Accessibility links
Homelessness Becomes A Crime In Hungary Laws in Hungary have criminalized homelessness at a time when the country is in financial crisis and poverty is on the rise. Homeless advocates say the laws are too harsh, but proponents argue the crackdown is a necessary step in the road to cleaning up the country. 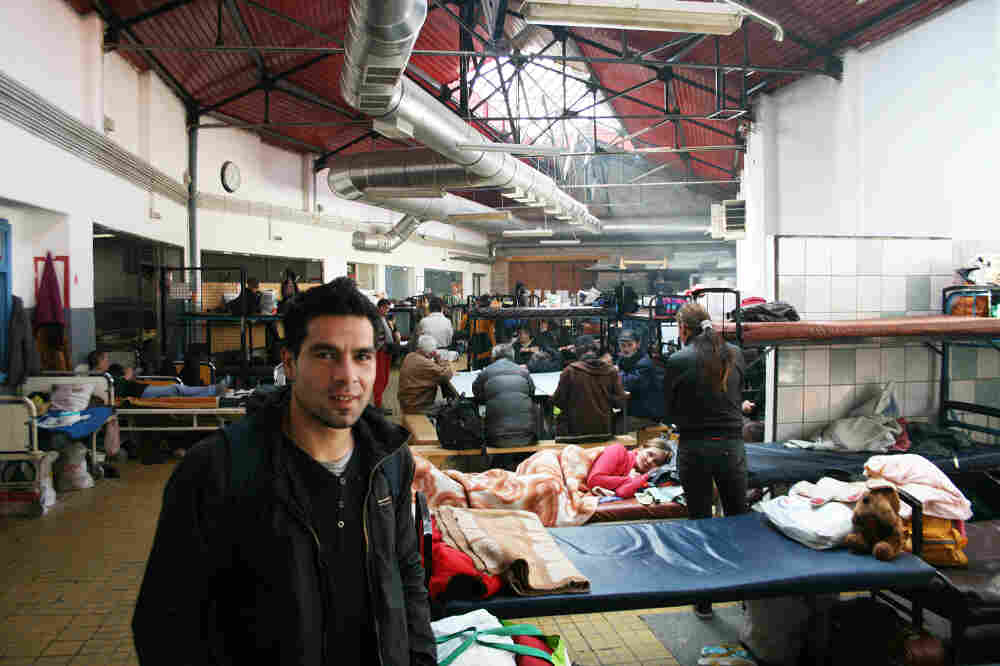 Zoltan Szarka is a 27-year-old unemployed construction worker. He grew up in and out of foster care, ending up in Budapest's Danko street homeless shelter after losing his job and apartment. Eric Westervelt/NPR hide caption 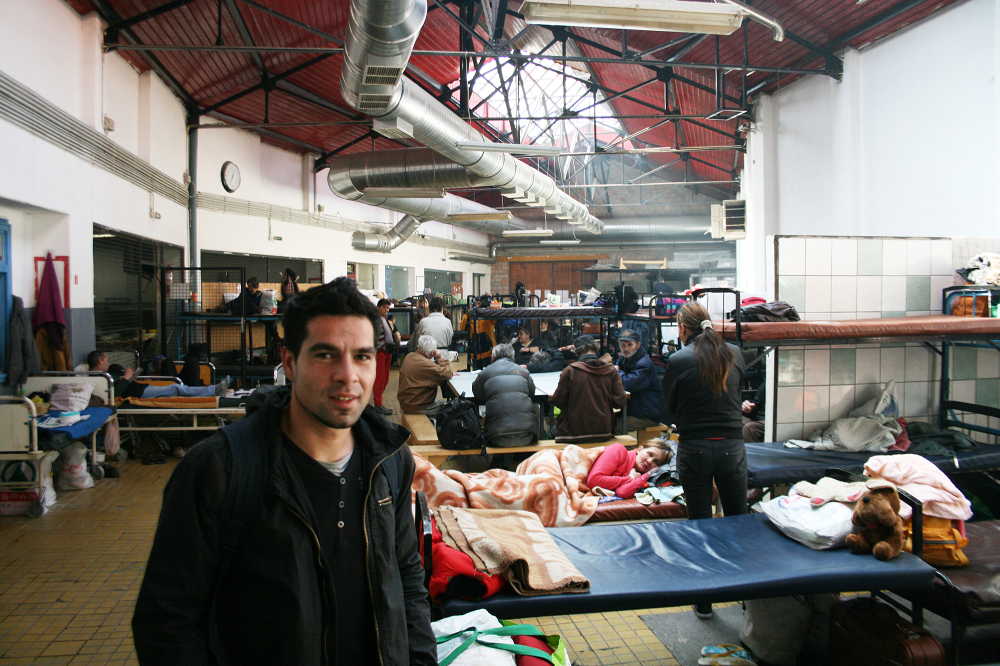 Zoltan Szarka is a 27-year-old unemployed construction worker. He grew up in and out of foster care, ending up in Budapest's Danko street homeless shelter after losing his job and apartment.

Hungary's new anti-vagrancy laws — the toughest in Europe — now mean that homeless people sleeping on the street can face police fines or even the possibility of jail time.

Advocacy and human-rights groups are alarmed by the new efforts to crack down on and effectively criminalize homelessness, where the ranks of the needy have increased during the country's dire financial crisis.

Debt, joblessness and poverty are on the rise. The country's bonds have been downgraded to "junk" status, and the nation's currency, the forint, has dropped sharply against the euro.

Hungary's homeless problem is on full display at the Danko street shelter, one of Budapest's largest, where 200 or more sleep every night.

I tried to find another job, I tried a lot. But I couldn't find anything. So my landlord had enough and kicked me out. And there was nobody there to help me; I don't have a family to lean on.

A group of disheveled older men in shabby bathrobes shuffles into the infirmary eating area for lunch. The pungent stench of men whose bodies and clothes need washing mixes with the smell of urine and lingering fumes from some kind of industrial cleaner.

One of a dozen ill men confined to the infirmary tries to eat lying down. Some of the dark brown souplike slop dribbles down his face. A man in the next bed is moaning and seems barely coherent. Another patient just stares ahead and touches his unshaven face.

A nurse works to maintain her smile and upbeat tone as she passes out slices of white bread. She opens a window for some much-needed fresh air. Dozens of men queue outside, waiting for a hot lunch.

If you call the Danko street shelter home, chances are you are truly destitute.

Advocates for the poor here estimate there are more than 10,000 homeless on the streets and in the shelters in the capital alone and some 20,000 more across the rest of Hungary.

In the shelter's cramped, barracks-like sleeping area, called "the heated street," homeless men and women spread out on thin mattresses on metal bunk beds. Others talk or play cards. A young man approaches. He wants to show me his pencil drawings. 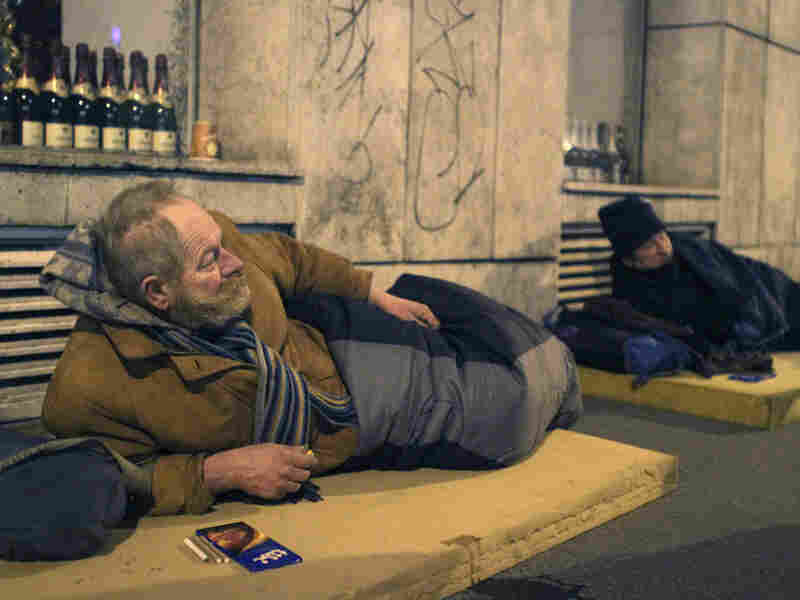 Two homeless men lie on mattresses in central Budapest in 2010. Hundreds of people live on the streets in the Hungarian capital; many refuse to stay in night shelters for fear of having their goods stolen. Karoly Arvai/Reuters/Landov hide caption 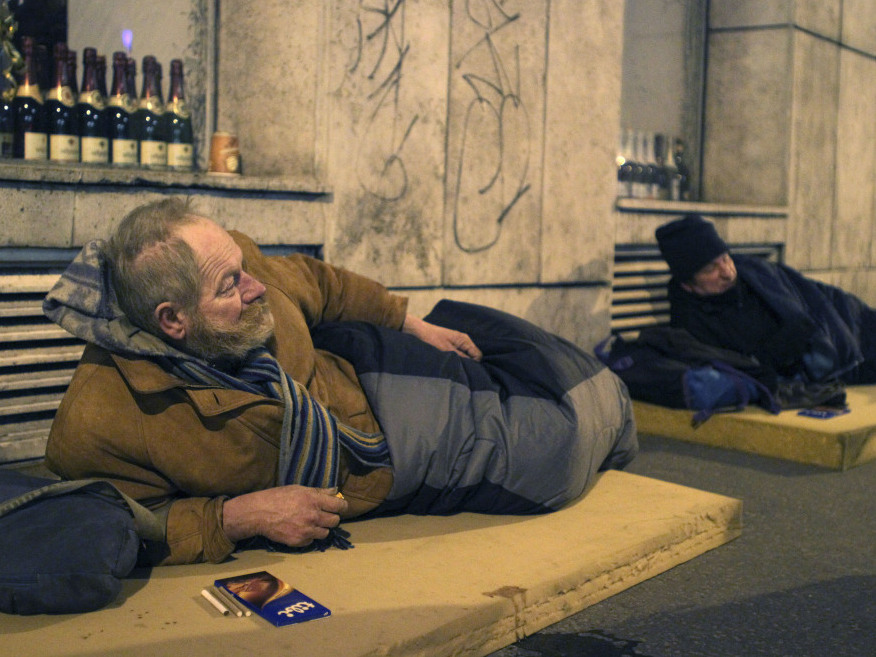 Two homeless men lie on mattresses in central Budapest in 2010. Hundreds of people live on the streets in the Hungarian capital; many refuse to stay in night shelters for fear of having their goods stolen.

Zoltan Szarka, a 27-year-old jobless construction worker, has called this place home for the past 3 1/2 months. He says he was in and out of foster care when he was growing up and has been on his own and mostly out of luck since he was in his late teens.

He takes his pencil sketches out of a flimsy folder. The self-taught artist's drawings are rough and a bit bawdy, but show promise.

"My parents abandoned me at the hospital when I was a baby," Szarka says. "I don't know anything about them. Drawing, my art, is what keeps me alive; this is what gives me strength, otherwise I would fall."

He lost his job at an amusement park and then as a laborer. This winter, he says, his construction company boss simply refused to pay him.

All the noise can disturb the neighbors, and often people who live in the building start complaining. But when the noise of the hammer and saw stops, everybody is happy to live in a new home where every detail has been changed and renovated for the good of the area.

"And then I couldn't pay my rent," he says. "And I tried to find another job, I tried a lot. But I couldn't find anything. So my landlord had enough and kicked me out. And there was nobody there to help me; I don't have a family to lean on."

Increased Harassment On The Street

Lately Szarka's rough life has been made even harder by an increase in police harassment. Under a mix of local and national laws, homeless on the street in Hungary now risk steep fines and more.

"The new law ... I think is unique in Europe and the only one of its kind in Europe that makes sleeping on the street a crime that's punishable by jail," says Tessza Udvarhelyi, a Budapest community organizer and co-founder of the group The City is For All.

"[Hungary] is actually enforcing it, as was the case with [Budapest's] 8th District where they actually enforced it en masse and they detained hundreds of homeless people for sleeping on the streets or begging or rummaging," Udvarhelyi says. "The current government is not only criminalizing homeless people, but poor people as well."

In addition to Budapest's street-sleeping ban, a new federal law allows police to arrest homeless who've been "caught" or cited for sleeping on the street twice in a six-month period.

In recent years, several districts in Budapest made it illegal to rummage through garbage and beg on the streets, and local politicians created so-called homeless-free zones. But Udvarhelyi says under the current right-wing Fidesz government the crackdown has become more intense and systemic. 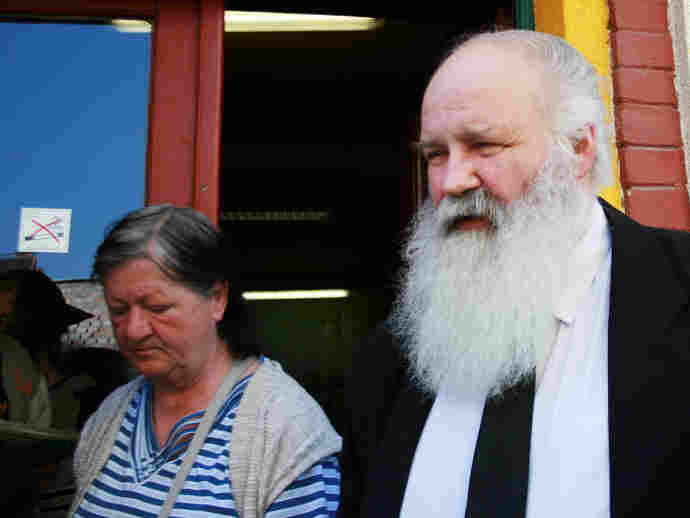 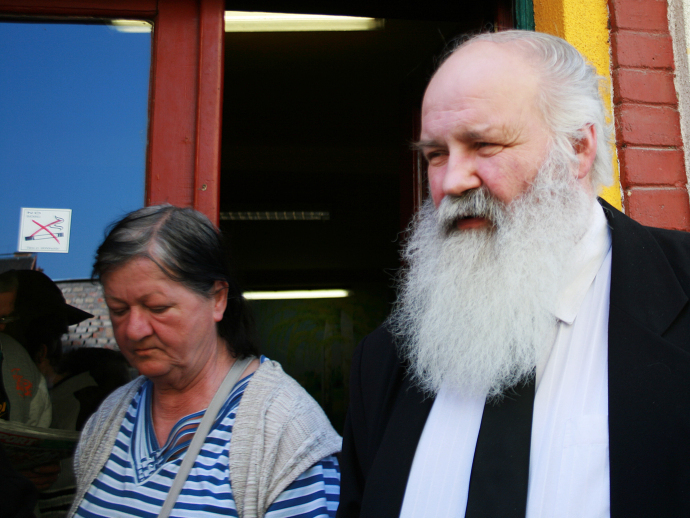 Gabor Ivanyi is a Methodist pastor and homeless advocate who runs the Danko street shelter.

"They are creating this discourse that people sleep on the street out of choice, and not out of necessity, which is totally false," Udvarhelyi says. "They are sleeping on the streets because there is nowhere else to go and the state does not take the measures that are necessary to provide housing for everyone or some kind of, at least, transitional shelter."

Fines, But No Arrests, So Far

Budapest police and city authorities refused to give statistics on the number of homeless who have faced fines up to the equivalent of about $650. The group The City is For All estimates that at least 300 homeless have been fined so far. No homeless, as yet, have been arrested.

Methodist pastor Gabor Ivanyi, 61, who runs the Danko street shelter, says obviously the homeless can't afford to pay the fines. He charges that conservative Prime Minister Viktor Orban and his Fidesz allies have substituted harassing the underprivileged for creating a viable strategy for housing and assisting the poor.

"What Orban wants is to get rid of the poor, and everybody who deals with the poor is seen as an opponent," Ivanyi says. "The police permanently bully the homeless. This is not the solution of a civilized or Christian state when security personnel drive around and hunt the homeless!"

Matd Kocsis is the mayor of Budapest's 8th District, which has long been troubled by problems of drug abuse, homelessness, petty crime and prostitution. Kocsis was the first in the city to start enforcing the tough, new anti-homeless ordinance. He refused an interview request. But at a recent rally he likened his Fidesz party's reforms to fixing up a big apartment.

"All the noise can disturb the neighbors, and often people who live in the building start complaining," Kocsis said. "But when the noise of the hammer and saw stops, everybody is happy to live in a new home where every detail has been changed and renovated for the good of the area."

Many are not buying that analogy. The United Nations' point person on extreme poverty and human rights recently called on Hungary to reconsider its anti-homeless legislation. Noting that the policy comes during an unprecedented economic crisis, the U.N. Special Rapporteur on extreme poverty, Magdalena Sepulveda, said Hungary's poor need help and housing, not handcuffs.

"This new legislation is being implemented in a context in which the economic and financial crises have resulted in a growing number of families living in the streets," Sepulveda wrote. "Instead of using public funds to assist these families, Hungary is carrying out costly operations to penalize them for their life-sustaining behavior."

Hungary can ill afford to alienate more European allies. The country is currently trying to fend off European Union legal action over aspects of its new Constitution that officials in Brussels say violate EU law, especially on the independence of the judiciary, the central bank and a new data protection agency. Hungary is also seeking a $26.5 billion loan from the IMF, which the EU needs to sign off on.

To some, Hungary's crackdown on the homeless is symptomatic of a larger issue: Hungarian society has yet to really face up to the deep poverty and social problems since the transition from communism to capitalism just over two decades ago.

At the Danko shelter, Szarka, the aspiring artist, simply dreams of getting out of the shelter system and eventually out of Hungary.

"I'll try again to find a job, again I'll try to learn a foreign language, any foreign language. And then I think I'll have courage to leave Hungary. Maybe I'll try to go to France. That's where the artists are, right?" Szarka asks, then ambles away, his drawings tucked under his right arm.