Accessibility links
100 Years Later, Titanic Lives On In Letters It's been 100 years since the sinking of the RMS Titanic, and the anniversary brings with it a barrage of literature. Former NPR editor Rachel Syme has been keeping track of the new releases and lists her favorites here. Do you have a favorite Titanic book? Let us know in the comments. 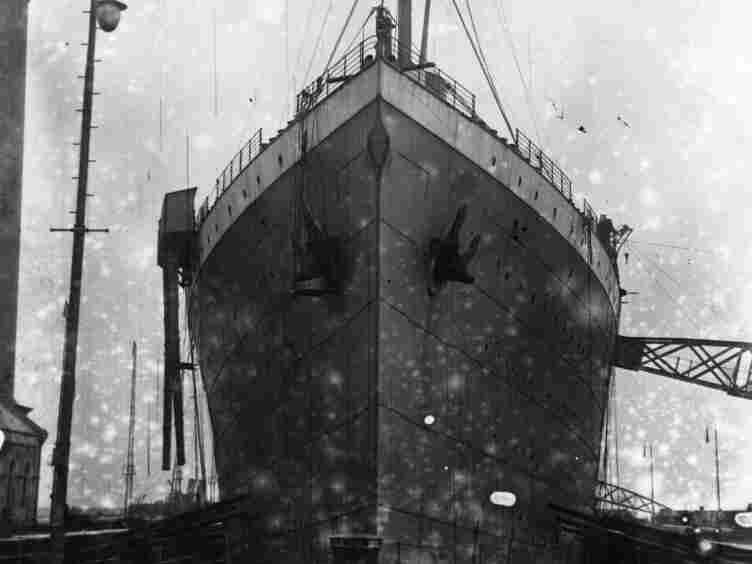 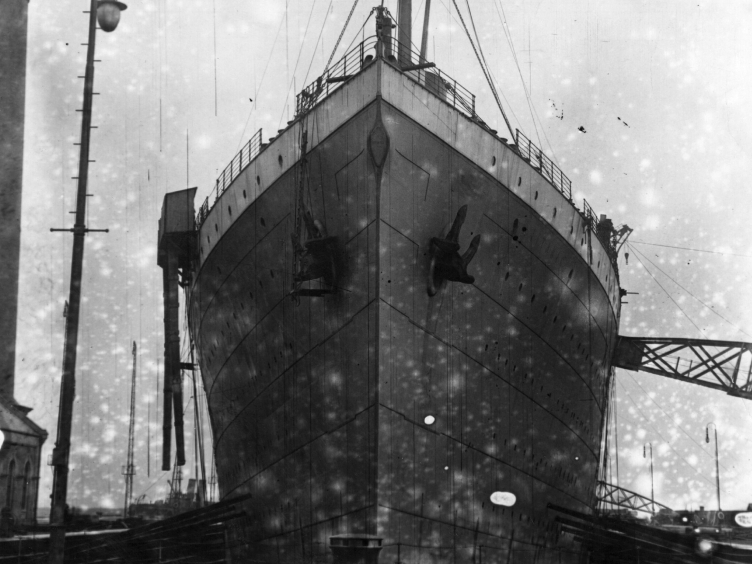 The ill-fated Titanic rests at Harland and Wolff's shipyard, Belfast, in February 1912.

When I hear the word "Titanic," I picture a tuxedoed Leonardo DiCaprio, waiting at the bottom of a gilded staircase while the voice of Celine Dion swells in my mind. It's all Edwardian glitz and glamour, decadence and passionate love, the kind best enjoyed in a dark theater with plenty of popcorn. And then I quickly remember that the ship sinks, and that Titanic is more than just an epic film from my youth. On April 15, a century will have passed since the ship plummeted into the icy Atlantic, and it is the tragedy we should remember, not just the mythology surrounding it. A movie can help us picture the events — I know I will be catching the new 3-D version of the film as it returns to theaters for the anniversary — but it can't fully capture the heartbreaking stories and fascinating discoveries tied to the Titanic. For a more complete understanding, we must turn to books.

Fortunately, there are hundreds out there. And with the centennial comes a boatload of new titles, from glossy coffee table commemorations to memoirs by the scientists who have poked around inside the wreckage. Titanic experts, Gilded Age historians and nautical novelists have picked this moment to deliver their thoughts on the sinking. Here are a few of my favorites.

by Tim Maltin and Nicholas Wade

First up is Titanic: First Accounts, a new compendium of testimonials from survivors compiled by Titanic expert Tim Maltin, featuring a gorgeous new illustration of the ship on the cover. Among the voices heard from in the book are the "Unsinkable" millionaire Margaret, or Molly, Brown and scholar Lawrence Beesley, who recalls the "great sense of loneliness" those on the lifeboats felt when the hulking ship tilted up out of the water and then vanished. There is no historian who can put into words the events of that night as hauntingly as those who were there, watching the Titanic's final minutes in the darkness.

Down With The Old Canoe: A Cultural History Of The Titanic Disaster

Historians write to help us to understand the larger context of an event, and Steven Biel does just that in Down with the Old Canoe, a cultural history of the Titanic that has been reissued to mark the anniversary. In his book, Biel describes the world that brought Titanic into the seas: the hubristic Gilded Age and its overreaching industrial dreams. In fresh and fast-moving prose, he also explores the aftermath — both the press frenzy and the larger political legacy.

How To Survive The Titanic: The Sinking Of J. Bruce Ismay

Title
How to Survive the Titanic
Subtitle
The Sinking of J. Bruce Ismay
Author
Frances Wilson

It's fascinating to read about the hype behind the ship's maiden voyage — hype that may have led its owners to push the ship faster toward New York for a surprise early landing. One of those owners was J. Bruce Ismay, who, as legend has it, requested that Capt. Smith increase the Titanic's speed, putting the ship in a dangerous position in an ice field. Ismay escaped the ship at the last minute, an act later viewed as cowardly, as most of the Titanic's crew and management stayed aboard to go down with it. When he returned home, Ismay was met with public humiliation and a brutal investigation. His dramatic story comes to life in Frances Wilson's biography, How to Survive the Titanic: The Sinking of J. Bruce Ismay. Wilson writes eloquently of this classic Icarus tale: Ismay flew too close to the sun and paid dearly for it with his reputation and his pride.

Lifeboat No. 8: An Untold Tale Of Love, Loss, And Surviving The Titanic

Ismay was in Lifeboat C, but the story of another lifeboat, No. 8, is just as turbulent. In her new e-book, aptly titled Lifeboat No. 8, journalist Elizabeth Kaye chronicles the lives of the passengers who ended up together on that tiny vessel, including the wealthy Countess of Rothes and her maid, Roberta Maioni, who fell in love with the Titanic's radio operator, Jack Phillips, while onboard. Kaye suggests that this ill-fated love story may have inspired the blockbuster film.

Reading book after book about a tragedy can be overwhelming. If you find you want a fictional escape, then it's time to turn to a new novel called The Dressmaker. Written by Patricia O'Brien under the pen name Kate Alcott, the novel tells the tale of Tess, a young seamstress who comes aboard the Titanic as an apprentice to the fashion designer Lucile Duff Gordon. Tess survives, but back on dry land things begin to get interesting. The book explores the complicated gender dynamics of the time, and offers a heroine you can really root for.

These books cover a range of emotion, but it is important to take in both the sorrowful and uplifting stories about the tragedy. Titanic is far more complex than any one love story or corny song, and there are still thousands of stories waiting to be told, from the depths, in the next 100 years.

Rachel Syme is a frequent contributor to NPR Books and a former culture editor at The Daily Beast.