Accessibility links
Foreign Policy: The Mess In Mali On March 22, the Malian military initiated a coup against democratically elected president, Amadou Toumani Toure. In the intervening time, Tuareg rebels have conquered much of the country. Gregory Mann of Foreign Policy explains how the war on terror ruined a success story in West Africa. 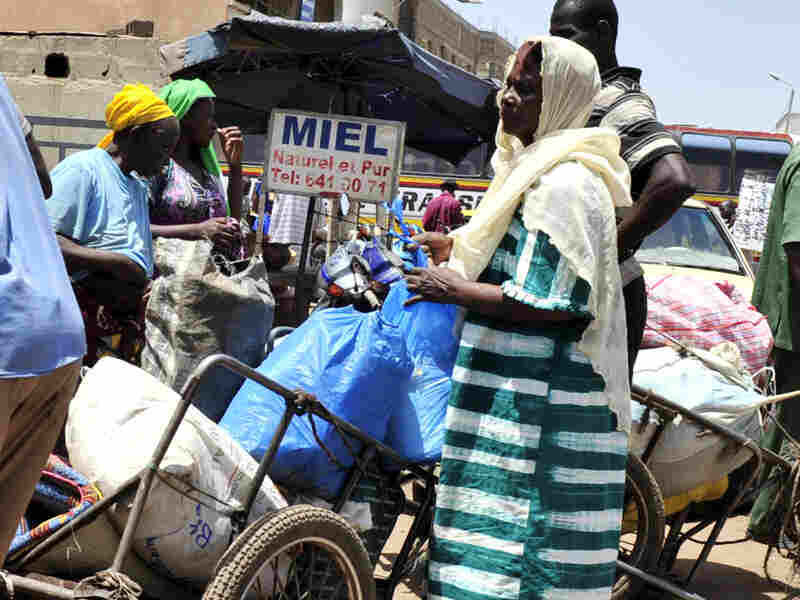 People arrive from the northern city of Timbuktu on April 4, 2012 at a station in Bamako after two days travel. World leaders scrambled to stop Mali's descent into chaos, two weeks after a coup in Bamako touched off a sequence which saw Tuareg rebels backed by radical Islamists conquer half the country. Issouf Sanogo/AFP/Getty Images hide caption 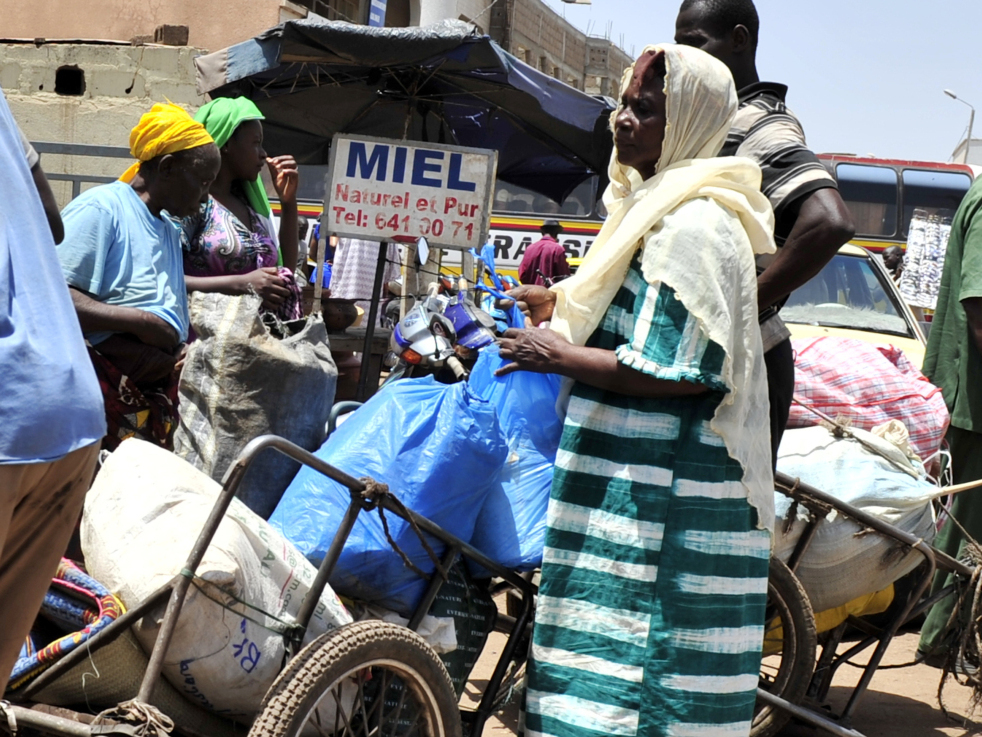 People arrive from the northern city of Timbuktu on April 4, 2012 at a station in Bamako after two days travel. World leaders scrambled to stop Mali's descent into chaos, two weeks after a coup in Bamako touched off a sequence which saw Tuareg rebels backed by radical Islamists conquer half the country.

Gregory Mann is a professor of history at Columbia University, specializing in the history of francophone Africa, and of Mali in particular.

It would be hard to overstate the mess that's been made out of Mali over the last fortnight. A surprise coup, an accelerating rebellion that has split the country in two, and an economic embargo by the landlocked country's neighbors have battered what had been, until recently, a West African success story. Add to that a looming food crisis in the northeast, and you have quite a fine mess. But the world can't turn away: Mali is too important to write off the country's 20-year old democracy as a failed experiment.

The coup was not accidental, as some have argued, but it was definitely improvisational. On March 22, a mutiny in the country's main garrison turned into a coup d'état as soldiers and junior officers chased President Amadou Toumani Toure from his palace. The coup leaders, angered by a lack of military material and political will to suppress a rebellion in the country's vast Saharan region in the north, dubbed the junta a "National Committee for the Re-establishment of Democracy and the Restoration of the State" (CNRDRE).

Its name aside, the junta aims to destroy, not to establish, democratic rule — the coup took place little more than a month before a scheduled presidential election, in which Touré was not a candidate. Since then, Mali's political parties, trade unions, and civil society organizations have with near unanimity formed a common front with one goal — to reject the junta and demand a return to civilian rule. Internationally, the regional group ECOWAS slapped harsh sanctions on the junta and threatened military intervention if the constitutional regime is not restored.

The junta now has its back to the wall, and it is becoming increasingly clear that the coup leader, Cpt. Amadou Sanogo, has no real plan to extricate himself from this disaster. The junta's actions have been erratic: It staged the coup in order to fight the war in the north, but then sought peace negotiations with the Tuareg rebels. It proclaimed a new constitution, then rescinded it. And it announced a national conference, only to cancel it when its domestic opponents refused to attend.

In an interview published on April 4, Sanogo claimed that if the situation was allowed to fester, "both Africa and the whole world will one day be its victims." For the first time in the past two weeks, what he's saying makes some sense.

A Tuareg separatist movement called the MNLA has exploited the chaos in the capital to pursue its dream of an independent state in what it terms "the Azawad," an old regional catch-all newly redefined to include most of the Malian Sahara north and east of Timbuktu. The MNLA and various Saharan rebel movements have been at war with the Malian army since January, and the army has been losing consistently. It has suffered a double humiliation: Both Touré and now Sanogo have ordered soldiers to retreat rather than fight, and those units that have stood their ground have been over-run. In one particularly gruesome episode, defeated soldiers in the northern town of Aguelhoc had their throats slit, and images of the atrocity circulated widely.

But though the MNLA has a secular nationalist bent, the rebellion in the north is helping Islamist extremists expand their foothold in the country. The MNLA has been in a loose partnership with Ansar Dine, an Islamist group led by Iyad ag Ghali, a Tuareg who led a major rebellion in the 1990s. Ag Ghali's career is a testament to the tangled web of alliances in the region: His most recent gig was in Libya, where, according to reports, Libya's transitional government encouraged him to lead a large-scale defection of Tuareg fighters from Muammar al-Qadaffi's security forces.

Ag Ghali obliged, but the Libyan rebels' gain was the Malian government's loss when he brought several dozen men in arms into a situation in which a rebellion was already simmering in the Malian Sahara. Since then, he's fallen in with the MNLA, and he seems to have a productive working relationship with al Qaeda in the Islamic Maghreb (AQIM). The warriors of Ansar Dine care less about an independent Azawad than they do about an extreme Islamist program. Ansar Dine doesn't communicate much — theirs is not a media operation — but it's their black flag that now flies over the northern towns of Timbuktu and Gao.

This partnership is a sticky one. Outside attention is focused on Ansar Dine, but their fighters number only around 200 to 300 men, are locally unpopular, and hold long-term goals that seem to be at odds with those of the MNLA. The latter has many more, and recently received a big boost when one of the Malian army's Tuareg commanders defected, bringing with him several hundred men. Still, the MNLA's military strength is thought to be limited, and the battle-hardened and well-armed men of the Ansar Dine appears increasingly to have taken the upper hand.

The MNLA is aware that the real war for the Azawad will be waged by its media wing. Refusing to be governed by the people of the south and harboring great resentment over the harsh repression of past rebellions, the MNLA wants to be seen as a legitimate nationalist movement. Colluding with the Ansar Dine adds extra bite to MNLA's bark, but it also discredits a movement that wants desperately to be taken seriously by outside actors, particularly France. Talking sharia won't help with that — nor will stories coming out of Timbuktu and Gao regarding the imposition of a crude, vigilante version of Islamic law. There is no quicker way for the MNLA to lose its thin veneer of respectability than to keep hanging around with the wrong crowd.

Mali has already paid a high price for the failure of French anti-terrorist policies in the Sahara. Mali was long spared the trauma of having its Western visitors kidnapped — a practice that over the last few years has become one of the Sahara's most profitable industries, generating millions of dollars in ransoms. After a bloody 2010 Franco-Mauritanian raid aimed at rescuing a French hostage from AQIM — a raid that took place on Malian territory, but without Touré's knowledge — that all changed. Seven members of AQIM had been killed. Later, the hostage would be, too, but AQIM still wanted revenge: no more gentlemen's agreement not to raid on Malian territory.

Mali became a hunting ground for potential hostages, kidnapped by freelancers or on commission, who could be sold to AQIM. Worse, France dealt a brutal blow to Mali's important tourist industry and its international reputation by effectively declaring the country a "no-go zone."

At the same time, both France and the United States were pushing the central government to reassert control in the desert. In spite of promises made over the last 15 years by successive Malian governments to assure the autonomy of the Saharan region, the zone was being remilitarized. Bringing a halt to that process is where the interests of the secular nationalist MNLA, the newly emergent Ansar Dine, and perhaps AQIM intersect.

Did the Libyan conflict — and NATO's intervention in it — light this long fuse? Did Mali lose Timbuktu because NATO saved Benghazi? Informed observers disagree. Some think the conflict was virtually inevitable, with or without men and arms from Libya. Others see a direct knock-on effect from Libya that upset a delicate balance. Whatever the case, it is undeniable that, as a consequence of the Libyan campaign, a stronger, more intense insurgency in the Malian Sahara was not only predictable but predicted. Everyone who was watching saw it coming from afar.

What's the fruit, then, of American action in the Sahel over the last several years? It might be too soon to say definitively, but it appears to be a bitter one. Much has been made of the fact that Sanogo has American military training, and briefly affected a U.S. Marine Corps lapel pin. Those details — and the fact that he apparently speaks English — are surely less important than the stunning fact that a decade of American investment in Special Forces training, cooperation between Sahalien armies and the United States, and counterterrorism programs of all sorts run by both the State Department and the Pentagon has, at best, failed to prevent a new disaster in the desert and, at worst, sowed its seeds.

Signs of the failure of U.S. counterterrorism policy in Mali abound wherever one looks. Military cooperation and training have not helped the army to hold the line in the north, and all the training in the world was not going to convince Touré to lead Mali into fighting what he termed "other people's wars" in the desert. Now it is no longer his decision to make, and the country's future leadership will have no choice but to prosecute a war that has become its own. The national territory is now divided de facto, but neither Mali nor its neighbors will accept its division de jure.

At the moment, the political game in Mali resembles two games of three-dimensional chess being played simultaneously. The first game is in the capital, where Sanogo is in over his head and seems to have no real plan for what to do next. That political game is currently at a stalemate, but a variety of opponents are looking to maneuver Sanogo into checkmate. In the second game, the Malian Sahara represents both the board and the prize — and neither the Malian military nor its rivals knows what the rules are. But the game is on.