Accessibility links
How Murdoch's Aussie Papers Cover Climate Change
Rupert Murdoch's News Corp. sells an overwhelming majority of all newspapers read in his native Australia and holds a controlling interest in the leading cable news channel. With such dominance, the Murdoch press there draws careful scrutiny of how it covers sensitive issues. 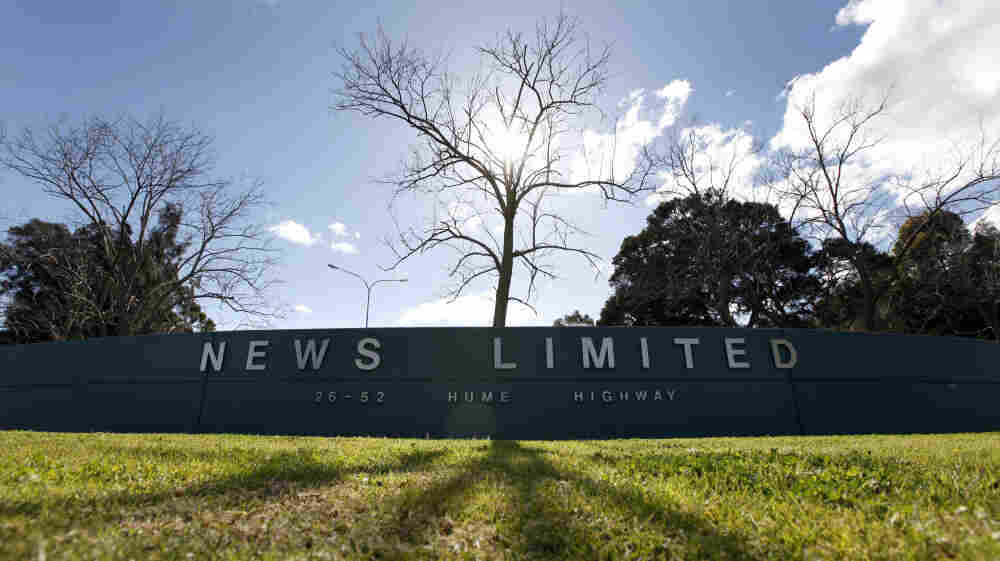 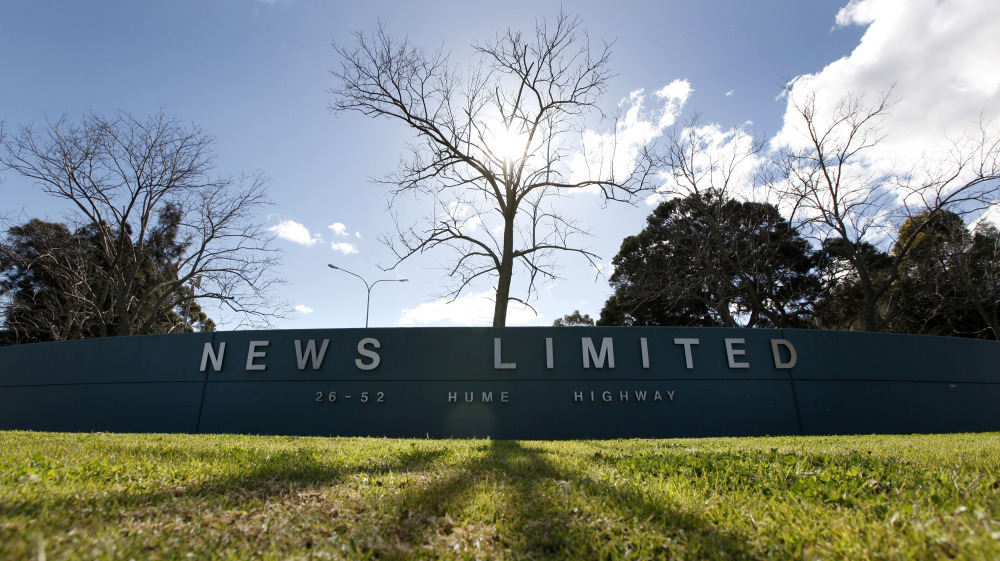 Some weeks ago, I paid a visit to an eggshell-blue house in Newtown, a neighborhood on the west side of Sydney, to Wendy Bacon and her husband, Chris Nash.

Other Stories In This Series

As we sat on the porch of their book-lined home, they pointed with pride to the Australasian trees and blooms defining their interior courtyard.

And then Bacon delved into her own harvest: the results of a case study about how the country's newspapers handled a pressing and contentious issue.

Bacon, a professor of journalism at the University of Technology in Sydney, commissioned researchers and graduate students to examine six months' worth of every article, feature piece, editorial and columns in 10 leading Australian papers on a proposal by the governing Labor Party to tax carbon emissions.

"What our study showed is that the majority of Australians are not getting a balanced or diverse view on a policy which was designed — at least in a small way — to tackle this problem," Bacon said.

Seven of the 10 papers studied were part of News Corp.'s Australian newspaper arm, News Limited. The overwhelming majority of newspapers sold in the country are owned by Rupert Murdoch's company. With such dominance of the press, the Murdoch papers draw careful scrutiny of how they cover sensitive issues.

During my time in Australia, journalists said the Murdoch papers, to varying degrees, are receptive to those who question the science underlying projections of climate change.

That holds true from the populist tabloids to the respected, if combative, national newspaper The Australian — even if the Oz, as it's commonly called, has more nuanced and extensive coverage. (News Limited's paper in the Tasmanian state capital of Hobart, where residents are more liberal, is seen to take a more pro-environmental tack.) 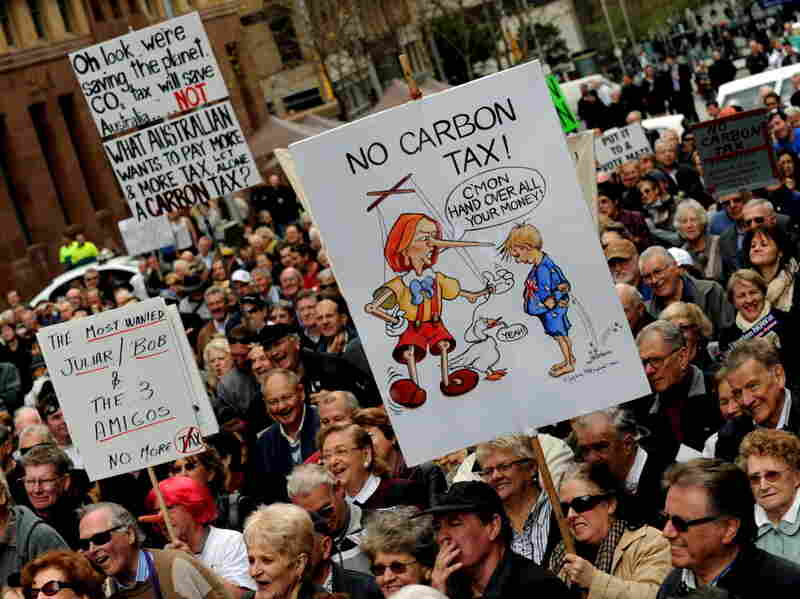 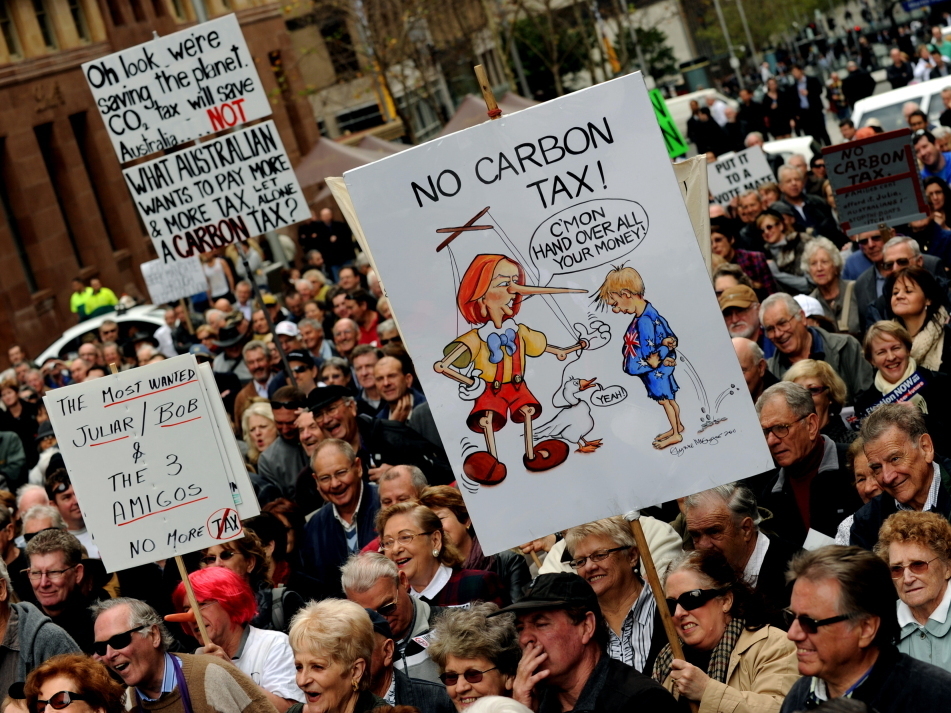 Bacon said she wanted to see if those papers' coverage fit or disproved that anecdotal impression. The study found News Limited exceeded it. Researchers were told to characterize stories as neutral if there was any doubt about their thrust, and a sizable number were characterized that way. Still, negative articles about the proposed carbon emissions tax in Murdoch's newspapers outweighed positive ones 82 percent to 18 percent.

The remaining papers were more balanced, with the two papers from rival Fairfax Media offering slightly favorable coverage overall. But much of the coverage was based on slight sourcing and conveyed the sense that there was a scientific debate over climate change — not just a political one over what, if anything, to do about it.

Bacon said that all adds up to a campaign by the Murdoch press against the governing Labor Party's policy rather than tough-minded scrutiny of it. Australians, she said, simply weren't getting enough insight about the science or the politics to be able to make informed decisions.

"If that's happening on that one issue, well, it's certainly happening on other issues," Bacon said. "Given that Murdoch is so dominant, we have to at least recognize the very big influence, a big potential influence, on public opinion wielded by one company."

The surprising thing is Murdoch himself staked out a different stance for his own company quite publicly five years ago while citing below average rainfall in his hometown of Melbourne and drought in his native Australia. Speaking in New York City in spring 2007, Murdoch pledged to make his company carbon neutral over time.

"Now, I realize we can't take just one year in one city or even one continent as proof that something unusual is happening. And I am no scientist. But there are signs around the world, and I do know how to assess a risk," he said. "Climate change poses clear, catastrophic threats. We may not agree on the extent, but we certainly can't afford the risk of inaction."

Murdoch and his executives and journalists at News Limited declined to be interviewed for this story. Greg Baxter, News Limited's then-director of corporate affairs, denounced Bacon at the release of her study by asserting she lacked credibility and that the company regretted that she was able to teach students.

Baxter told the news site the Conversation that The Australian "believes that humans are warming the planet — but obviously there is doubt among those who claim otherwise" — and that the paper favored a market-based solution.

"The fact that Wendy Bacon produces a piece of research that is negative about this company is no surprise to anybody," he said. "She's been doing it for 25 years."

Baxter has since left that job and could not be reached for comment.

Bacon is a recipient of the Walkley Award — the Australian equivalent of the Pulitzer Prize — for her work exposing police corruption. She told me she was dumbstruck by the personal nature of the reply, saying she had done little research about the Murdoch press until recently.

The Australian has aggressively opposed the Green Party's agenda of addressing climate change through greater regulation and taxation of pollution. Two years ago, the paper vowed in an editorial that it would seek to destroy the party at the ballot box.

At an academic conference in fall 2010, a former environmental reporter at The Australian, Asa Wahlquist, said she fought with editors routinely over the extent and nature of her coverage

"I couldn't do it anymore," she told attendees, including environmental activists. "I hung in there for a long time because I thought it was important that at least I was in there trying."

The scholar and journalist Robert Manne wrote a lengthy critique of The Australian in which he, too, devoted a section to reviewing its climate change coverage. His conclusions echoed those of Bacon.

"On balance, the opinion pieces and the news coverage in the paper was on the side of those who were against the climate scientists," Manne said. "And that might be playing into the hands of the group I call the 'denialists' because all they have to do is create doubt in the public mind to make it much more difficult for politicians to take action."

The top editors and executives at The Australian took umbrage at that assessment, as well.

Bacon found the most negative coverage in the country's top-selling Murdoch tabloids — the Melbourne Herald Sun and the Sydney Daily Telegraph. The Herald Sun's Andrew Bolt is said to be the top-read columnist in Australia. He presents as an outright skeptic of climate change, at one point calling competing newspapers that treat it as settled science "propagandists."

The topic is a frequent subject of his political opinion show on the broadcast Network Ten.

That network is not owned by News Corp., but its chairman is Lachlan Murdoch, who remains a corporate director and major investor at his father's company.

The journalists I spoke to in Australia tell me they have a tough time reconciling Murdoch's corporate announcement in 2007 with the coverage in his papers.

"Everybody was rather taken aback and it seemed to change the editorial tone of climate change coverage for a very short period of time — but not very long. I think it lasted a year, perhaps less," said Monica Attard, a former foreign correspondent, media critic and host for the ABC, Australia's public broadcasting network.

"And then we were all left scratching our heads as to what Rupert's missive that News Limited was to become a green company was actually all about," said Attard, now managing editor of the online Global Mail, based in Sydney. "Nobody quite understood. Perhaps they turned the lights off at night. We weren't really sure."