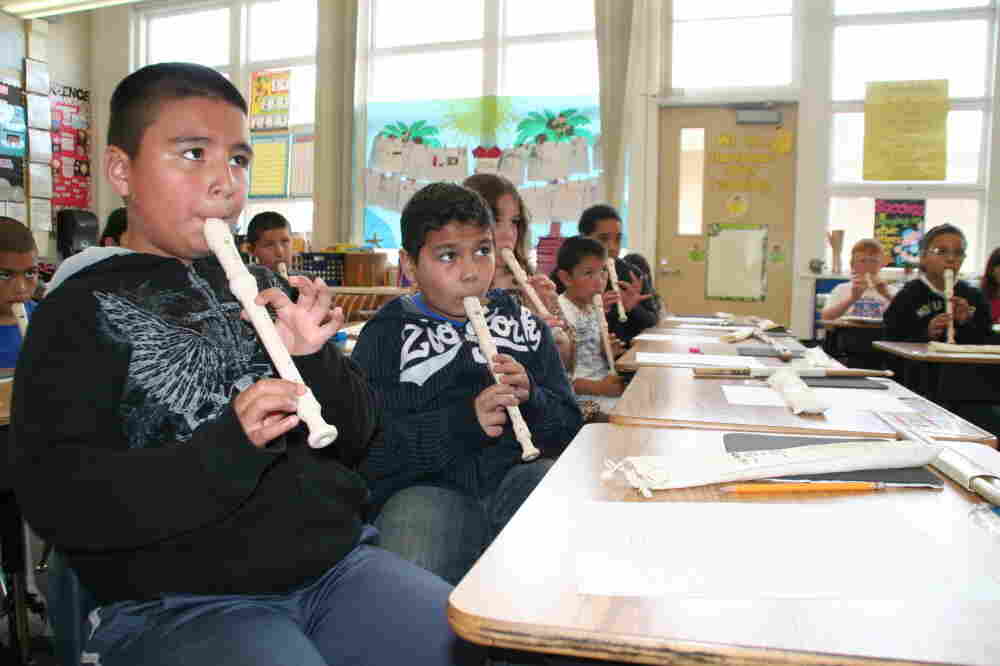 Math teachers know that fractions can be hard for the average third-grader. Teachers at a public school in San Bruno, Calif., just south of San Francisco, are trying something new. They're teaching difficult math concepts through music, and they're getting remarkable results.

At Allen Elementary School, a roomful of third-graders sits facing music instructor Endre Balogh, their backs straight, eyes ahead, beating a mouse pad with drumsticks. As Balogh taps a rhythm, the students follow.

"What kinds of notes did you play?" Balogh asks. "Jasmine, what do you think?" Jasmine gets it right. "Eighth notes, very good."

These students are learning fractions.

"So, like two-eighths plus six-eighths, you have eight-eighths. But, since it's in the music, it equals a whole note," explains 9-year-old Donte Arevalo.

In the program, called Academic Music, students first learn the basics of reading notes. Then, they learn how to add notes, which is essentially adding fractions. Balogh is drawing the music notes on the board and adding them together.

"How many eighth notes do you see?" he asks. A student responds correctly. "Now, I wonder, what should I write here because this is tricky?" Another student has the right answer.

From there, it gets harder. Students learn how to add uncommon denominators and multiply fractions. 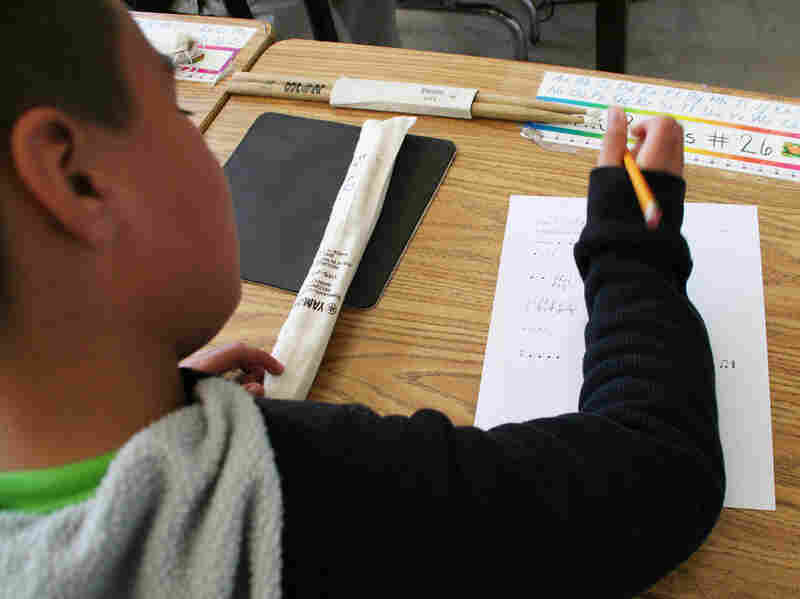 A student at Allen Elementary fills out a worksheet where music notes are converted into fractions. Caitlin Esch/KQED hide caption 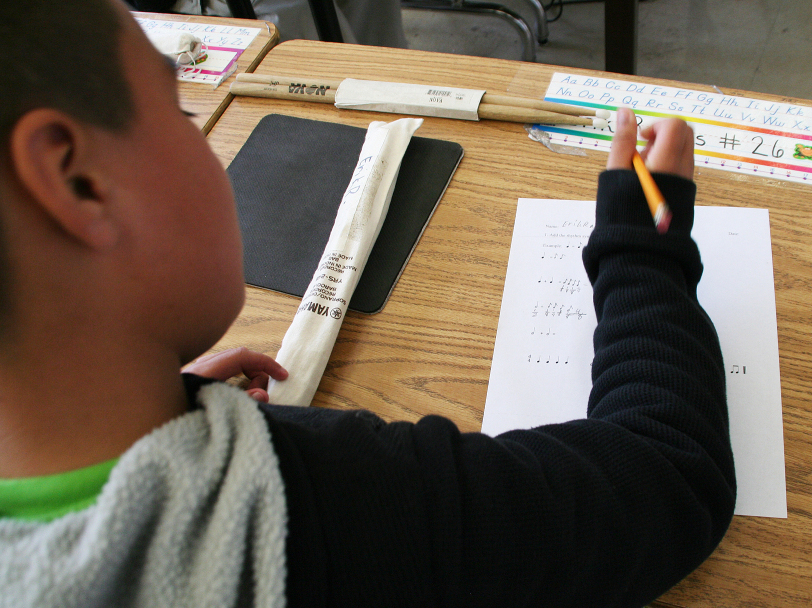 A student at Allen Elementary fills out a worksheet where music notes are converted into fractions.

San Francisco State University researcher Susan Courey designed the curriculum with Balogh in 2007, because as a former third-grade teacher, she knows how tricky fractions can be.

"If you say, what's bigger one-eighth or one-fourth, they'll say one-eighth because eight is bigger than four," Courey says. It's all about visualization.

"But our students — because of the notes — know that all those little tiny eighth notes are a lot smaller than a whole note or a half note," Courey says.

In this class, more than half the students are English-language learners. Classroom teacher Gina Grites says Academic Music has especially helped her students, such as a little girl who volunteers to solve a problem, even though she barely speaks English.

"She knew that it was four counts and put it into a fraction," Grites says. "Just to have her get up and present in front of a class is a really big deal, and she raised her hand and wanted to, so I'm seeing a lot of these kids open up and want to try it, instead of hiding behind the desk and saying, 'Please don't call on me.' "

A recent study found that students who went through the program tested better on fractions. The average score of the Academic Music students was nearly double that of students in the regular math class. Courey says even low-performing students did better.

"That's what I, as a classroom teacher, want," she says. "I want to know that those students who typically are the underachievers are benefiting from the instruction that I'm providing."

Back in the classroom, 9-year-old Eric Bogren says he'd never played an instrument before Academic Music.

"It's really easy when it's music, but it's harder to do it when you're doing math," Eric says. For Eric, thinking of fractions as music notes, helps.

The curriculum designers hope to eventually make the program available for any third-grade teacher to use in the classroom.