Accessibility links
Company Ties Shoes And Ethics Together Gideon Shoes makes handcrafted hip-hop sneakers inspired, designed and marketed by young people at a youth center in a tough suburb of Sydney. But the company is struggling to balance its values with the brutal realities of production and competition. 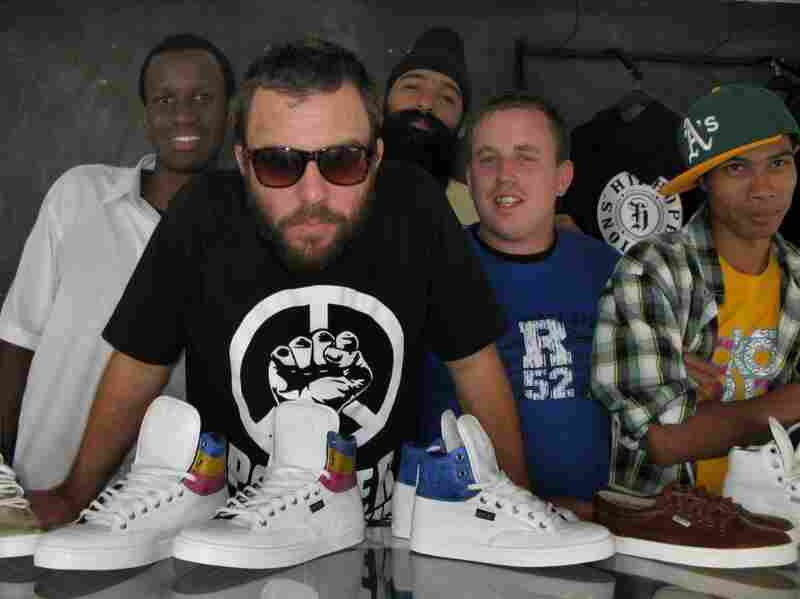 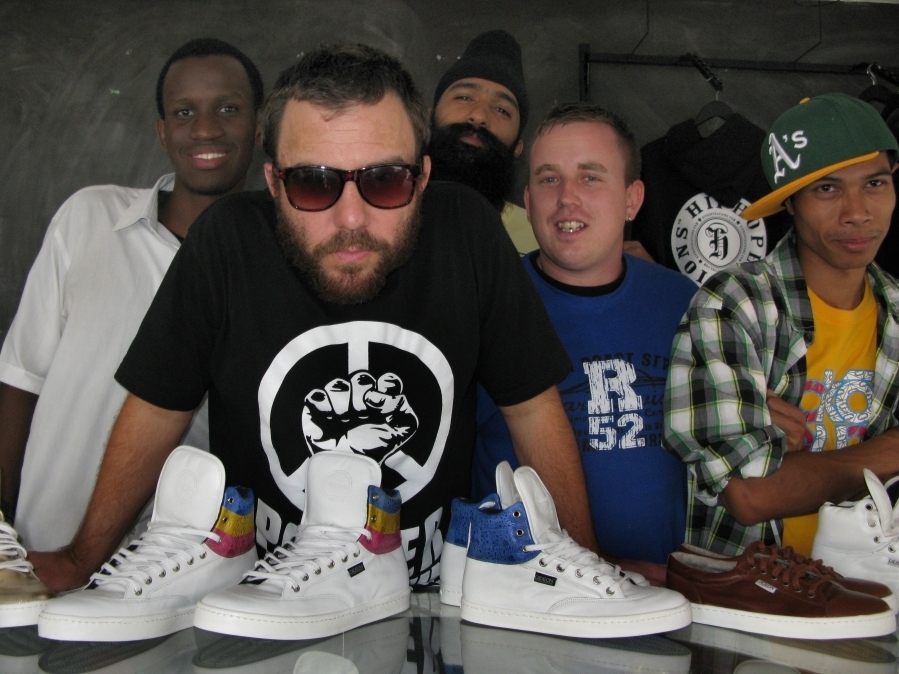 You don't go through corporate communications to meet the executive steering committee at Gideon Shoes.

Instead, you walk through a basketball court with graffiti-covered walls and into a sound studio. There, Gideon employees are warming up their talking points: rap lyrics.

"There's no excuses in this life, so I'm fighting on. ... The flame inside my heart is more like a firestorm," they rap.

The team is made up of Suhkdeep Bhogal from India, Thane Poloai from Samoa and Allan from New Zealand, who doesn't want to give his last name.

All are in their early 20s, and all are regulars at The Street University, a youth center in the immigrant working-class Liverpool suburb of Sydney, Australia.

Young people come here to play basketball, rap, break dance, do their homework, get counseling, and try to stay out of trouble.

This is where Gideon Shoes was born.

The tiny company is attempting to show the world that shoes can be made ethically, with the profits sent to a worthy cause — and still look cool. The hip-hop sneakers are inspired, designed and marketed by The Street University's young people.

Bhogal, whose rap name is L. Fresh, is The Street University's program coordinator.

"For me, it's bigger than just being a shoe," Bhogal says. "I love it because of the story behind it."

A Shoe With A Purpose

That story begins with Matt Noffs, the bearded, impassioned 32-year-old co-founder of Street University and grandson of Ted Noffs, a pioneering humanitarian who worked with troubled Australian youth.

"I wanted to produce a shoe that the world hadn't seen," Matt Noffs says. "And that's what we've done." 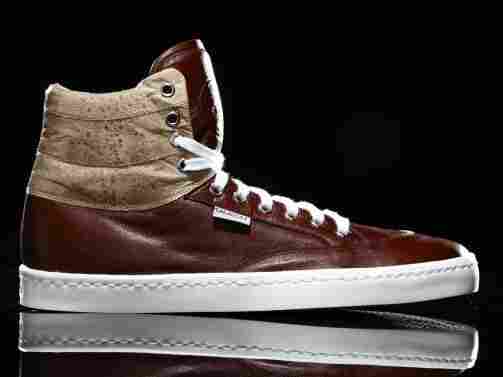 Gideon high-tops made of Australian cane toad leather. The company's sneakers are all handmade in Australia. Courtesy of Gideon Shoes hide caption 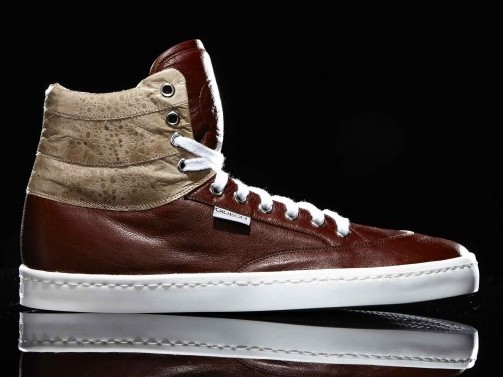 Gideon high-tops made of Australian cane toad leather. The company's sneakers are all handmade in Australia.

Gideon's main product is sneakers: high-tops and low-tops, white with colorful uppers. Some are made of kangaroo leather and even cane toad — a pestilential amphibian whose skin looks surprisingly spiffy when dyed pink and gold.

The 16-month-old company has a larger social purpose: The shoe line is an ongoing empowerment project. Gideon plows its as-yet-meager profits back into The Street University.

Yannick Mbadazi, a 17-year-old Rwandan who helped out with promotional events, is a walking advertisement for the company.

"Yeah, it's an awesome shoe, very trendy. So when you wear it and compare yourself to other people, you can stand out from the crowd," Mbadazi says.

Even so, Gideon Shoes is struggling as its idealism collides with the brutal economics of global production.

The company has received lots of free press from fashion blogs. Still, it sells only about 60 pairs a month, mainly over the Internet.

The main obstacle, Noffs admits, is pricing. His leather shoes cost between $190 and $320 a pair — significantly higher than their competitors at Nike, Puma and Adidas.

That's because Noffs chose to have them made in Australia, not China.

He says that wasn't his initial plan. "I thought, 'I'm gonna go and find an ethical factory in China.' "

But on an exploratory visit to Chinese shoe factories, Noffs and his brother Rupert saw workers with no masks using strong-smelling glue and workers who looked like teenagers. And they saw grim worker housing inside factory walls.

"When we got back to Sydney," Noffs says, "we decided we would definitely, under no circumstances ... produce shoes in China."

That decision put Gideon Shoes at a competitive disadvantage. Noffs estimates that a pair of sneakers that costs $5 to make in China costs him $100 in Australia.

"It's made it a lot tougher; it's made the road a lot harder; it's made it more expensive," he says. "And every time it looks really hard, I remind myself that we made it that difficult for ourselves from the beginning. And I'm proud of that."

The shoes are produced at J. Robbins Manufacturing in Sydney, a company that does small-batch work. On the air-conditioned production floor, Asian immigrant workers wearing face masks and gloves stand at machines, stitching and gluing shoes together.

Manager Tony Butler says there are real trade-offs with this kind of production. "It's more expensive to make them here. Because the wages in Australia — like America and most of the other developed countries — are a lot greater than Third World countries [like] China," Butler says. "[It] just makes it makes it very difficult to compete with overseas."

Putting The Cause Before The Company

Noffs' dilemma is not uncommon among social entrepreneurs. A business can do all the right things — go fair trade and organic, have a low carbon footprint and so on — and it drives up the product's price.

That leaves companies with a choice: Should the business compromise on its green principles in the name of affordability, to generate more profit to do more good?

Toms may be the best-known shoe company with a social purpose. When someone buys a pair of Toms shoes, the company gives a pair to a child in need. So far, Toms has donated more than 2 million pairs in 40 countries.

The California-based company has had to reconcile ends and means. A company spokesman says the factories it uses in Ethiopia, Argentina and China are not certified fair trade — and that's just the reality of the cutthroat global shoe business.

Gideon is the exception. All its sneakers are made in Australia, and it makes a $70 slip-on canvas shoe at a fair trade-accredited factory in Pakistan.

Noffs acknowledges that his idealism could drive his company into the gutter. But, he says, if the organization behind the shoe thrives, Gideon's fate doesn't matter.

"No matter what, Street Universities are growing, with or without Gideon," Noffs says. "If a company dies in the pursuit of doing something good, then so be it."

And the organization is growing. There are currently two Street Universities in Australia, and two more on the way.

But just two days later, Noffs sounds less like a purist and more like a businessman who's open to doing what it takes to keep his company alive.

"Gideon Shoes is a product of Street University, and it's something that is a work in progress," he says. The company is trying to find a way to "make the shoes more affordable, get more kids wearing them and get the story out there beyond Liverpool. And I think that's where we're at right now."

An observer might see a bit of a Bad News Bears quality in the people behind Gideon Shoes — or even wonder how the company got this far.

But Noffs and his colleagues are committed to showing the world that noncorporate nonconformists who love hip-hop and basketball can sell shoes. They just didn't realize it would be this hard.