Accessibility links
India's Census: Lots Of Cellphones, Too Few Toilets The results of India's once-in-a-decade census reveal a country of 1.2 billion people where millions have access to the latest technology, but millions more lack sanitation and drinking water. 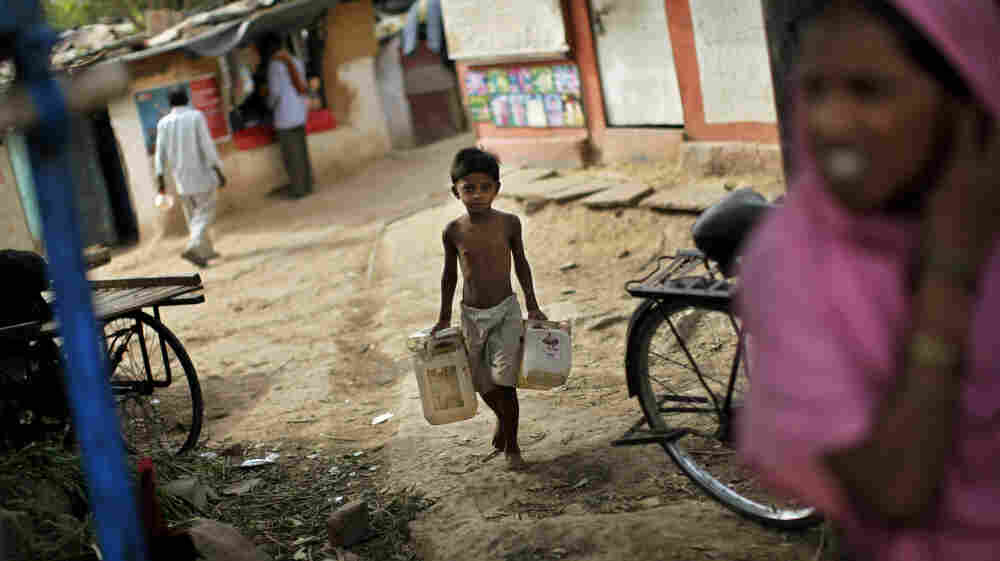 An Indian boy carries empty canisters to be filled at a water depot in a New Delhi slum. Data from India's latest census shows that although millions of Indians have access to technology such as TVs and cellphones, many millions more still lack basic amenities such as sanitation and water. Kevin Frayer/AP hide caption 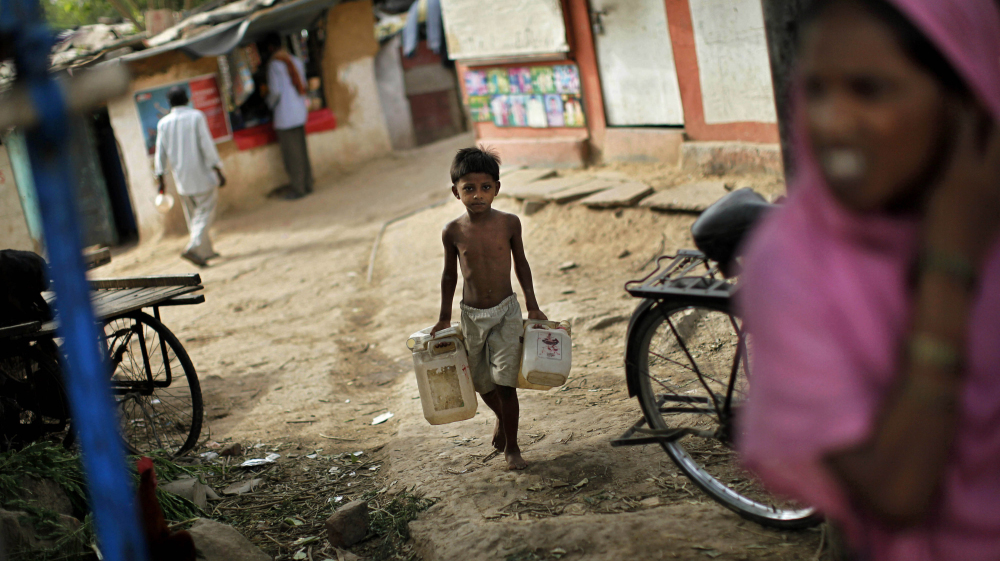 An Indian boy carries empty canisters to be filled at a water depot in a New Delhi slum. Data from India's latest census shows that although millions of Indians have access to technology such as TVs and cellphones, many millions more still lack basic amenities such as sanitation and water.

India's once-a-decade census has turned up some striking numbers: The population grew this past decade by 181 million — that's the total population of Brazil. India now has more than 1.2 billion people and is on track to overtake China as the world's most populous nation in 2030.

India's rapid economic growth — and its long-standing poverty — are also reflected in the census. More than half of all Indian households now have cellphones, but fewer than half have toilets.

The government began releasing the data last month, and it shows a country where the middle-class is expanding rapidly.

What Indians Have And Have Not

That is, no doubt, a promising sign, says Bhuvana Anand from the Center for Civil Society, an independent nongovernmental organization in New Delhi.

"Does growth really trickle down? I think this is the start of that," Anand says. "And access to basic products, or access to aspirational products, is usually the first signal of that kind of thing happening."

In a slum in the heart of New Delhi, the Indian capital, there are signs of this improvement in personal wealth, amid the public squalor.

House painter Pramod Kumar has lived there for almost all of his 26 years. He stoops to enter the small doorway into his family home.

Inside his tidy room, a TV is tuned in to an afternoon soap opera. In the corner, there's a tightly made bed. A DVD player sits next to the TV, and a refrigerator keeps bottles of drinking water cold.

It looks almost like a dorm room. But Kumar doesn't want to stay there.

"There is a problem here with sanitation and water. My father doesn't let anyone in the family come here anymore," he says. "My older brother has three kids, but my father doesn't let them come over because he doesn't want them to grow up in this kind of environment."

Outside, electrical wires dangle along the alleyways. Women wash clothes by hand on their doorsteps next to murky, open sewers. 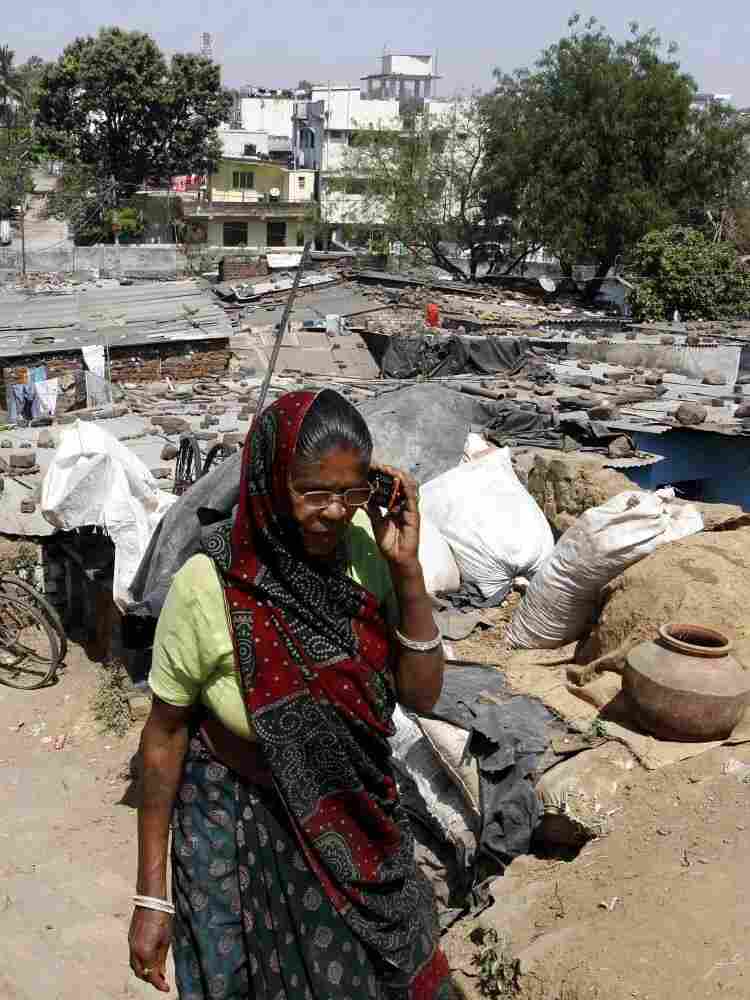 A woman talks on her cellphone in a slum area of Bhopal last month. Sanjeev Gupta/EPA /Landov hide caption 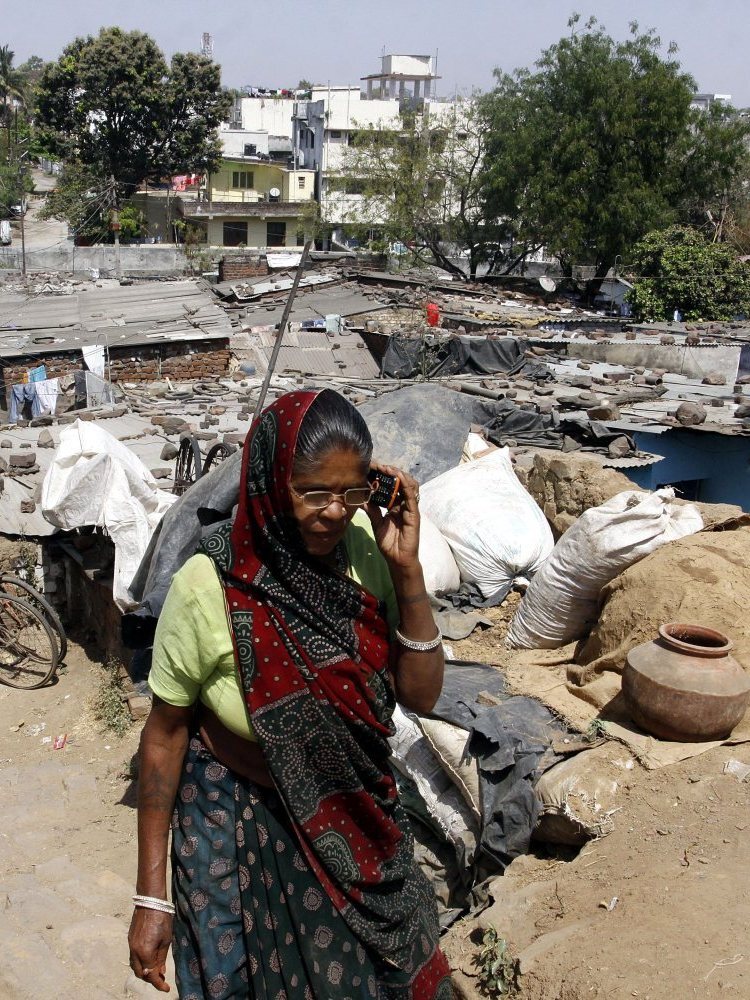 A woman talks on her cellphone in a slum area of Bhopal last month.

A single spigot spits out water for the thousands of residents. Just one block of toilets, donated by an NGO, serves the entire slum.

Even these conditions make Kumar better off than many. According to the census, 36.4 percent of the households surveyed had toilets at home. But, like Kumar, almost 60 percent have a mobile phone.

Government Failure To Keep Up

The fact that a mobile phone is easier to get than a toilet is a telling one, says Partha Mukhopadhyay, an economist at the Center for Policy Research, a think-tank in New Delhi. To him it shows that while individuals in India are striving, the Indian government hasn't been able to keep up.

"The government is trailing people a little bit in the sense that ... in order to provide public goods like sanitation, like water ... what you need is for the state to be organized, to be able to transform this increase in incomes into an increase in state revenues, which can then be used to provide these kinds of public goods," Mukhopadhyay says.

Numbers of those with access to sewage, sanitation and water have increased in India. But rural areas still lag far behind.

And across the country, Indians often are left to fend for themselves when it comes to public services, says Anand of the Center for Civil Society.

"Both the middle class and the poorer sections of the Indian population have made up for the absence of government," Anand says. "I think people are very optimistic about their ability to rise and shine, but not about their government's ability to support them."

Among some Indians, there is a belief that the government mostly gets in the way. The economy has stumbled recently, and a steady stream of corruption scandals has heightened the suspicion that India's leaders may be ill-equipped to catch up to the rest of the country.