Accessibility links
Three-Minute Fiction: Heavy She closed the book, placed it on the table, and finally, decided to walk through the door. She would leave it until tonight, after the zippered, footed pajamas had been wrestled on, after the toothbrush battle and the hair-brushing battle and the no-ice-cream-tonight battle had all been won. 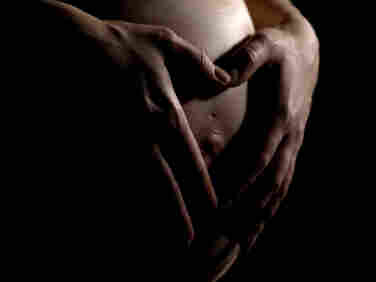 She closed the book, placed it on the table, and finally, decided to walk through the door. She would leave it until tonight, after the zippered, footed pajamas had been wrestled on, after the toothbrush battle and the hair-brushing battle and the no-ice-cream-tonight battle had all been won.

She would turn on the nightlight, heft her swollen body onto Sophia's twin bed, arrange the elephant named Rufus beside the pillow, and read the new book as a bedtime story. But for now, the sun was shining, and it was unseasonably warm, and Sophia was running through the sprinkler in the yard. The book would wait.

"Run with me, Mommy!" Sophia cried, tossing her wet ponytail and sending an arc of droplets twinkling behind her. She wanted to, she did. But she still felt so heavy, growing heavier every day.

"I'm resting, peanut," she said, leaning into the lawn chair, feeling the plastic slats dig into the backs of her legs, relishing their bite against her skin.

At 21 weeks, this baby was a mango, a papaya, an exotic fruit. It was large enough that the image on sonogram screen had shown strong arms and legs, spinal bones like beads on a necklace, a form that had lost all of the prehistoric, primordial-soupishness of the first trimester.

"We want to find out," she had said as the sonographer ran the wand over the warm gel on her stomach. "We were going back and forth about it, but then we decided, hey, why not?" The woman pushed the wand hard against the baby, too hard, she thought. "We have all the girl stuff, so it might be easier to have another girl, but a boy would be fun."

Silence; a furrowed brow from the woman with the wand. Silence, the wand digging into her soft belly, the sound of a nurse laughing in the hallway, the blue glow of the screen.

In the books you buy when you have a baby, you read chapters about the potential costs of amniocentesis, the upside of epidurals, the perils of vaccination. You turn to those books when you're not sure if you're allowed to eat that brie or your contractions are nine minutes apart or your baby is colicky and crying all night. Those books do not have a chapter on that sickening, sorrowful silence.

After the doctor's office, she had walked numbly to the bookstore down the street. She turned away from the "Parenting" section, with its pink and blue book spines, its cover photos of fat infants with angel wings. She scanned the children's area for books about loss. She had always found answers in books before; now, she needed one to help her tell Sophia that she wouldn't be a big sister, after all.

But that was for bedtime. For now, her beautiful, golden girl was running in the sun. "Watch me!" Sophia squealed, skidding in the wet grass, fast and bold and perfect and whole. And she did, resting her hand on her stomach, rubbing back and forth, almost as if she were waving goodbye.