Accessibility links
Betting Big On Santorum, Donor's Motives A Mystery While some of the mega-donors to the presidential superPACs have understandable self-interest or are frequent political givers, Louisiana businessman and oil industry executive William Doré is an enigmatic figure. He's given $1.5 million to the superPAC supporting Rick Santorum, but why?

There's plenty of speculation lately about Rick Santorum's plans and some Republicans now want their party to rally around front-runner Mitt Romney. A key event could come later this month when Santorum's home state of Pennsylvania holds its primary election.

Still, Santorum has enthusiastic backers, and among them is a Louisiana businessman named Bill Doré, who contributed $1.5 million to a superPAC supporting Santorum.

Doré made his millions in the oil and gas business. His company, Global Industries, built pipelines and infrastructure offshore. Last year, a French company bought the firm. Perhaps more interesting about Doré is where he started in life. 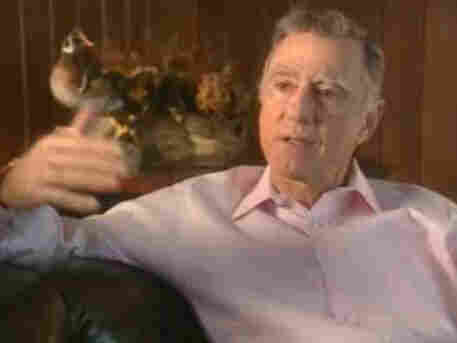 Doré was born in Western Louisiana of a Cajun father and a Lebanese mother. He declined an interview request, but in a scratchy-sounding video on the Horatio Alger Association website, Doré describes a rough childhood with an illiterate father who worked hard but also drank and was abusive.

"My father suffered from attention deficit hyperactive disorder, as I learned later in life when I was diagnosed," Doré says in the video. "And it was hard for me to understand why he would leave jobs; going from one to the next."

Read A Profile Of Bill Dore

Doré says he decided he wanted a better life, so he went to college and then built his business over the next four decades.

"My level of success and my ambition, as I went along, was very incremental," he says. "I wanted to be just a little bit better than I was at that any point in time."

Doré's appearance in the political world has not been at all incremental.

"If you were to make a list ... of a dozen, 50, maybe even 75 significant financial players, prior to 2012, I don't think Mr. Doré would have been on your list," says Joshua Stockley, a political science professor from the University of Louisiana at Monroe.

That changed in January, when Doré gave $1 million to the Red, White and Blue Fund, which is backing Santorum for president. On Valentine's Day, he gave another half-million to the superPAC. In March, the group ran an advertisement ahead of the Illinois primary to bring attention to what it calls the "real Mitt Romney."

The ad lists many of the issues conservative Republicans have with Romney, including a health insurance mandate created in Massachusetts when he was governor. The music turns brighter, of course, when talking about Santorum and his policies.

While the commercial is heavy on red meat for conservatives, Doré's history is less ideological. He's given money to both Republicans and Democrats.

In 2008, he gave the Democratic Senatorial Campaign Committee more than $28,000. That same year, he gave $4,000 to help elect one of the few openly gay members of Congress, Colorado Democrat Jared Polis.

"I would say it probably doesn't matter to him what other people in the political spectrum may think, because he's going to do what he wants to do and he's going to do it because he sincerely believes it's the right thing to do," Roach says.

Roach says Doré cares more about individual candidates than party affiliation, but beyond that, his contribution is a mystery. He's a man of faith, and that may have attracted him to Santorum, Roach says, but fiscal policies might be another reason.

"I think Bill, as a businessman, is concerned about typical issues, as relates to American business and our competitiveness," he says. "He's very focused on the energy business."

Doré became rich by taking big risks. Whether his $1.5-million investment in Santorum will pay off could become clear in the coming weeks.