Accessibility links
Lack Of Graduates Hampers Portugal's Recovery Just 28 percent of Portuguese over age 30 have graduated from high school, making Portugal not only Western Europe's poorest country but also its least educated. The EU bailed out Portugal last year, but the low level of graduates complicates efforts to build a modern economy. 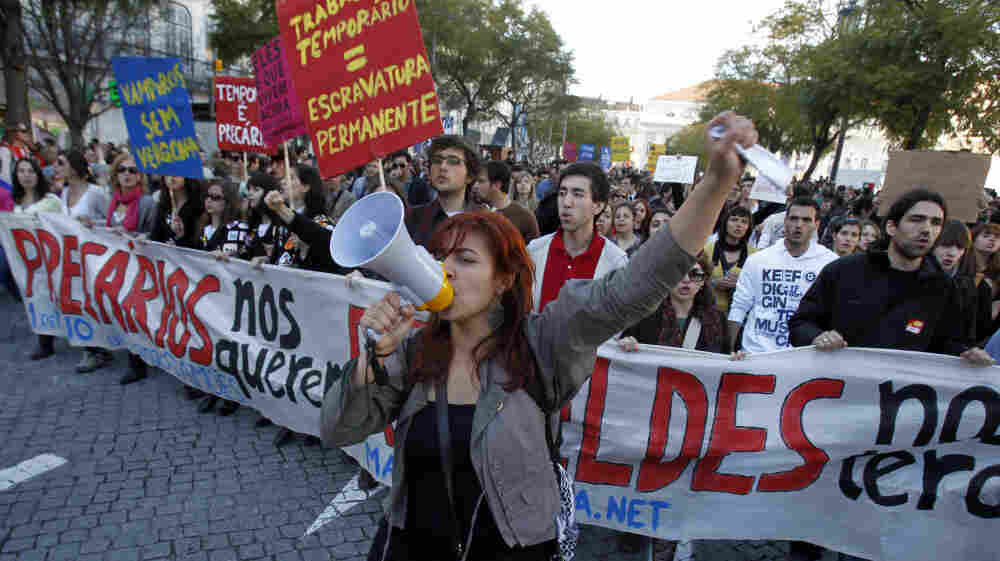 A group of young Portuguese protest at Lisbon's Rossio square last month to vent their frustration at grim career prospects amid an acute economic crisis that shows no signs of abating. Armando Franca/AP hide caption

As Portugal tries to dig out of its financial mess, it's confronted with a sobering fact: Fewer than 30 percent of adult Portuguese have graduated from high school. Not college. High school.

And in a country that's been hit so hard by the economic crisis, even those with an education are struggling.

Ana Dias and Ruth Cardozo, both 27, are lifelong friends who now work together at a shoe store in Lisbon, the Portuguese capital. Cardozo dropped out of high school 10 years ago to take this job.

She says she quit school because she wanted to make her own money, and not rely on her parents. "Get a boyfriend and a house, those things," Cardozo says, laughing.

Her friend, on the other hand, stayed in school and then went to college. Dias earned a nursing degree but can't find work in a hospital. So she finds herself in the exact same job as her dropout friend, selling shoes.

"I spent money for years [to] graduate, and what about now?" Dias asks. "I'm here and ready, but no one grabs me to work."

Her friend adds: "She likes selling shoes, but it's not her thing, you know? It's not what she wants."

The tale of these two friends illustrates a deep crisis in Western Europe's poorest and least educated nation, where only 28 percent of Portuguese over the age of 30 have graduated from high school, according to government figures.

That's compared with 85 percent in Germany, and about 90 percent in the United States if GEDs, or General Educational Development degrees, are included.

After an EU bailout last year, Portugal needs to strengthen its economy to pay off its debts. But the startlingly low high school graduation rate is creating serious challenges and is likely to complicate the country's economic recovery.

Portugal was a military dictatorship through the 1970s. Back then, kids were required to attend school for just three years. Luis Pais Antunes is a former lawmaker who grew up during that era.

He says parents forced their children to work on farms or in factories, and that the country is still paying the price of history.

"Whereas most of Europe, the transformation from an agrarian society to an industrial and then service society was fully completed in the 1960s and 1970s," he says. "In Portugal that transformation occurred between 1950 and the year 2000, more or less."

Since then, education requirements have increased in Portugal, and many more students graduate from high school these days. But now, amid Europe's debt crisis, there's a new problem: how to find jobs for those graduates. Lains says it's a simple question of supply and demand.

"The supply of education in the last 20 to 30 years has risen in a very rapid way. But the demand for education is another problem, and it depends on the strength of the economy — on economic growth, on structural change, on the dynamics of the economy," Lains says. "And with an economy that has been growing very slowly in the last 15 years and has been declining very sharply in the last two years, it's not a surprise that this mismatch occurs."

That mismatch is prompting graduates to go abroad for work, and some current students to drop out — which is allowed now at 16.

Even at universities, many students are dropping out, says Pedro Martims, a 22-year-old college student who works nights at a call center. His grades have suffered, and the idea of quitting school has crossed his mind, too.

"It's a big sacrifice," Martims says. "My father lost his job, and I have to help in my home also, so it's been quite difficult."

With a flood of cheap Asian imports, Portugal's textiles are no longer competitive. The country is hoping high-tech and areas such as wind energy can fuel the economy going forward. The challenge is to expand those industries by using both aging, less educated workers, and younger, sometimes overqualified ones.

Back at the shoe store where she works, Dias, who has a nursing degree, is asked if she regrets her decision to stay in school.

"No, I don't regret it, because that was my dream, and I'm still chasing it. I don't know where or when, but I will get my reward someday," Dias says. "At least I think like that."