Accessibility links
For-Profit Schools Under Fire For Targeting Veterans Veterans, with their post-Sept. 11 education benefits, have been an important driver in the growth of for-profit colleges and universities in recent years. Some lawmakers say for-profit schools are ripping off veterans, and the government, by luring students into programs that seldom lead to good jobs. 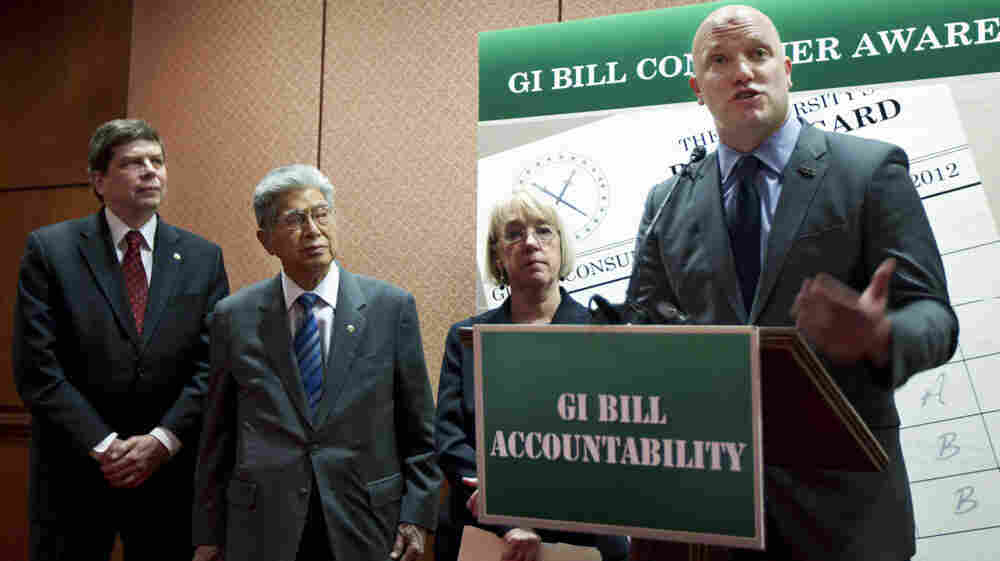 Hundreds of thousands of veterans have returned from Iraq and Afghanistan in recent years, eager to get an education under the new post-Sept. 11 GI Bill.

Many vets looking for a school find they are inundated by sales pitches from institutions hungry for their government benefits. Now, lawmakers are looking for ways to protect vets without narrowing their education choices.

Daniel Elkins, a legislative associate with the Veterans of Foreign Wars, recently did what a lot of vets do — he went to a site like gibill.com and answered a battery of questions about his educational goals and background. When prompted, he provided his email address and ZIP code.

The response, he says, was overwhelming.

The Role Of The 'Lead Generator'

That's because gibill.com is a commercial site run by a company called QuinStreet, a so-called "lead generator."

Lead generators like QuinStreet sell the information they collect primarily to for-profit colleges and universities. With their generous marketing budgets, for-profit schools can afford to pay for leads to guide them to vets considering enrolling in college.

Kentucky Attorney General Jack Conway is leading a multistate investigation of for-profit colleges. He's scrutinizing the sites targeting veterans, trying to ensure they are "engaged in the type of consumer interaction that does not violate our various consumer protection acts in our respective states."

In other words, he's trying to assess whether the companies are pretending to be government websites. Some of the sites have disclaimers, but others do not.

Either way, once the lead generators get their hooks into potential students, they don't let go easily.

Veterans have been an important driver in the aggressive growth of for-profit schools in recent years. The Department of Veterans Affairs has already paid out nearly $18 billion in post-Sept. 11 education benefits.

Holly Petraeus, head of the Office of Servicemember Affairs at the Consumer Financial Protection Bureau, says the size of this potential market has inspired for-profit schools to roll out the welcome mat.

Service members want portable courses, Petraeus says, so they won't have to drop out if they are deployed, sent for training exercises or assigned to a new base. "The for-profits were much more responsive and more nimble" in filling that need, she says.

Some members of Congress are worried that for-profit schools are ripping off the government by luring students into programs that seldom lead to good jobs. Lawmakers have even asked the U.S. Department of Veterans Affairs to trademark terms like "GI Bill" so commercial sites cannot use the words to gain veterans' trust.

"We found that the leads that we get from these third-party lead generators really are shoppers ... not serious students," he says.

Concern about the lead generators' sales tactics has prompted Congress to explore tighter limits on the public funds that can go to for-profit colleges.

But Sweizer says limiting government funding would just hurt the schools that are trying to deal honestly with vets.

Instead, he says, schools that don't deliver what they promise should be punished.

"I'll leave it up to the lawmakers to decide what those sanctions should be," Sweizer says. "But that's who they should go after ... [not] an entire industry or segment of schools."

Sweizer says he would like to see the VA become the ultimate college guidance counselor to vets.

The department does have tons of pointers on its website for veterans seeking higher education. But with a limited budget — and 435,000 currently enrolled students — the VA is-hard pressed to compete with lead generators and aggressive commercial pitches.