Accessibility links
What Do You Owe In Taxes? Depends Who's Counting If you're wondering if you're better off filing your income taxes through an online tax preparation service, a standard certified public accountant, or a more elaborate tax specialty firm, you may want to read an article called "Joel Stein Has Four Accountants." 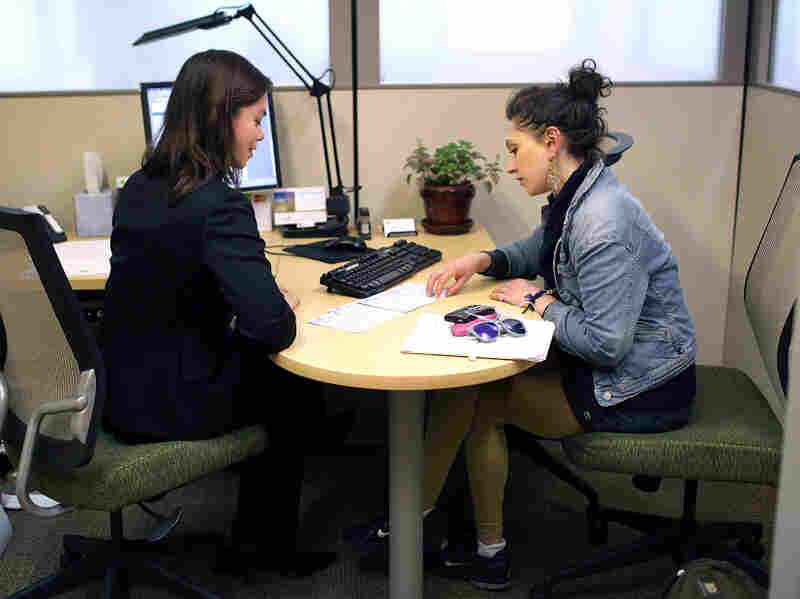 Which tax preparation service is best? That's what writer Joel Stein hoped to find out when he took his 2011 income data to different firms — including an H&R Block office, seen here in a file photo from last year's tax season. Justin Sullivan/Getty Images hide caption 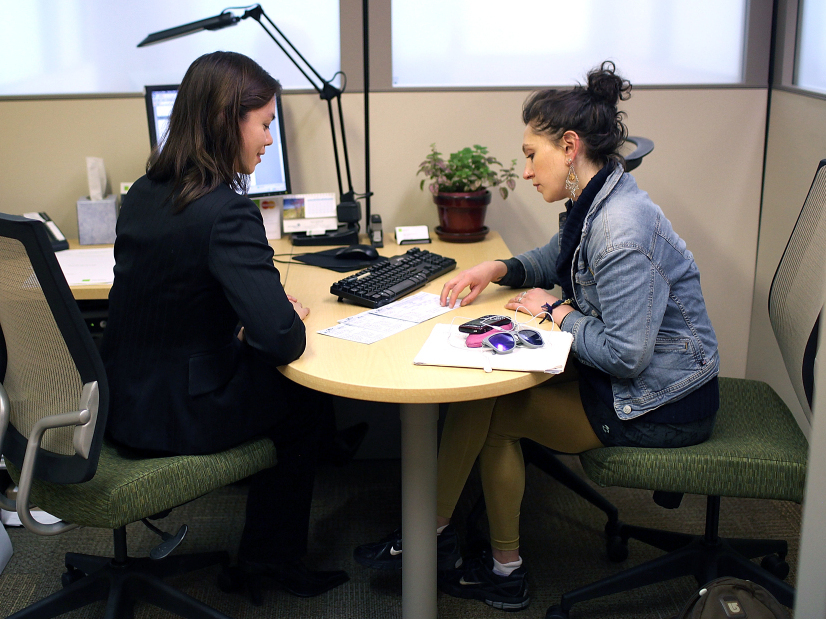 Which tax preparation service is best? That's what writer Joel Stein hoped to find out when he took his 2011 income data to different firms — including an H&R Block office, seen here in a file photo from last year's tax season.

In 2012, the federal tax return deadline is Tuesday, April 17 — so if you haven't already filed your income tax return, you have about one week left to shop around for different options to finish your taxes, or request an extension.

If you're wondering if you're better off filing your federal and state income tax returns through an online tax preparation service, a standard CPA (certified public accountant), or a more elaborate tax specialty firm, you may want to read an article over at Bloomberg Businessweek called "Joel Stein Has Four Accountants."

As he tells Morning Edition co-host Steve Inskeep, Stein plugged his financial results from 2011 into tax services that ranged from TaxSlayer.com to his father's Staten Island accountant.

One paragraph of Stein's article explains his motives:

"This year I really wanted to find out: What level accountant do I need? Can I do my returns myself using websites that promise to guide me through the process? Can H&R Block handle it? Is my current accountant great? Or would a high-end accountant know all the loopholes and get me so much money back that his fee would be worth it? Would any of them slip me the results of the Academy Awards?"

Stein's tax situation isn't as straightforward as some. The writer's income spiked to around $400,000 last year, he says, thanks to a book deal he signed. And because he often works from his house in Los Angeles, he also has the option of claiming a deduction for his home office — something he got conflicting advice about.

Here's the breakdown of services Stein tried out, and how much they cost:

Starting out at TaxSlayer — which, as a NASCAR sponsor, is "the preferred accounting method of Dale Earnhardt Jr.," Stein says — things went a little awry. Stein admits that he may have made some mistakes in entering his data.

And the results were shocking: The online service promised Stein a combined federal and state refund of $120,000, with about two-thirds of the money coming from the U.S. government.

Upon seeing those numbers, Stein tells Inskeep, his reaction was that "I have a Romney-like hedge fund that I apparently didn't know about."

So, he took the TaxSlayer documents along to his next stop: an H&R Block office in Los Angeles.

"When I showed the 80-page return to the H&R Block guy, he said that the IRS wouldn't bother calling me — they would just send a car straight to my house," Stein says.

That led Stein to return to TaxSlayer and correct his mistakes — the site eventually told him he would get nearly $17,000 from the federal government, but that he would owe California around $22,000.

Another accounting company he tried was RBZ, a venerable firm with plush offices overlooking Los Angeles.

"I kind of thought high-end accountants found all kinds of loopholes that only they knew about," Stein says. "That's not quite how it works."

Instead, the firm's adviser tried to help Stein position his finances so he could help his family, with plans for his son's education and possible care for his parents. The RBZ method would leave him with no refund, and owing around $4,544 for combined state and federal taxes.

Stein also gave his tax return info to an old family favorite, Howie Halbreich — a man he has never met but who has handled his taxes for more than 20 years, since Stein left college.

Halbreich, who also does Stein's father's taxes, already had all of his information on hand. He told Stein that he stood to receive a federal refund of $1,488 and owed California $1,019 — for a net gain of $469.

"That means I stick with Howie," Stein says.

Asked what it means for other taxpayers, he says, "They should go to Howie."

In his article, Stein wrote that Halbreich "makes the process painless, which — more than a fat return or even a long-term plan of how to beat the government — is what I'm really looking for."

In addition to the ones Stein tried out, other popular choices include TurboTax — which Treasury Secretary Timothy Geithner used when he neglected to report all of his income in his 2001 tax return.

And, if your income was under $57,000 in 2011, you can also use the IRS website to file your return free of charge. If you need help finding professional assistance, the IRS site also has a search tool.