Accessibility links
The Key To Keeping Lice At Bay? A Lot Of Hot Air When kids are infested with head lice, a certain amount of panic — even desperation — can spread through a household. Parasite expert Dale Clayton knows that nightmare all too well, but now he also has a solution — using hot air to dry lice out and kill them and their eggs. 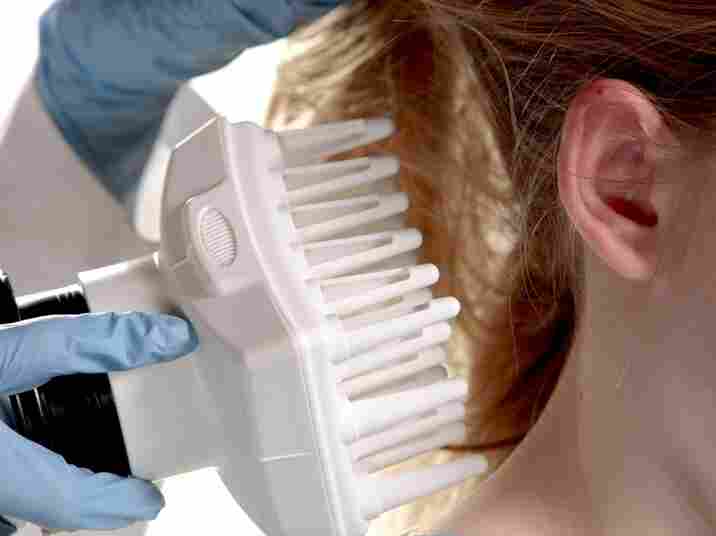 The LouseBuster uses heated air to dry lice out and kill them, along with their eggs. Courtesy of LouseBuster hide caption 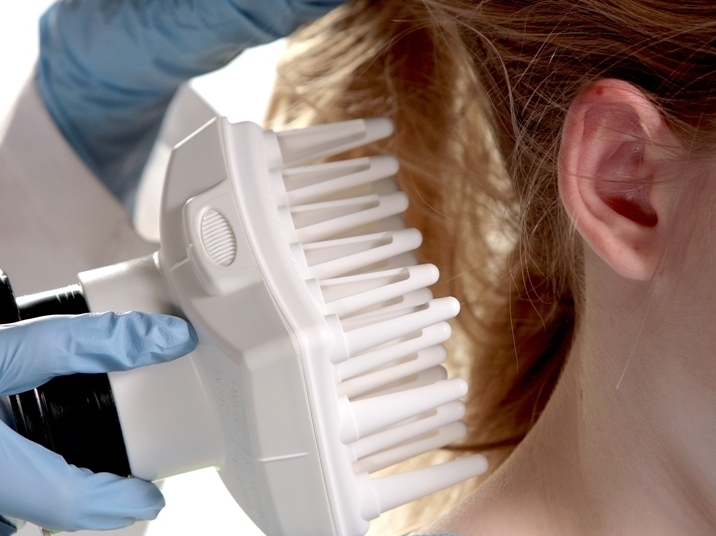 The LouseBuster uses heated air to dry lice out and kill them, along with their eggs.

When your kids are infested with head lice, a certain amount of panic — even desperation — can spread through the house. But one biologist has made it his mission to find a better way to rid his home of a common household pest.

The bugs are basically harmless, but teacher Sheri Nacht knows all too well the knot that can form in the pit of a parent's stomach at the sight of a louse. Nacht teaches kindergarten in Santa Cruz, Calif. Last winter, she discovered that she had lice, which she hadn't had since she was a child. As Nacht puts it, "It was a total nightmare."

"I had the nurse come down and check my whole class," she says. "We found out that there was another little girl who had lice, so they went ahead and sent the letter, and it's just a letter saying somebody in the school has lice and make sure to check your hair."

The letter didn't name names, but Nacht was still mortified.

"I combed and combed and shampooed and combed for three weeks, and had a friend combing my hair every other night," she says. "It was very difficult to get rid of, and I wasn't sure that I was done with it."

Turns out, she wasn't.

Even researchers who study lice for a living — Ph.D.s in entomology — can become helpless when faced with a live, fertile louse loose on the scalp of their child.

"My wife and I couldn't get rid of the head lice," says Dale Clayton, a co-evolution and parasite expert at the University of Utah who's been researching lice for decades. "Here I am supposed to be an expert on lice — and there are not many of us in the world, by the way — completely clueless about how to get rid of human head lice."

When Clayton's kids were little, they — like millions of others — got lice, and Clayton spent weeks combing and picking and shampooing to get them out.

"Even then it was already pretty well known that lice were evolving resistance to many of the shampoos that are available in drugstores and grocery stores and so on," says Clayton, so he made it his mission to build a better louse trap.

"The first attempt was to take pigeon lice — and I am not making this up — and put them in my hair and then put on my mother's bonnet hair dryer and see if it had any effect on them — if it killed them," he says.

It didn't. But one thing you should know about Clayton is that he's not crazy — he just knows a lot about lice. For example, he knew that pigeon lice could never survive and breed on a human head.

So when Clayton moved his lab from Oxford, England, to Utah and his lice started dying off, that got him thinking.

"It's quite arid here," he says. "We couldn't keep lice alive on our birds, and we couldn't figure out why for a few months."

Then it came to him: Sudden changes in climate can kill lice, and lice get most of their moisture from the air. If you suck all the moisture out of a louse, you can dry it out, desiccate it, kill it.

A bunch of dead lice may have been bad for Clayton's research, but as a parent who was sick of nit-picking, he saw an opportunity: He imagined building a machine that could kill these annoying little bugs by the thousands.

See The LouseBuster In Action

"We tried a bunch of different approaches to drying out lice," he says. He tried hair dryers, bonnets from beauty parlors and handhelds; he tried those wall-mounted hand blowers you see in bathrooms; he even tried a leaf blower.

"At one point, we infested my kids with head lice — male lice only so they couldn't breed — and treated them in the lab," Clayton says. "They're in college now, but they like to tell that story to shock their friends."

Eventually, he and a team of engineers built the LouseBuster. It looks like an old canister vacuum cleaner, but instead of sucking air in, it blows hot air out. On the end of it there's an attachment that looks a bit like an overgrown plastic porcupine with 28 little nozzles that direct air along the top of the scalp.

Getting treated with a LouseBuster takes about half an hour, and it feels a bit like a heated head massage. It kills lice and their eggs, the nits. Sheri Nacht says it also may have saved her sanity.

"It's magic. It's amazing because nothing else kills the eggs," she says. "If you can't kill the eggs and you don't find every last one of them, then you're starting all over again."

Today, Clayton's company sells the LouseBuster to nurses, schools and hospitals, and it leases it to salons with names like Nitless Noggins and Hair Whisperers. Clayton doubts his invention will ever make him rich, but he says it has at least allowed him to scratch his entrepreneurial itch.

The audio of this story, as did a previous Web version, misidentifies one of the salons that lease the LouseBuster. It is Hair Whisperers, not Hair Fairies.