Accessibility links
A Church Divided: Ruling Ends Virginia's Episcopal Battle It's like the end of a marriage. Earlier this year, a Virginia judge ruled that seven conservative congregations that had split with the Episcopal Church must hand over almost everything they own, including their places of worship. "It's a tremendous loss," says one conservative parishioner. 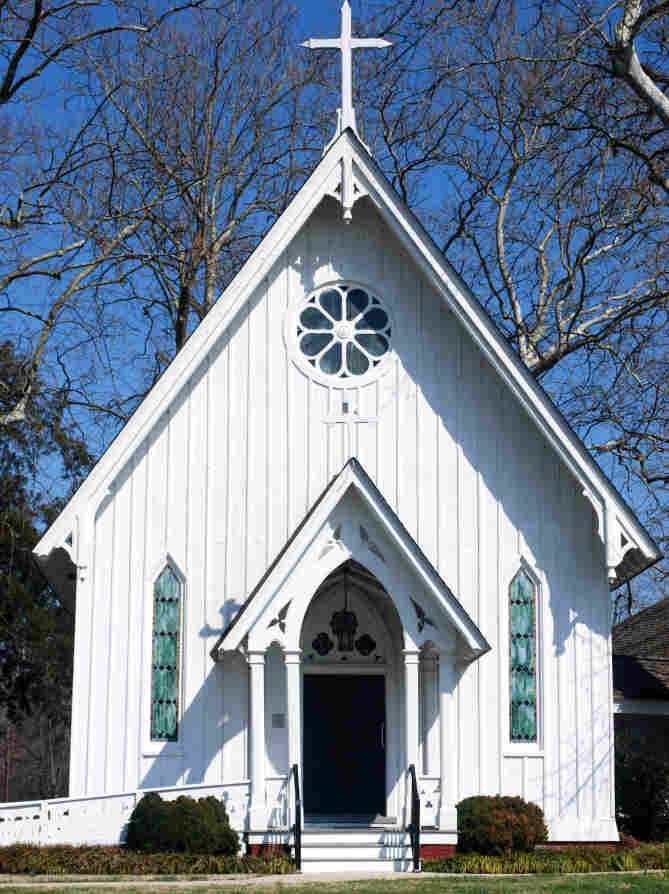 Tale Of Two Churches: The St. Stephen's Church in Heathsville, Va., has been at the center of an ugly custody battle between the St. Stephen's Episcopal Church and the newly affiliated St. Stephen's Anglican Church. Barbara Bradley Hagerty for NPR hide caption 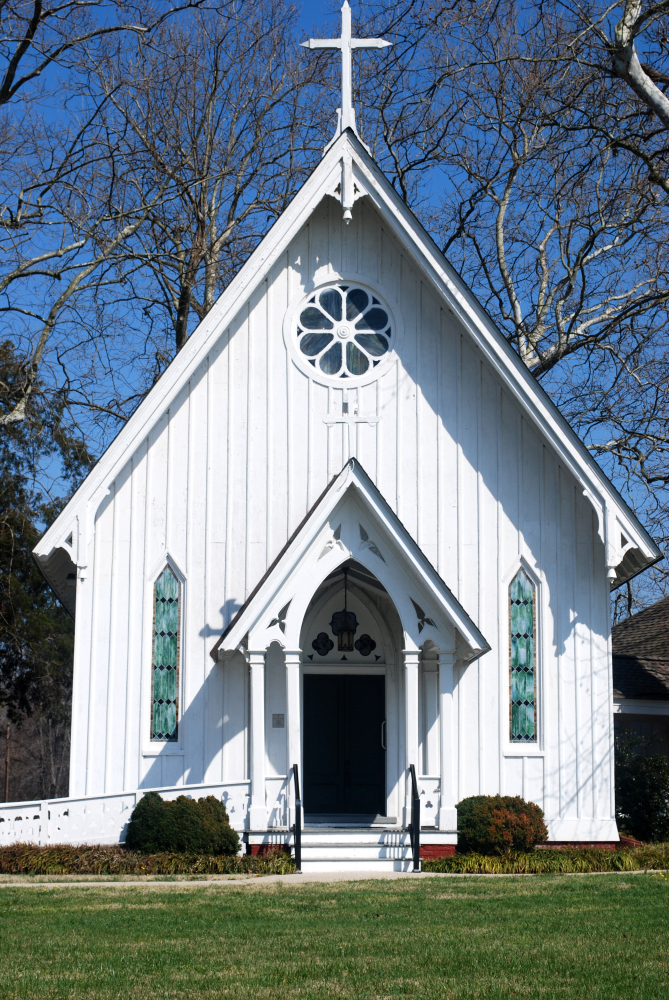 On a bright Sunday morning in the tiny town of Heathsville, Va., Jeffrey Cerar surveys the church he's preached in for the past 15 years — its 130-year-old wooden pews, its stained glass windows, its paschal candles, its cross.

"Virtually everything you see here is going to stay; the high altar, the credence table, the hymnals and books of common prayer will all stay," he says. "The Bibles will go with us."

Cerar, rector of St. Stephen's Anglican Church, is leaving, along with his congregation. They're handing the keys over to their theological rivals, the St. Stephen's Episcopal Church. Earlier this year, a judge ruled that seven conservative Virginia congregations that had split with the Episcopal Church must hand over almost everything they own. It's like the end of a marriage, with people moving out and splitting up assets — even its own long, ugly battle.

When Cerar leaves the Heathsville chapel, he'll be taking some happy memories with him.

"It's a beautiful place," he says. "And when it's full and people are singing — and they do in our congregation — they just raise the roof."

Jan Beckett, a conservative parishioner, says the liberals and conservatives tried to stay together, but at some point the rift became too wide.

"We had two churches in one building," she says, "and we were beginning to experience that tension. Not that it was something you talked about; you just knew it was there."

Lucia Lloyd, rector of St. Stephen's Episcopal Church, says in some ways it was like a divorce: "We never wanted this split to happen and would have done anything to prevent it from happening."

After the vote, Lloyd says about three dozen of the more liberal parishioners left. Meade Kilduff, 93, was one of them. She describes the split as traumatic.

"My head was going around and around, and I thought, 'Well this is a good time for me to get a stroke,' " Kilduff says. "I got home and just got on the bed and just cried and cried and cried." 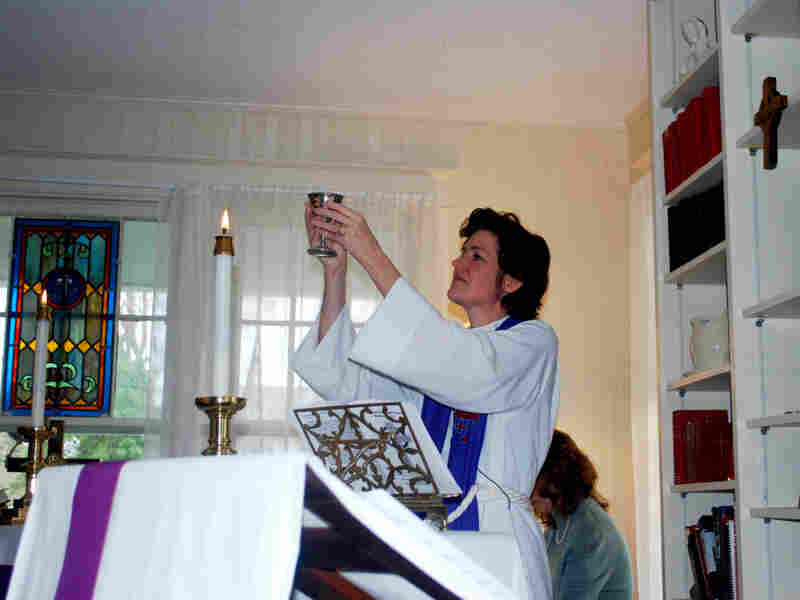 The Rev. Lucia Lloyd leads a service in the rental that housed the St. Stephen's Episcopal Church after the congregation split in 2006. Barbara Bradley Hagerty for NPR hide caption 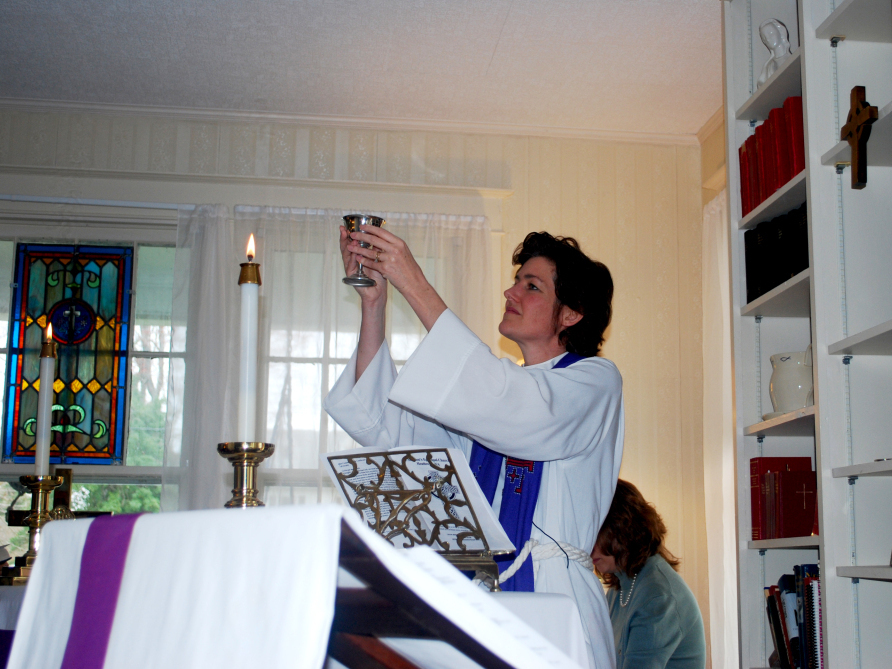 The Rev. Lucia Lloyd leads a service in the rental that housed the St. Stephen's Episcopal Church after the congregation split in 2006.

The liberal parishioners restarted St. Stephen's Episcopal Church down the street and sued to get their old church back. Lloyd shows off the rented house that has served as their makeshift church for the past few years. A dresser serves as the altar; a pillowcase, as the altar cover. A keyboard replaces the organ.

In January, after a bitter, five-year legal battle, a judge ruled that the Episcopal Church owns St. Stephen's and the Episcopal congregation can finally go home.

Parishioner Ellen Kirby says the legal judgment is a victory and a tragedy.

"I have mixed emotions, more sadness than happiness," Kirby says. "We're a small community; we see each other all the time, at the post office or the grocery store; and we know the hurt and what it feels like to be out of a church and a space that you love."

'A New Sheriff' At The Episcopal Church

Virginia is the epicenter of the Episcopal schism. Heathsville is one of seven churches — including two of the largest and most historic in the country — that broke away from the denomination in 2006. Now that they've lost their lawsuit, they all have to find new homes.

Church of the Apostles is one of the seven breakaway churches. At its home in Fairfax, a half-dozen men wrestle with a 360-pound cross, panting as they remove it from its moorings in the sanctuary. Parishioner Wayne Marsh says the cross is going into storage and the church is being shuttered. 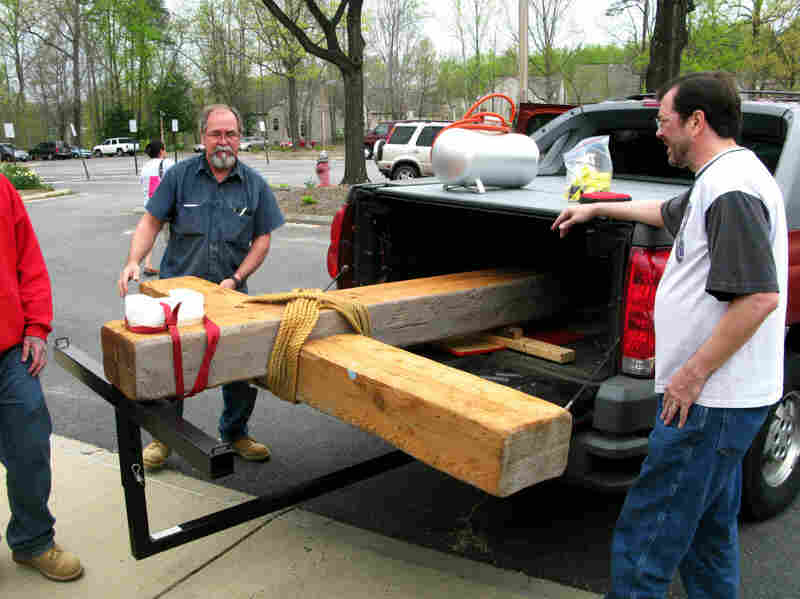 Wayne Marsh (right) and Loren Nystrom (left) help put the Church of the Apostles' cross into storage. The church will be shuttered and, eventually, sold by the Episcopal Diocese. Sam Sanders for NPR hide caption 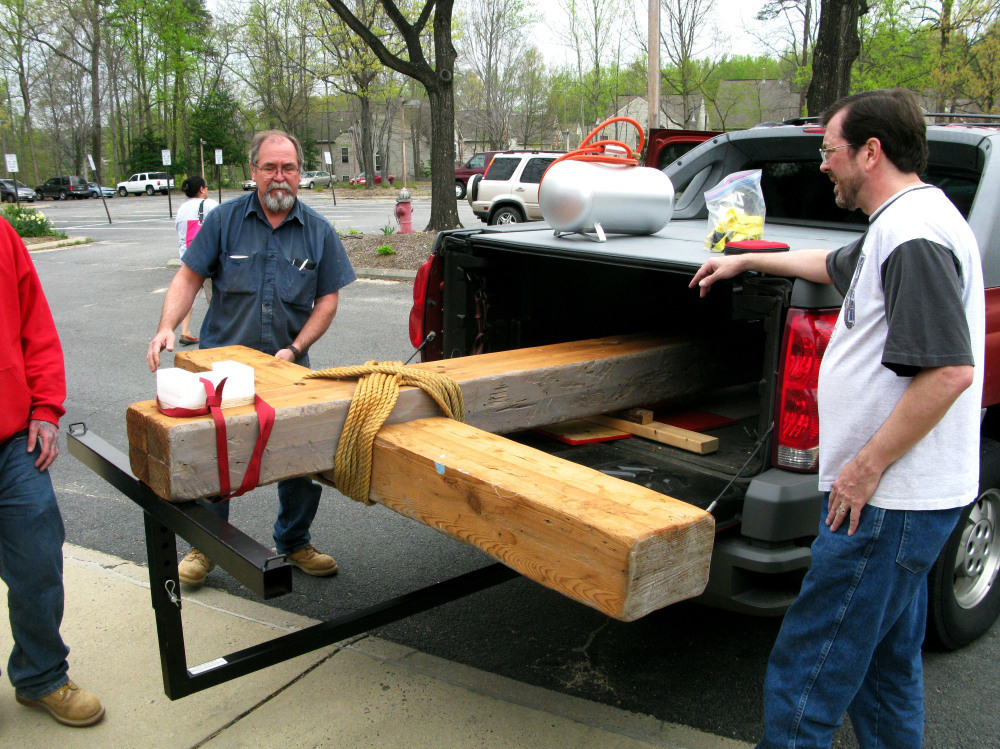 Wayne Marsh (right) and Loren Nystrom (left) help put the Church of the Apostles' cross into storage. The church will be shuttered and, eventually, sold by the Episcopal Diocese.

"It's sad and heartbreaking, and it's a tremendous loss," he says, "but God has just given me a peace to understand this is his will and we're going forward with it, not knowing exactly where we're going."

But underneath those gentle words is an acrimonious history. According to David Harper, rector of Church of the Apostles, "The Episcopal Church has developed a scorched-earth policy."

Harper says that in late 2006, when the seven churches decided to leave, they worked closely with the Episcopal Diocese of Virginia to do what had been done in other states — figure out a way to stay out of court and pay the diocese to stay in their church. But one day, Harper says, the negotiations fell apart. The Episcopal bishop told him, "There's a new sheriff in town."

That newcomer was Katharine Jefferts Schori, though she says she wouldn't exactly call herself a "sheriff." Jefferts Schori had just become presiding bishop of the national Episcopal Church in late 2006 when she told the Diocese of Virginia to stop negotiating.

"The reality is that the intensity of the conflict escalated after I was elected, and it was clear that several bishops were attempting to lead dioceses out of the church and it was time for a churchwide policy," Jefferts Schori says.

Within weeks, the Diocese of Virginia and the national Episcopal Church sued the Anglican churches. Initially, the judge in the case ruled in favor of the breakaway congregations, but after being reversed on appeal he awarded almost everything to the Episcopal Diocese.

'God Is On Everyone's Side'

"When I got the news, I felt as though the stuffing had been knocked out of me," says Harper.

Now, he says, his church owes the diocese about $1 million that was in its bank account in 2007. It has to hand over the land it bought to build a new sanctuary in the future and it's also relinquishing the building itself, which he estimates is worth more than $5 million. But unlike the situation in Heathsville, Harper says there is no congregation to take its place.

"I don't know what the diocese will do with the property, but we do not have a shadow congregation," he says. "There's no group from Church of the Apostles that want to come back and gratefully re-enter the building."

That means the building will most likely be sold, with the money going to the diocese. In recent years, breakaway church properties have been sold to Baptists, Presbyterians, Jews; one church in New York was sold to an Islamic awareness center. According to Jefferts Schori, the only people who can't buy the buildings are the Anglicans.

"I've had two principles throughout this," Jefferts Schori says. "One, that the church receive a reasonable approximation of fair market value for assets that are disposed of; and, second, that we not be in the business of setting up competitors that want to either destroy or replace the Episcopal Church."

Henry Burt, chief of staff of the Diocese of Virginia, concedes that this internecine war isn't the best example of Christian love.

"I don't know that 'unseemly' is a word I would use, but it is regrettable," he says. "It's also regrettably necessary. The diocese has had very little choice, frankly, as we've moved along this path."

Asked if he thinks the Episcopal Church's victory is evidence of divine favor, Burt pauses.

"I think God is on everyone's side on this," he says, "but he may be a bit disappointed."