At a press conference in Tulsa, Okla., following the targeted shootings of five African-Americans last week, the optics were as important as the substance of the news.

The mayor and police chief pleaded for the public's help in capturing the suspects, while behind those two white men stood a pair of Tulsa's most influential black leaders — the lone African-American member of the City Council and the president of the local NAACP.

The united front, seen live by a national television audience, came in response to racial hostilities that whipped up overnight after the shootings, which left three people dead and two injured. Some African-Americans promised vengeance. 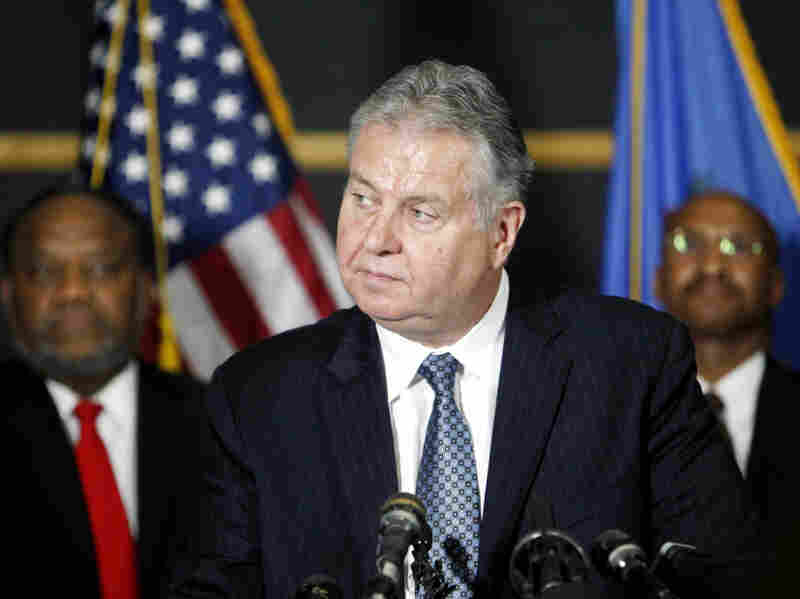 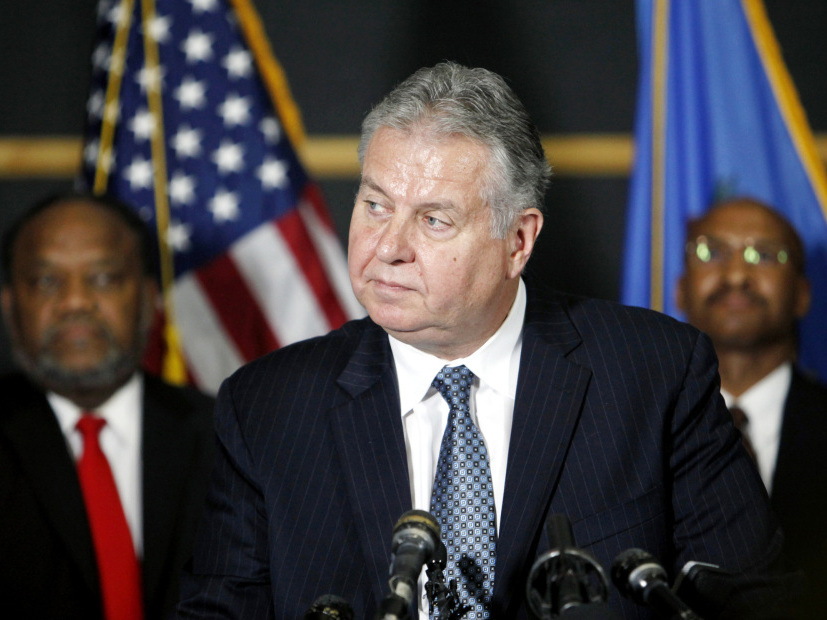 "The African-American leadership of this city was saying, 'Give the police a chance. We have confidence that they are going to solve this issue and, you (blacks), be quiet, settle down,' " says the Rev. Warren Blakney, president of the Tulsa branch of the National Association for the Advancement of Colored People. "I was trying to send a clear message."

In Tulsa, with its tortured racial history, old wounds can reopen easily.

The race riot of 1921, arguably the worst in U.S. history, occurred in Tulsa and destroyed one of the South's most prosperous black neighborhoods, later known as Black Wall Street. Tulsans, black and white, refused to speak of that bloody chapter for decades, keeping it out of history books and personal family histories. The worst of the violence occurred not far from the shootings in north Tulsa last week.

Two suspects were arrested on Sunday. Jake England, 19, who has been identified as Native American, and Alvin Watts, 32, who is white, have confessed to driving into predominantly black north Tulsa neighborhoods and gunning down the five victims, according to Tulsa police.

Some have speculated that England was seeking vengeance because his father was killed by a black man in 2010. Before the shootings, England referenced the two-year anniversary of his father's death on his Facebook page, where he used a racial epithet to describe his father's killer.

Tulsa prosecutors said Monday that Pernell Jefferson shot England's father in self-defense during a fight. Prosecutors didn't charge Jefferson for the shooting but did charge him with attempted burglary and felony possession of a firearm.

While investigators determine whether last week's shootings were racially motivated, which could lead to hate crime charges, the crucible of race in Tulsa has resurfaced.

Residents say much has changed since 1921, the subsequent years of Jim Crow laws and the integration of public schools. Many blacks and whites say they have built working relationships with each over the years that have helped ease tensions and foster greater cooperation between disparate communities.

Some say race relations in Tulsa now aren't any worse than in any other city of similar size and makeup. (Tulsa's population of more than 391,000 is 58 percent non-Hispanic white, 16 percent black, 5 percent Native American, and 14 percent Hispanic of any race.)

If you look at the progress we've made in race relations, we've come a long way. But we're not where we need to be.

"If you look at the progress we've made in race relations, we've come a long way," says Eddie Evans, a former local NAACP president. "But we're not where we need to be. If anybody tells you we are, they are lying to you."

"Whenever there's a problem, we will address it head-on," says Evans, who is also a co-founder of the youth mentoring group 100 Black Men of Tulsa. "But it's not something we've got to fight every day."

Others insist the vestiges of the past remain front and center, including racially self-segregated neighborhoods that few whites and blacks care to challenge, as well as yawning mistrust between police and blacks. A recent police scandal, regarded as the worst in Tulsa history and resulting in the convictions of several officers, has deepened the enmity.

Separating north and south Tulsa is Admiral Boulevard. Blacks have been permitted to live south of Admiral since the 1960s and a number of them now do, but the majority remain heavily concentrated in the north, where few whites still tread.

"Admiral continues today to be a psychological barrier. A number of my white friends who want to do [volunteer work] really don't want to go across Admiral Boulevard except to go to the airport or the zoo. They are uncomfortable up there," says Herb Beatty, who is white and lives in the mostly white Midtown neighborhood.

Beatty, who moved from upstate New York in 1974, has spent the past two decades volunteering at north Tulsa schools and advocating alongside the NAACP on a range of issues. 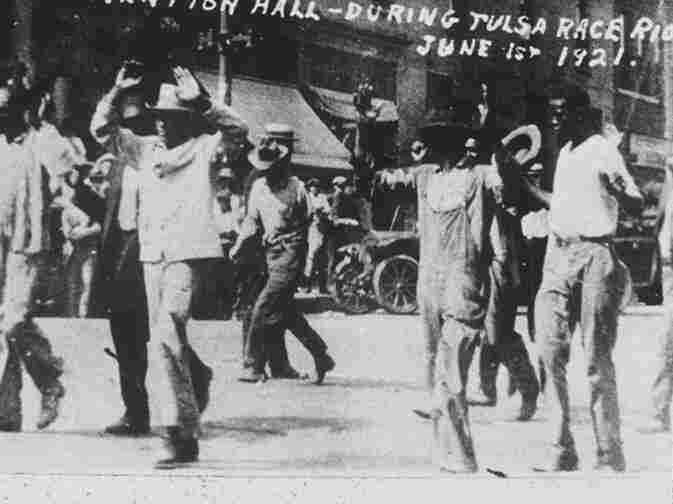 Black detainees are led to the Convention Hall following a race riot in Tulsa, Okla, June 1, 1921. The National Guard rounded up blacks by the thousands and took them to the fairgrounds, the Convention Hall and a baseball stadium where they were given food and water. By day's end, many thriving black businesses in a 35-block area had been torched. Tulsa Historical Society/AP hide caption 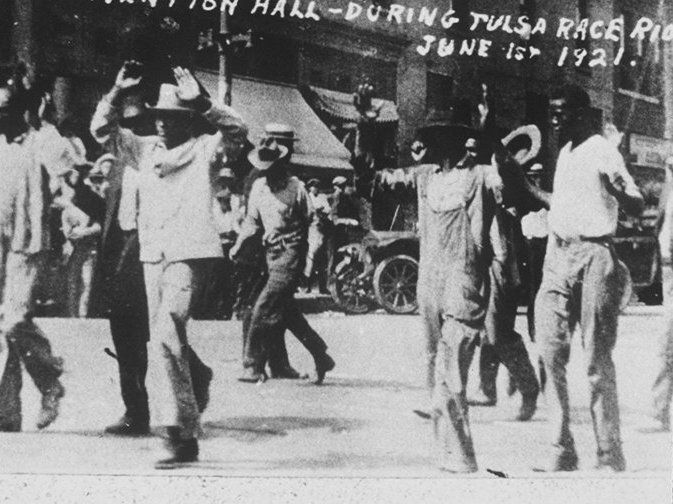 Black detainees are led to the Convention Hall following a race riot in Tulsa, Okla, June 1, 1921. The National Guard rounded up blacks by the thousands and took them to the fairgrounds, the Convention Hall and a baseball stadium where they were given food and water. By day's end, many thriving black businesses in a 35-block area had been torched.

Beatty, Evans and most every other civic activist of any stripe in Tulsa say the most significant advancement for blacks in recent memory was a ballot referendum that changed the city's form of government in the early 1990s. But it took the threat of a lawsuit by the NAACP.

Blacks complained that the old system violated the Voting Rights Act because it required each City Council member to run for election citywide, preventing north Tulsa from electing its own representatives. Voters approved a proposal to replace the at-large seats with nine council districts. The first district, which encompasses north Tulsa, has been represented by an African-American since then.

"I don't want to paint a broad brush and say the majority of people have racist tendencies, but it's clear there's an apathy or lack of concern about north Tulsa," says Joe Williams, who held the District 1 council seat for 10 years.

Williams, another former local NAACP president who joined community leaders calling for calm, says it's still common for real estate agents to steer newcomers away from homes in north Tulsa. And the neighborhood's stereotypes are reinforced in news coverage.

"If it's a crime that takes place in this community, particularly if it's violent, they will immediately mention that it took place in north Tulsa," Williams says. "And whether they have any evidence or not, they will say it may be gang-related. They don't report crimes in other neighborhoods the same way."

But some point to the upcoming relocation of a prominent church as another sign of Tulsa's progress. All Souls Unitarian, which has a predominantly white congregation, decided to relocate downtown from Midtown to accommodate its black members who have expressed concern about entering a mostly white neighborhood to worship.

At Easter service at All Souls, the Rev. Marvin Lavanhar, who is white, scrapped his prepared sermon and instead addressed the shootings, only hours after the two suspects had been arrested.

"It was a scary time when Jesus was killed. The disciples didn't know if they'd be next, kind of like some people waking around Tulsa, Okla., the last couple of days," Lavanhar said, receiving 'Amens' from the audience. "The disciples lived in fear, looking over their shoulders, scared to walk outside. Sound familiar?"