Accessibility links
To Some Hindus, Modern Yoga Has Lost Its Way Millions of Americans practice some form of yoga. But some Hindus say yoga in the U.S. has strayed too far from its spiritual roots. One Hindu group has even launched a "Take Back Yoga" campaign. 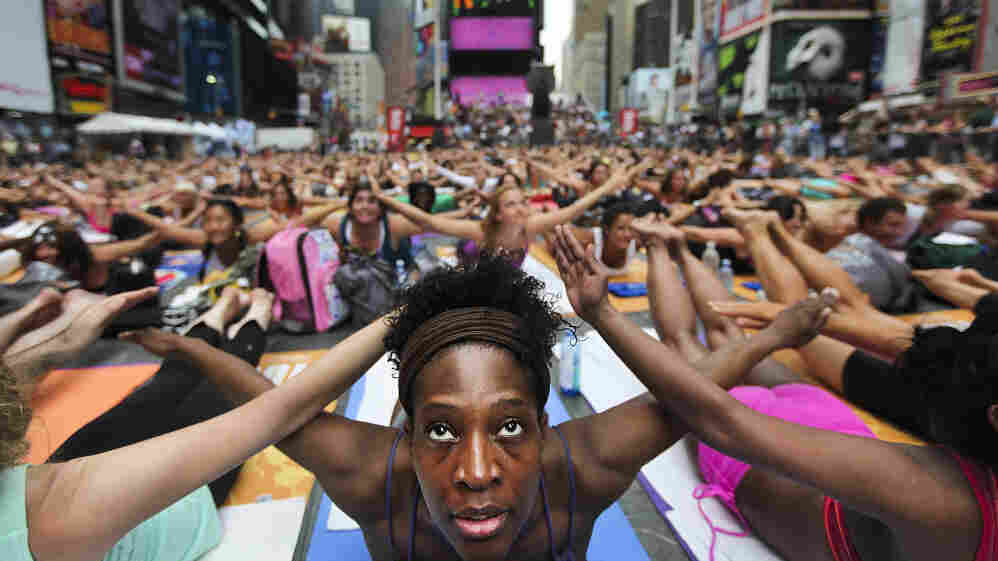 About 20 million people in the United States practice some form of yoga, from the formal Iyengar and Ashtanga schools to the more irreverent "Yoga Butt."

But some Hindus say yoga is about far more than exercise and breathing techniques. They want recognition that it comes from a deeper philosophy — one, in their view, with Hindu roots.

Many forms of yoga go back centuries. Even in the U.S., the transcendentalists were doing yoga in the 1800s.

William Broad, a reporter for The New York Times and author of The Science of Yoga, has been practicing since 1970. He says people pursue yoga for all kinds of reasons, from achieving health and fitness to seeking spirituality, energy and creativity.

Yoga, Broad says, is an antidote for a chaotic world.

"You see a wild correlation between yoga studios and the most stressful places on the planet," like lower Manhattan or road-rage prone Los Angeles, Broad says.

That's because, he says, "yoga works — to unplug, to relax, to help tense urbanites deal with that tension," he says.

But some Hindus are taken aback by how so much of the yoga practiced in the United States emphasizes only the physical.

The holistic practice of yoga goes beyond just a couple of asanas on a mat.

One group, the Hindu American Foundation, has launched a "Take Back Yoga" campaign to address what they see as a fundamental disconnect between yoga and Hinduism.

Sheetal Shah, senior director at the foundation, says the group started the campaign when it noticed that while "Vedic," "tantric" and many other words appeared regularly in yoga magazines, the word "Hindu" was never mentioned.

So, the foundation called up one of the country's most popular magazines to ask why.

Shah says she understands why some people have a problem with linking yoga and Hinduism. Many American practitioners associate the practice with something pure and serene, she says. But when they think of Hinduism, she says, they think of "multiple gods, with multiple heads and multiple arms. Colorful [and] ritualistic."

It may be difficult for people to see how these things fit together, Shah says.

With the Take Back Yoga campaign, the Hindu American Foundation is hoping for broader acknowledgment that yoga has Hindu philosophical roots — while also emphasizing that it is universal and appropriate for everyone.

"What we're trying to say is that the holistic practice of yoga goes beyond just a couple of asanas [postures] on a mat. It is a lifestyle, and it's a philosophy," Shah says.

"How do you lead your life in terms of truthfulness? And nonviolence? And purity? The lifestyle aspect of yoga," Shah says, "has been lost."

Staying 'Accessible To All'

There's a huge scholarly debate about yoga's origins, but experts agree the practice dates back to a time before the term "Hindu" was even used to describe a spiritual tradition based on the Vedas, sacred texts that form the underpinnings of Hinduism — although Shah would argue that "Vedic" and "Hindu" are one and the same.

Learning To Embrace Mess And Chaos Through Yoga

But author William Broad says Yoga was reinvented — and somewhat sanitized — in the 1920s and '30s. Some of the tantric and sexual aspects were removed, he says, and more health and exercise put in.

"There is no 'yoga,' " says Broad. "There are hundreds and thousands of things that are labeled yoga." Like laughter yoga, which Broad remembers practicing in Mumbai. He had a great time, he says, "but in truth, there is nothing yogic about laughter yoga."

Alison West has been teaching yoga since the 1980s. She says it's important that yoga be accessible to Jews, Christians, atheists and others who feel no affinity with Hindu spiritual traditions. All people, she says, should feel free to use yoga for personal satisfaction or emotional and mental awakening.

"The genius of yoga," she says, is that it's "accessible to all. It's very important to not overstress the Hindu origins of yoga. And at the same time, nobody should dismiss the vast importance that Hinduism has played in the evolution of yoga over the centuries," West says.

But Genny Kapuler, who teaches Iyengar yoga, says her understanding of yoga is indeed Hindu in origin. In her practice, she says, "every thought, every action has a ramification ... there is this moral responsibility to own what you do."

Indeed, many practitioners would argue their practice goes far beyond a few poses and breaths. Kapuler says she's amazed at how, for her, yoga has led to greater emotional stability, happiness and a deepening of human kindness.

"I practice it over and over," she says. "And I think it and I teach it, and I change."