Accessibility links
Should Alleged Cole Bomber's Testimony Be Secret? The man accused of masterminding the bombing in 2000 is expected to testify Wednesday about the more than four years he spent in secret CIA prisons. And that's why, critics argue, the government is trying to ensure that Abd al-Rahim al-Nashiri's testimony be heard in secret. 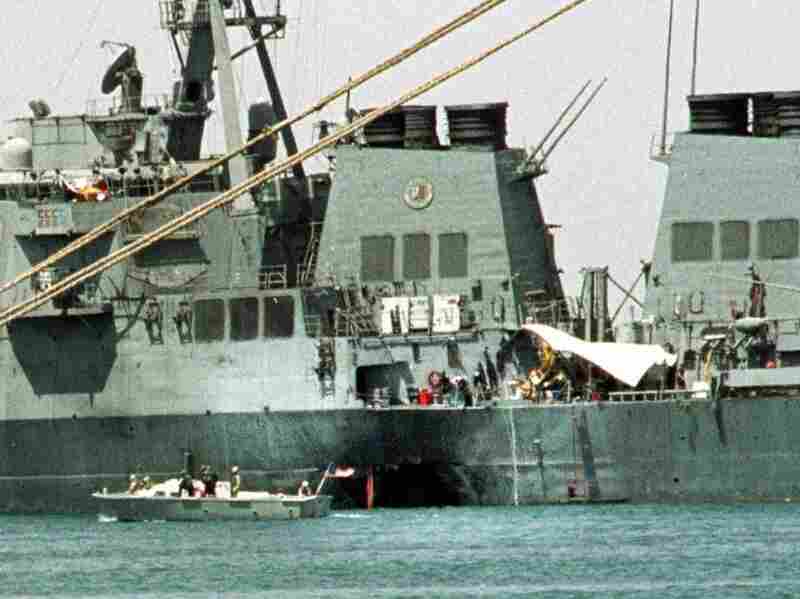 A small boat guards the USS Cole in Aden, Yemen, on Oct. 20, 2000. Abd al-Rahim al-Nashiri, the man accused of masterminding the attack, is expected to testify Wednesday in a courtroom at Guantanamo Bay. Hasan Jamali/AP hide caption 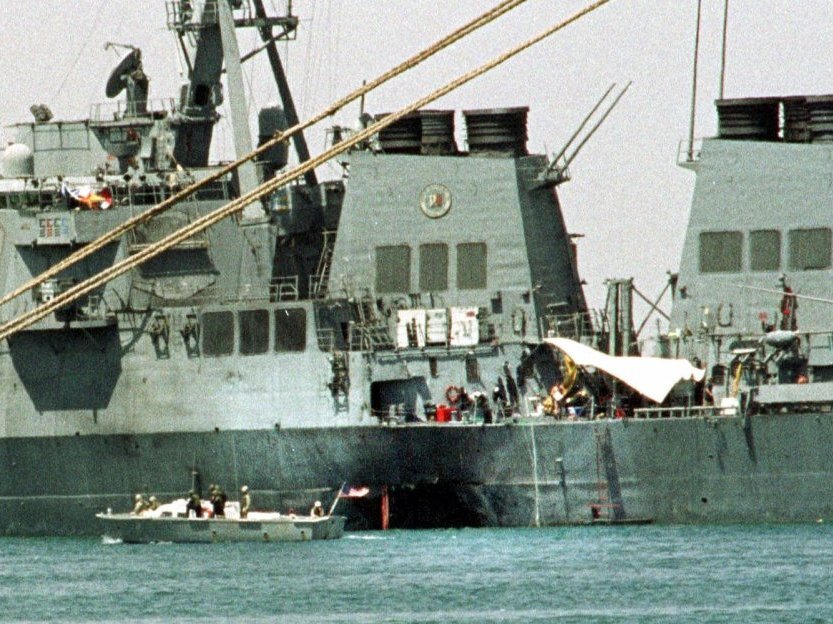 A small boat guards the USS Cole in Aden, Yemen, on Oct. 20, 2000. Abd al-Rahim al-Nashiri, the man accused of masterminding the attack, is expected to testify Wednesday in a courtroom at Guantanamo Bay.

In a courtroom at Guantanamo Bay on Wednesday, the man accused of masterminding the bombing of the USS Cole in 2000, Abd al-Rahim al-Nashiri, is expected to testify about the more than four years he spent in secret CIA prisons. Al-Nashiri is one of three terrorism suspects the U.S. government has admitted to waterboarding, so his testimony could be explosive. And that's why, critics argue, the government is trying to ensure that al-Nashiri's testimony be heard in secret.

"We know that he was held in CIA black sites in Poland and Thailand," says Melina Milazzo, a lawyer at Human Rights First. "We know from the CIA inspector general's report that he was tortured, including being waterboarded. So while what he is going to say probably won't be new, what people could hear, for the first time, is a detainee in U.S. custody speaking about the CIA interrogations as a firsthand experience — and that would be very powerful."

The government says the session needs to be closed because of the likelihood that classified information will be revealed. Al-Nashiri's defense team, and media outlets including NPR, have argued that the session should be open given that much of what happened to the man accused of orchestrating a suicide bombing against the Cole in Yemen has already been revealed — by the CIA itself. NPR is part of a group of news organizations that filed an objection to the Pentagon's effort to close the al-Nashiri proceedings. The group sent an attorney to Guantanamo to argue for an open hearing.

Al-Nashiri's actual trial doesn't start until November. This latest kerfuffle over his testimony is linked to a pretrial motion about how he should be restrained when he is meeting with his lawyers. When he is in court, the 47-year-old Saudi doesn't have to wear leg irons. Guards bring him in in handcuffs, but the handcuffs are removed once he reaches the defense table.

When his lawyers meet with him at the prison at Guantanamo, however, he is shackled to the floor. In fact, one of his lawyers told NPR that before al-Nashiri's arraignment several months ago, he had never actually seen his client walk — and he has been al-Nashiri's lawyer for years. The defense motion says the shackles that al-Nashiri wears when he meets with his lawyers at the prison remind him of his time in CIA custody, and that the experience is therefore traumatic. To drive the point home, al-Nashiri is expected to take the stand and to explain it to the judge himself.

A Bit Of A Delay

Watching a military commissions trial from the viewing gallery can be a little surreal. The action in the courtroom is out of sync with what observers can hear in the gallery because all the sound in the viewing room is on a 40-second delay. 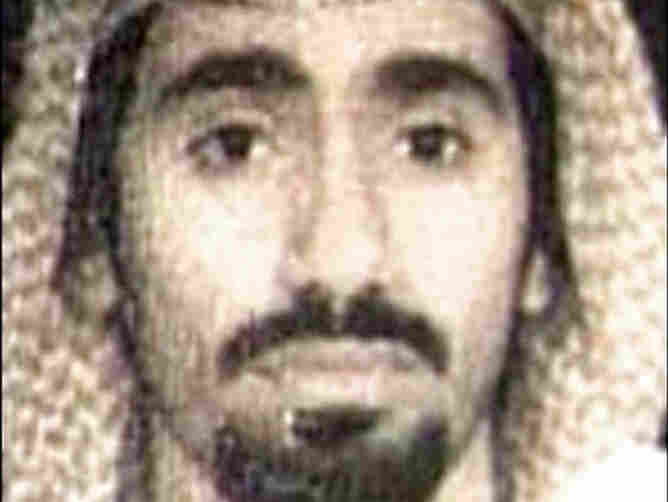 Al-Nashiri, pictured in 2002, is being held at the Naval base in Guantanamo Bay. Reuters/Landov hide caption 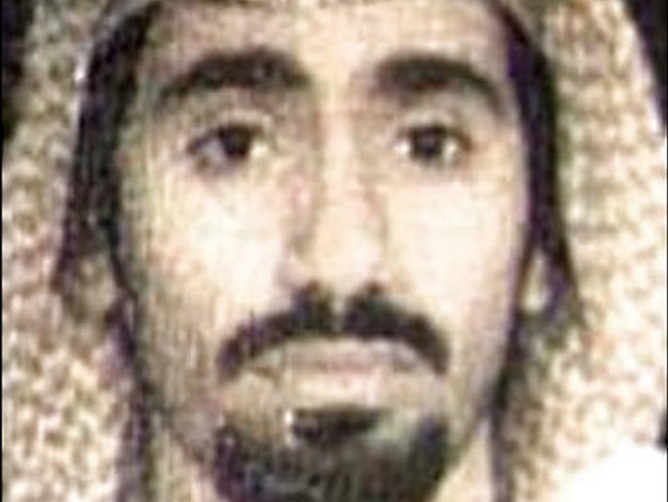 Al-Nashiri, pictured in 2002, is being held at the Naval base in Guantanamo Bay.

So, for example, by the time the gallery hears the judge introduced and the ritual words, "All rise," the judge has already been in the courtroom for 40 seconds. Attorneys are still making impassioned arguments on the closed-circuit television in the gallery nearly a minute after everyone has watched them sit down.

The delay is supposed to give intelligence officers time to press a button that covers any classified information that might be revealed with white noise. Defense attorneys argue that al-Nashiri won't publicly reveal anything secret during his testimony because the censors in the courtroom can prevent that from happening. When something sensitive is said, they can just push the button and provide the gallery with white noise instead. But when it comes to the testimony of al-Nashiri, the prosecution has argued that the white noise won't be enough.

"No one has said that our nation's secrets are an open book," said Brig. Gen. Mark Martins, the chief prosecutor for the military commissions. "Troop movements, intelligence about particular groups. ... There really are secrets that have to be protected."

Attorneys close to the case say the government's concern is more basic. Prosecutors are worried that al-Nashiri's testimony will provide a chilling first-person account of what CIA interrogations actually entailed — and it might prove to be a rougher version of events than the CIA inspector general's report chronicled.

Martins says that isn't the case. The government doesn't want the session closed to save itself embarrassment about the black sites. There are genuine concerns about national security, he said. "I think you can imagine situations in which there is still information that needs to be protected, even if a law was broken," he said. "The reason for holding it back can't be that something was embarrassing or a law was broken."

Sam Rascoff, a professor of national security law at New York University, says there is a broader principle at stake: the openness of the commission proceedings themselves. If al-Nashiri's testimony is held in secret without any observers, it suggests the commission process isn't open at all. And that's a sharp contrast with federal criminal courts.

"We expect federal criminal trials to be open proceedings," he said. "We could walk into a courtroom tomorrow in New York or anywhere across the country and expect to take a seat and watch a criminal trial unfold. We can watch the jurors. We can watch the prosecutors and the defense and the witnesses and so forth. Quite different is the circumstance in the military commission. And the defense is trying to surface those differences prominently and early on."

The other problem, Rascoff says, is that the officials who are deciding whether to close a hearing at Guantanamo aren't independent, like a federal judge would be. "It's ultimately the government, the same people who have a percentage in keeping something secret, who make the decision to do so," he said. "And that is bad optics."

A Prosecutor Makes The Case For Military Trials April 3, 2012