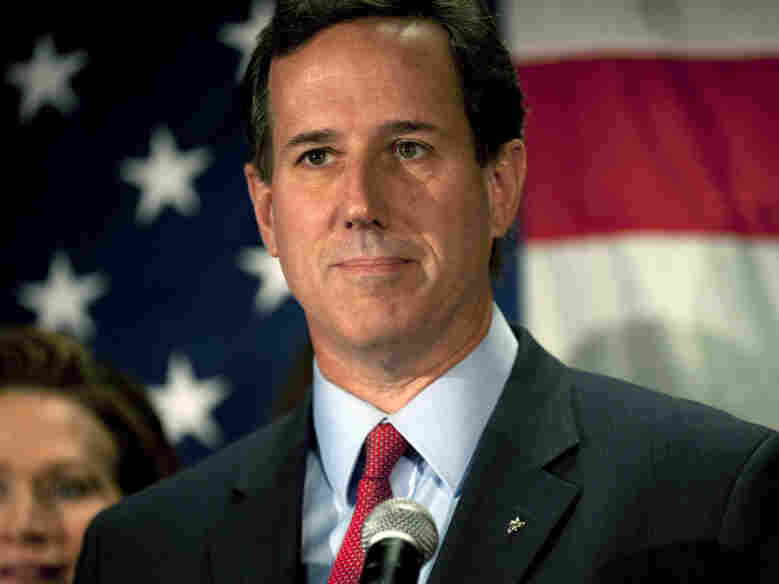 Republican presidential candidate Rick Santorum announced he will be suspending his campaign during a press conference at the Gettysburg Hotel on April 10, 2012 in Gettysburg, Pa. Mitt Romney is now virtually certain to capture the GOP nomination. Jeff Swensen/Getty Images hide caption 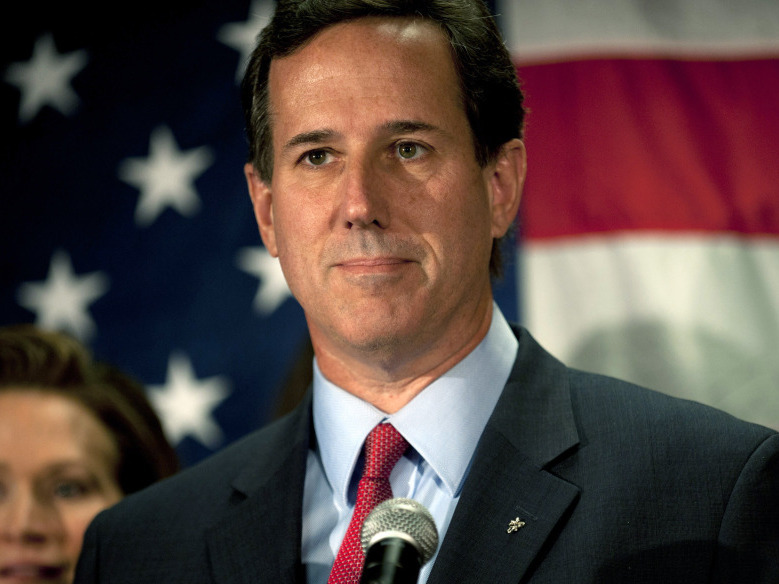 Republican presidential candidate Rick Santorum announced he will be suspending his campaign during a press conference at the Gettysburg Hotel on April 10, 2012 in Gettysburg, Pa. Mitt Romney is now virtually certain to capture the GOP nomination.

Read Another Opinion On Santorum Suspending His Campaign

Read Another Opinion On How Santorum Changed The GOP Primary

Ben Adler reports on Republican and conservative politics and media for The Nation as a Contributing Writer.

On Tuesday afternoon former Pennsylvania Senator Rick Santorum announced he is suspending his campaign for the Republican presidential nomination. Although his departure means that Mitt Romney's nomination goes from assumed to certain, Santorum has had a meaningful impact on the course of the Republican primary. He revivified the religious right and pushed his opponents to extremes on a host of issues.

Liberals tend to imagine the conservative base as implacable opponents of moderation and pragmatism. But in one crucial respect they are sophisticated political actors. They have long recognized that they cannot always ensure that every Republican nominee is a true believer in all their values. But rather than just picking up their toys and going home like Ralph Nader voters, they try to exercise influence in the Republican primary process to bring the nominee as far in their direction as they can. That's why they have so many doctrinaire policy pledges, and the Tea Party has targeted incumbent senators for even the most minor infractions.

To force the front-runner to address your concerns, you need leverage, which comes from a credible threat of defection. Mitt Romney, who ran in Massachusetts as a supporter of abortion rights and is now trying to move back to the center for the general election, is exactly the sort of mainstream Republican that the conservative movement excels at pushing around. Romney will be as moderate as he can get away with, to maximize his chances of winning the general election. But being so lacking in principle, he will also, when necessary, swerve far to the right to appease conservatives. And that is what he has to do repeatedly to fend off Santorum's challenge.

It was hard to imagine, even when staunch social conservatives such as Michele Bachmann and Rick Perry led the Republican field, that the primaries would become dominated by contraception. Few living politicians have made a point of decrying the immoral behavior that they believe contraception encourages. But Rick Santorum is one of them.

Santorum has been beating the drum for a confrontation with Iran for years. His incessant fear-mongering on the campaign trail and in Republican debates — like his bizarre assertion that the United States faces a socialist/Islamist/terrorist threat from Latin America — has helped the GOP find its voice on foreign policy. President Obama has prosecuted the war against Al Qaeda much more effectively than did President Bush. That has left Republicans in a bind, unsure of whether they should follow their reflex to characterize Obama as weak, as they typically denigrate Democrats, when they lack any evidence to support such a claim. Especially with Ron Paul's isolationist candidacy picking up enthusiastic support, Republicans were left flailing, attempting to somehow criticize Obama from the left and right simultaneously on issues such as Libya. Santorum, the most reliable proponent of neoconservative belligerence on the Middle East, argued forcefully with Paul in the debates and showed the way forward on foreign policy for other Republicans. The GOP message — that Obama has shown weakness towards adversaries such as Iran, China and Russia — may be absurd on the merits, but at least it's a tangible concept. And it fits nicely with the Republican tendency to treat foreign policy as merely a swaggering expression of domestic nationalist identity politics. Romney has recently pivoted towards painting President Obama as weak on national security.

On social issues, Santorum gave the religious right a reason to get out of bed. In recent years they had been supplanted by the Tea Party as the voice of right-wing populist anger. With Perry and Bachmann they had unserious candidates. When Santorum emerged in Iowa as a legitimate contender, religious conservative leaders had someone to coalesce around. Santorum ultimately won the majority of their endorsements.

His candidacy also demonstrated the ongoing political importance of evangelicals. In state after state, Santorum, a Catholic, won evangelicals, along with overlapping groups such as "very conservative" voters. Romney, a Mormon, won non-evangelicals, including Catholics. While some commentators have suggested this is a sign of social progress because it means voters no longer reflexively favor their co-religionists, it has a whole other implication. What Santorum's strength shows is that evangelical Christian Republicans continue to hold a strong preference for candidates who are intensely conservative on social issues and overtly religious. They alone are not quite large enough to single-handedly give such a candidate the Republican nomination, but their cohesive voting behavior means they remain a powerful force in the party.

Santorum even moved the debate rightward on economic policy. To shore up his fiscally conservative bona fides, Santorum had an economic platform that was far to the right of Romney's. Santorum would have cut taxes far more dramatically. In February, feeling a need to fend off Santorum's challenge, Romney changed his own tax plan, making it much more extreme and more like Santorum's.

Since then economic issues have been eclipsed by Republican hysteria over the possibility that some religious institutions will be forced to provide reproductive health coverage for their employees. While Santorum can hardly claim sole credit for execrable developments like the introduction of the Blunt-Rubio amendment to let employers opt out of covering treatments they find morally objectionable, his presence in the race has surely helped keep the spotlight on these issues that many women mistakenly thought were long settled.

Just a few years ago Santorum was a national laughingstock. He had lost re-election by an astonishing eighteen points. His most famous quote was a vulgar comparison between homosexuality and bestiality. Googling him brought up a mocking definition of his name. Now he is dropping out — at the right time, unlike Newt Gingrich — as the runner-up for the Republican presidential nomination. The last runner-up will be the nominee this time, just as the runner-up from 2000 was the nominee last time. If Santorum never makes another public appearance, he will have permanently changed the first line of his obituary from having left politics as a diminished joke back to being a significant right-wing leader. And this may not be the last we will hear from him.