Accessibility links
Romney And Ryan: A Budding Political Bromance One of the sharpest dividing lines emerging between President Obama and Mitt Romney is the budget introduced in Congress by Rep. Paul Ryan, R-Wis., with its sharp cuts in domestic spending and lower tax rates. The Obama campaign likes to call it the "Romney-Ryan budget." And Romney hasn't objected. 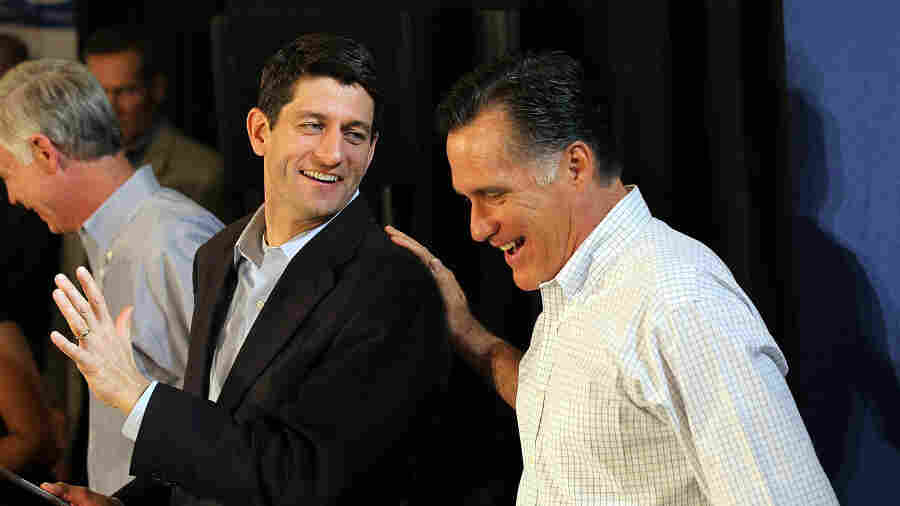 One of the sharpest dividing lines emerging between President Obama and GOP presidential front-runner Mitt Romney is the budget introduced in Congress by Rep. Paul Ryan, R-Wis., with its sharp cuts in domestic spending and lower tax rates.

Both sides see it as a winning issue for the fall campaign. The Obama campaign likes to call it the "Romney-Ryan budget" — and Romney hasn't objected.

On the campaign trail in Wisconsin, Ryan was a constant presence with Romney before that state's April 3 Republican primary, which Romney won.

Romney embraced both the plan and its author, the House Budget Committee chairman, saying he and Ryan are "on the same page."

How Big Of A Risk?

Linking himself to Ryan's proposed tax cuts and structural reforms for Medicare was a bold conservative move, says Vin Weber, an informal adviser to the Romney campaign.

"It helped with the Republican base, and it helped unify the Republican Party more broadly than that," says Weber. "But I think at the end of the day the question is, 'Will a serious approach to reforming Medicare — and thus dealing with our long-term debt problem — be a winning issue in the fall, or won't it be?' I genuinely fear for the country if it's not. But it is an open question."

So, there is some risk for Romney. President Obama is trying to make it as big a risk as possible.

"It is a Trojan horse. Disguised as deficit-reduction plans, it is really an attempt to impose a radical vision on our country," Obama said last week in Washington. "It is thinly veiled social Darwinism."

Ryan and Romney say they would balance out the lower tax rates for the wealthy by eliminating tax breaks, but they haven't identified a single one.

And as long as they leave that part of their plan blank, says Democratic strategist Geoff Garin, the Obama campaign is free to fill it in.

"In the world of compare-and-contrast politics, the Ryan budget creates a backdrop," says Garin. "We're talking about the possibility of Romney shifting more of the tax burden onto the middle class from the very wealthy, even as also cutting things that middle-class families depend on, including student loans, job-training programs at community colleges, and Medicare benefits for the elderly."

But Romney's embrace of the Ryan plan might help him with one key group of voters.

If we go through this entire campaign and don't talk about the tough measure of fixing the budget, then nobody's going to understand what the real kinds of choices are.

"Independents are extremely deficit sensitive," says Jim Kessler of the centrist Democratic group Third Way. "We just came out of a poll where once again, they rated it by far the No. 1 issue that they're both angry about and that they're worried about. And I think the Ryan budget puts it in play in the presidential race more than it had been in the past few months."

In current polls, independent voters favor the president. But in the latest Washington Post-ABC News poll, Romney got higher marks than the president on handling the deficit.

Of course, the deficit and tax reform aren't just campaign issues; they're urgent national problems that will have to be addressed by the next president and Congress.

Maya MacGuineas of the Committee for a Responsible Federal Budget, a bipartisan nonprofit, thinks the Obama-Romney debate may make that harder to do.

"It's all fine and good to talk about cutting unnecessary spending or raising taxes on the wealthy, because those things sound harmless to most people," says MacGuineas.

After a year of deficit commissions and supercommittees educating the public, the candidates are taking the debate backward, because neither is talking about the hard parts of budget cuts and tax reform, says MacGuineas.

"The Obama campaign hasn't gone nearly far enough yet in talking about how it would specifically reform and fix entitlement programs," she says. "And likewise, the Romney campaign has talked a lot about the rates it wants to lower, but not at all the tax breaks that it wants to get rid of to offset those costs. And if we go through this entire campaign and don't talk about the tough measures of fixing the budget, then nobody's going to understand what the real kinds of choices are."

And voters will be unprepared for the kinds of sacrifices they'll surely be asked to make after the election.