Accessibility links
Quakes Caused By Waste From Gas Wells, Study Finds The salty, toxic wastewater that's used in hydrofracking and other gas drilling is likely to blame for small earthquakes in the Midwest, a new study from the U.S. Geological Survey concludes. The water is pumped deep underground, where it lubricates faults and causes them to slip. 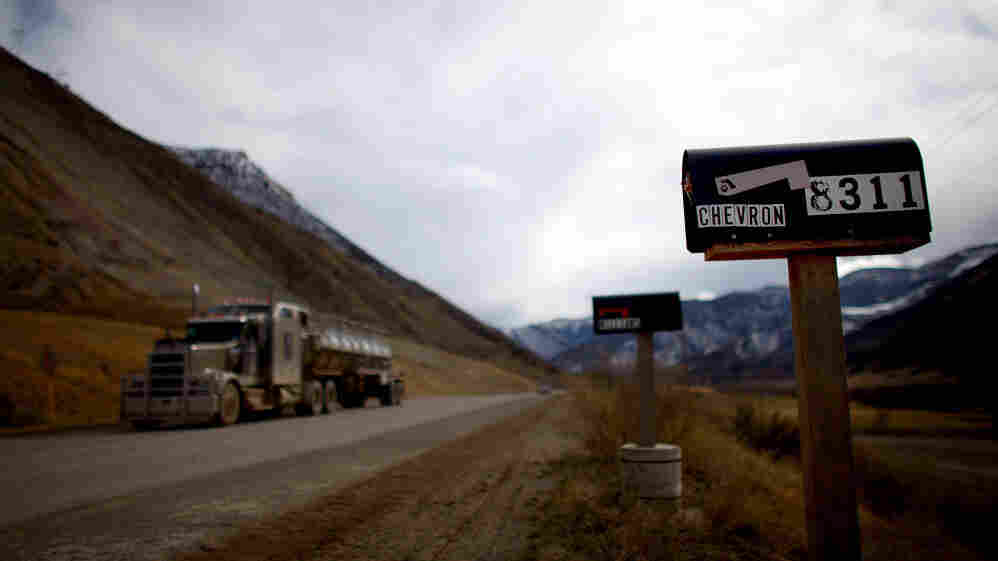 The U.S. Geological Survey will soon confirm that the oil and gas industry is creating earthquakes, and new data from the Midwest finds that these man-made quakes are happening more often than originally thought.

On Sept. 12, 2008, a new wastewater well, Trigg Well No. 1, opened for business in the Dallas-Fort Worth area. Wastewater gets pumped deep underground, about 2.6 miles below the surface. Later that same year, seismologists noticed a series of small but significant earthquakes around the same region. The quakes were rare for the area, and they were centered near the well and at about the same depth underground. The scientists concluded that the injection of wastewater had likely triggered the temblors.

Earthquakes happen when faults in the Earth slip and slide against each other. There's continuous stress on innumerable faults on our continent, but seismologists like Bill Ellsworth, from the U.S. Geological Survey, started seeing something odd about 12 years ago.

"One thing we had begun to notice was that there were an unusual number of earthquakes in the middle of the country," he says, an area not known for quakes. They were small, though — usually just over magnitude 3. Then, in 2009, the shaking got much more frequent.

"After that time, things really began to take off, and that's what really caught our attention," Ellsworth says. "It is really quite surprising." In 2009 there were 50 quakes a year in the middle part of the continent. There were 87 in 2010 and 134 last year.

This is so unusual that Ellsworth and other seismologists suspected it wasn't natural — they suspected the oil and gas industry.

Gas drilling is on the rise around the country, especially hydraulic fracturing. Hydrofracking uses billions of gallons of water a year to crack deep rock and release natural gas. Some have suspected that fracking was causing quakes, but evidence in several parts of the country points to wastewater wells, where companies dump used frack water. Ellsworth thinks his data confirm that.

"We find no evidence that fracking is related to the occurrence of earthquakes that people are feeling. We think that it's more intimately connected to the wastewater disposal," he says.

Ellsworth says most of these new quakes are clustered around places where there are waste wells.

Waste wells have been around for decades. There are tens of thousands of waste wells in the country, but very few quakes.

Hydraulic fracturing relies on high-pressure water and sand to break apart rock and extract natural gas. The wastewater generated by hydrofracking and other types of gas drilling is injected deep underground for long-term storage. Seismologists believe wastewater injection is causing earthquakes in some parts of the country. Waste wells often go deeper than gas drilling wells, down into basement rock, where faults are more common. Scientists think the water may be lubricating faults in the Earth's crust, causing them to slip.

What's changed is that the gas industry is using — and disposing of — more water. Waste wells are often deeper than gas drilling wells, down into basement rock where faults are more common.

And while the quakes are small, Ellsworth says they can happen anywhere.

"There are stresses that can produce earthquakes basically everywhere in the crust," he says. "And in most of the regions of the U.S., earthquakes don't happen, because those stresses are not changing. But if we have a way of unlocking them, such as by pumping fluid into an area where there is a pre-existing fault, it's possible that we can trigger earthquakes."

These waste wells are filled with water, and seismologist Cliff Frohlich at the University of Texas says that water affects a fault the way air does a puck in an air hockey game.

"The minute you put air on, it floats — the puck still weighs the same, but there's no friction to keep it from going horizontally," Frohlich says. "The same thing can happen on a fault."

The high water pressure basically separates a fault that has locked in place; the fault moves and creates a quake.

The more scientists study these induced quakes, the more they find. Frohlich has studied a "swarm" of 183 small quakes near Dallas that took place in 2008 and 2009. That's right next to one of the largest oil and gas plays in the country.

Frohlich suspects that it's not just waste wells creating quakes. In some areas, the amount of oil and gas taken out of the earth has changed the local geology. He looked at two quakes near the town of Alice, Texas — one in 1997, the other in 2010. Since the 1930s, the area has produced 100 million barrels of oil and nearly 3 trillion cubic feet of gas.

"Sometimes quakes [are] caused when you remove things from underground," he says. "There are quakes related to mining — you are changing the stress field with the material you remove, and that puts stress on a fault and you get an earthquake."

Frohlich notes somewhat reassuringly that so far, man-made quakes have not been any bigger than natural earthquakes in a region.

More About Fracking And Earthquakes From StateImpact