Accessibility links
Where Does America Get Oil? You May Be Surprised America is still dependent on foreign oil, but the sources are changing. Think Canada, Latin America and Africa. The Middle East is well down the list. What does this mean for America's foreign policy? 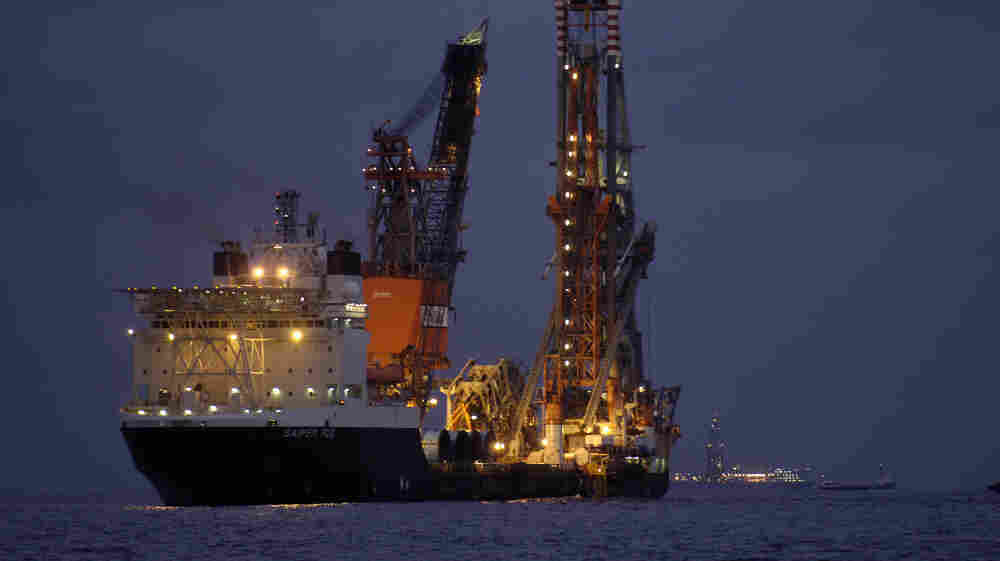 The source of U.S. oil imports has been evolving. Canada, Latin America and Africa have been sending more oil to the U.S., while Middle Eastern crude is playing a smaller role. This photo shows an oil operation in 2007 off the coast of Angola, a leading producer in Africa. Marcel Mochet/AFP/Getty Images hide caption

Since the Arab oil embargoes of the 1960s and 70s, it's been conventional wisdom to talk about American dependence on oil from the Persian Gulf. But the global oil market has changed dramatically since then.

Today, the U.S. actually gets most of its imported oil from Canada and Latin America.

And many Americans might be surprised to learn that the U.S. now imports roughly the same amount of oil from Africa as it does from the Persian Gulf. African imports were a bit higher in 2010, while Persian Gulf oil accounted for a bit more last year.

Where The U.S. Gets Its Oil

America is one of the world's largest oil producers, and close to 40 percent of U.S. oil needs are met at home. Most of the imports currently come from five countries: Canada, Saudi Arabia, Mexico, Venezuela and Nigeria.

Canada is far and away the biggest purveyor of crude to its southern neighbor, hitting a record 2.2 million barrels a day last year as its share of the U.S. market grew by 12 percent.

Energy expert Robert Rapier says the take-away for Americans may be "marry a Canadian," because he or she will be a citizen of an increasingly rich country. "Their budget looks good, and they're sitting on top of tremendous reserves," he says.

Saudi Arabia is a distant second, providing the U.S. with barely half as much crude as Canada. Other Persian Gulf countries also contribute to U.S. oil imports, but make up a relatively small share overall.

"People have tended to exaggerate how much oil we imported from the Middle East," says John Duffield, an energy expert and professor of political science at Georgia State University.

"In the long term, it may look like a historical anomaly that the U.S. became so involved in the Persian Gulf," he adds.

In terms of U.S. imports, Mexico is close behind Saudi Arabia in third place. Mexican imports did fall by more than 4 percent last year, partly because Mexico's oil production has been declining and partly because Mexican consumers are demanding more oil for their own use in an increasingly middle-class country.

It's a familiar story among oil-producing countries: As they become wealthier, they consume more of their own oil, says Rapier.

Although Venezuelan President Hugo Chavez is no fan of the United States, his country is still a big contributor to America's oil imports. That's at least partly because the economics of shipping Venezuelan oil across the Caribbean are so much more attractive than hauling it to other markets, such as Europe.

But Venezuela's exports to the United States fell by 5 percent last year, dropping to the lowest level in two decades.

Rapier says that's because Chavez's government has been neglecting its oil sector, "siphoning off money from its own industry and killing the goose that lays the golden egg."

Nigeria suffered an even bigger drop in its exports to the United States, down 22 percent last year from the year before, as oil production was disrupted by civil unrest.

Nigeria's turmoil has received relatively little attention in the U.S. even though that country now provides more oil to the U.S. than any Middle Eastern country except Saudi Arabia.

Does It Matter Where Oil Comes From?

In terms of global oil prices, analysts say the source of the oil isn't all that important.

"Anybody who follows the oil industry will tell you that it doesn't make any difference where the oil comes from," says Keith Crane, an energy expert at RAND Corp.

People have tended to exaggerate how much oil we imported from the Middle East. In the long term, it may look like a historical anomaly that the U.S. became so involved in the Persian Gulf.

Global oil markets are so intertwined, Crane says, that changes in any one part of the system can trigger effects elsewhere.

He points out that the U.S. has imposed sanctions on Iran and therefore does not import its oil. But "if Iranian oil goes off the [world] market, it still affects the price in the United States," Crane says.

Meanwhile, Iran has had no real problem selling its oil to Asian countries, though tougher sanctions are set to go into place this summer.

Now that the U.S. involvement in Iraq has wound down, Crane says, oil seems to be less of an American security concern.

"Do you need military might to preserve access to oil? I don't think there's a lot of evidence to say that's really important," he says.

Crane argues that many of the biggest security challenges the United States faces today are not directly related to energy. He points to the nuclear programs in Iran and North Korea, and the U.S. war in Afghanistan.

Analysts also point out that the U.S. is producing more oil domestically while reducing its dependence on oil in general.

The recent recession and the slow economic recovery have dampened demand for oil products. But "the big story is that the U.S. has really expanded production over the past several years," says Crane, citing the production of oil from shale in North Dakota and other states.

He notes that the country has also become more energy efficient, building cars with better gas mileage and shifting away from oil-based energy.

But the U.S. still spends huge sums on oil because the rise in world prices has more than made up for the drop in U.S. imports.