Accessibility links
Movie Review - 'Late Bloomers' - A Coming-Of-A-Certain-Age Comedy A couple grows apart as they take different approaches to getting older — the husband (William Hurt) in denial and the wife (Isabella Rossellini) overeagerly adapting to their imminent 60s. Critic Mark Jenkins says the film seems muddled at times, but still earns some laughs and gentle smiles. 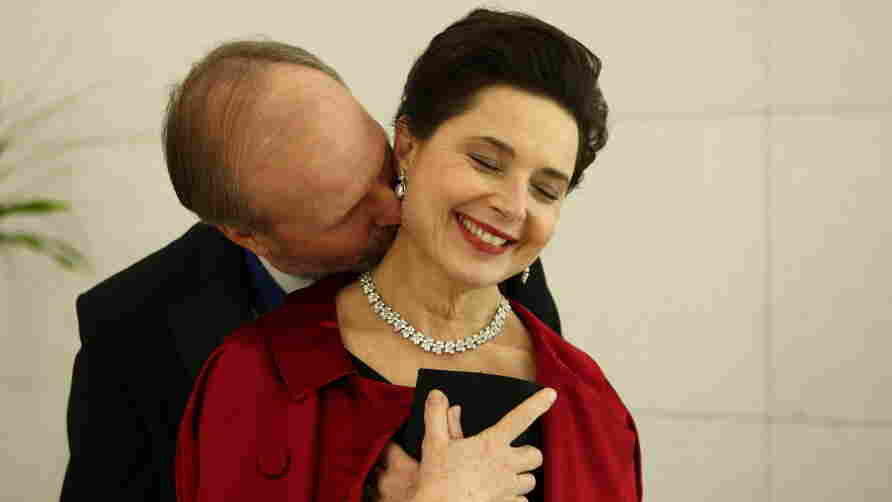 Both facing reminders that they're getting older, Mary (Isabella Rossellini) and her husband Adam (William Hurt) adapt differently to what acting their age means: Mary with bathroom grab-bars and Adam with Red Bull. Olive Films hide caption 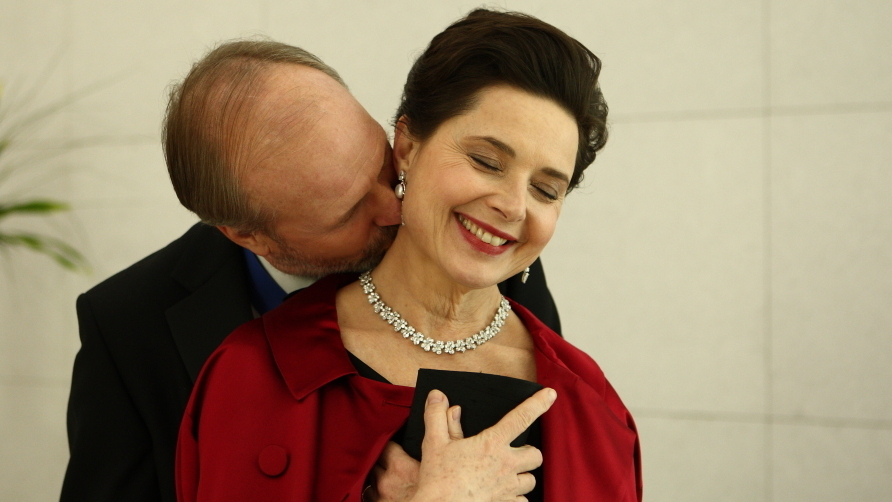 Both facing reminders that they're getting older, Mary (Isabella Rossellini) and her husband Adam (William Hurt) adapt differently to what acting their age means: Mary with bathroom grab-bars and Adam with Red Bull.

In English and Italian

The protagonists of Late Bloomers have a problem, but it's not that they're getting older. Their dilemma is that they're reacting so differently to aging. Mary (Isabella Rossellini) adapts somewhat overeagerly to her imminent 60s, buying a big-button phone and outfitting the bathroom with grab bars. Adam (William Hurt) prefers denial, and he reacts angrily to his wife's adjustments.

Adam has a point. While Mary has retired from teaching, he's a well-known architect who continues to work. The couple's three children — financier James (Aidan McArdle), physician Giulia (Kate Ashfield) and fledgling artist Benjamin (Luke Treadaway) — are grown. But Mary's feisty mother (Doreen Mantle), who raised her daughter in Italy, still lives right next-door to Mary and Adam's well-worn apartment in — uh, where?

Amid the cacophony of accents, it gradually becomes apparent that Late Bloomers is set in London, although director and co-writer Julie Gavras never establishes a strong sense of place. The movie's first third is a bit muddled, which could be intentional; Mary suffers a bout of memory loss, and fears senility. So maybe Gavras is attempting to simulate her heroine's frame of mind. But the film gets better as the somewhat labored setup recedes, and events and characters come into tighter focus.

Gavras' second fiction feature, Late Bloomers was inspired by the many late-career awards bestowed on her father, director Costa-Gavras. These accolades struck his daughter as premature obituaries, and she came to find them "quite harrowing."

So this movie opens with Adam winning an architectural award, and a well-wisher telling Mary that her husband "is a dying breed." She takes this comment too literally, and is soon having an MRI. The doctor tells her to boost her brain by keeping active, so water aerobics and volunteer work beckon, as her best friend (Joanna Lumley) urges her to relax.

Meanwhile, Adam instinctively recoils from the new job offered by a major client and old pal (Simon Callow): designing a retirement home. Instead, he buys into the dream of a flirtatious young associate, Maya (Lorna's Silence star Arta Dobroshi), who wants the firm to enter the competition to design a major new museum.

Adam starts working on the plan after-hours with the junior architects and is introduced to Red Bull. Soon, he's sleeping at the office while Mary builds a new life alone — or maybe with an admirer from the gym.

London was probably chosen as the movie's location so the Paris-based Gavras could work in English, which offers a larger potential audience. Yet many of the most evocative moments don't involve dialogue at all. Rossellini conveys an Everywoman's unhappiness with age simply by contemplating her neck as she pulls back its slack skin. The director wins smiles with a series of moments in which various family members, young and old, reach for those controversial grab bars. And there's a lovely scene where the estranged Mary and Adam communicate perfectly despite being on opposite sides of a room that's throbbing with electronic dance music.

Late Bloomers suffers from a stridently jaunty jazz score, and some gags that don't rise above sitcom level. And ultimately, it's not distinctive enough to draw viewers who haven't given much thought to aging. But that still leaves a substantial audience for the film's gentle laughs and modest insights.