Accessibility links
The Nation: Populism, Obama's Winning Strategy The Buffett Rule — that millionaires must pay at least 30 percent of their income in taxes Ari Berman of The Nation argues that Obama should hammer home the Buffett Rule to increase his reelection chances. 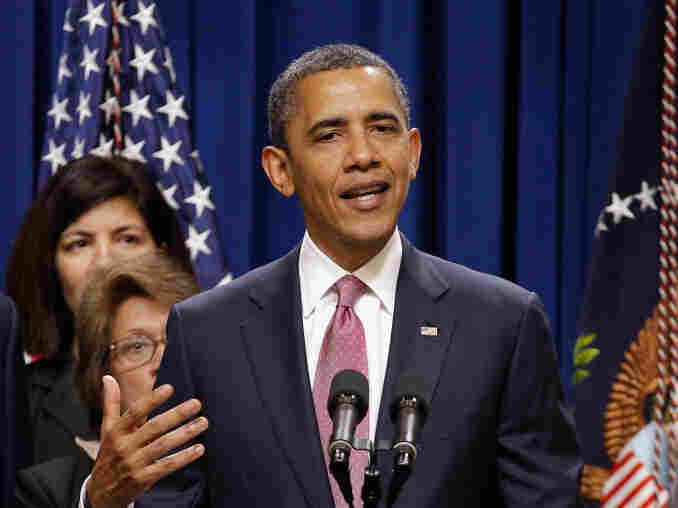 Standing with millionaires and their assistants, U.S. President Barack Obama makes a statement about the "Buffett Rule" in Washington, DC. Named after the billionare investor Warren Buffet, the "Buffet Rule" would ensure that the wealthiest Americans pay at least 30 percent of their income in federal taxes and is a centerpiece to Obama's re-election campaign. Chip Somodevilla/Getty Images hide caption 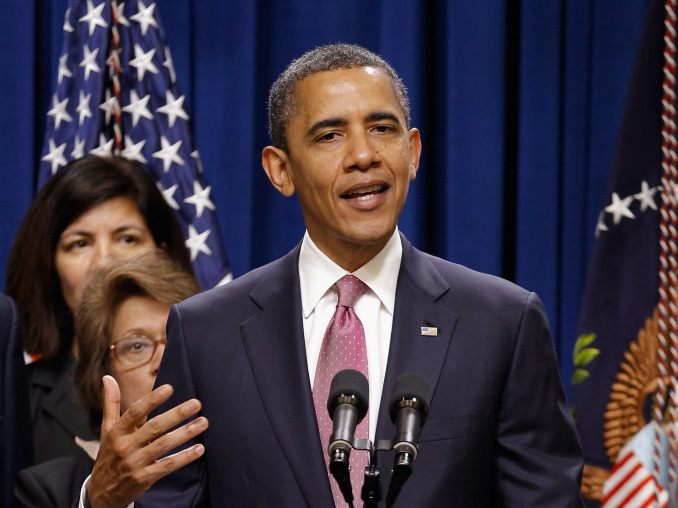 Standing with millionaires and their assistants, U.S. President Barack Obama makes a statement about the "Buffett Rule" in Washington, DC. Named after the billionare investor Warren Buffet, the "Buffet Rule" would ensure that the wealthiest Americans pay at least 30 percent of their income in federal taxes and is a centerpiece to Obama's re-election campaign.

Read Another Opinion On Inequality And Fairness

Ari Berman is the author of Herding Donkeys: The Fight to Rebuild the Democratic Party and Reshape American Politics

The centrist Democratic group Third Way has a new report out about "Swing Independents," who they claim are the Soccer Moms/Reagan Democrats/Rockefeller Republicans of 2012. (I prefer to think of them as the fickle souls who can't make up their minds.)

These Swing Independents, according to Third Way, make up 15 percent of the electorate and currently favor Barack Obama over Mitt Romney by 44 percent to 38 percent. But despite their soft pro-Obama leanings, Third Way argues that Obama's populist message of economic fairness is turning these voters off. Swing Independents care about "opportunity," not fairness, prioritize cutting the deficit over reducing income inequality, don't believe the US economy is skewed to favor the wealthy and "consider themselves to be haves, not part of the have nots," according to the report. In other words, Obama should cozy up to the banks (as if he hadn't already), stop campaigning on the "Buffet rule" and make the Bowles-Simpson debt plan the centerpiece of his presidency. (The presidency already tried that strategy for much of 2011, and it didn't work.)

It's hard to know who is more out of touch — Third Way or the "Swing Independents" they claim to speak for. At the very moment that prominent Republicans are admitting that Obama's focus on income inequality has put the GOP on the defensive, Third Way wants the president and Democratic candidates to drop the issue. That would be political suicide, not to mention terrible public policy.

This week a new ABC News/Washington Post poll asked voters: "what do you think is the bigger problem in this country — unfairness in the economic system that favors the wealthy, or over-regulation of the free market that interferes with growth and prosperity?" Fifty-two percent answered "unfairness," while only "37 percent" mentioned "over-regulation." A December 2011 Pew poll found that 61 percent of Americans believe the US economic system "favors the wealthy," with 36 percent saying it was "generally fair." In a November 2011 ABC News/Washington Post poll, 61 percent of the public said the federal government should "pursue policies that try to reduce the gap between wealthy and less-well-off Americans," with 35 percent saying it should not. So much for the canard that income inequality is an issue the public doesn't care about.

Following the president's State of the Union address in February, the Democratic polling firm Greenberg Quinlan Rosner tested a "middle class opportunity" message versus a "'fair shot' for the middle class" message on voters. "The two messages produced similar overall results," GQR found, refuting Third Way's findings. The middle-class opportunity/economy meme "was the strongest message among independents," GQR found, while the economic fairness theme "performed best in Congressional districts won by President Obama in 2008 and by a Republican in 2010 and among white seniors." Pitting opportunity against fairness is a false choice. It makes no sense to discard a populist message that is clearly resonating among a majority of the electorate.

The argument that progressive economic populism repels independent voters is "absolutely wrong," Democratic pollster Stan Greenberg told me. "If economic populism means championing the middle class and making sure the wealthiest pay their fair share as a way to address our problems, they're for that."

In the current economic climate, the president's advocacy for the Buffet rule and higher taxes for the wealthy is the right approach, Greenberg says. "Talk about fairness and inequality does not turn off voters," he says. "They agree with the assessment. They want those things in order to solve the main problem, which is what's happening to the middle class." Under this narrative, greater fairness leads to expanded opportunity.

The Third Way memo reflects the same kind of bad advice that self-proclaimed centrist Democrats bestowed upon Al Gore in 2000. Third Way is a successor of sorts to the now-defunct Democratic Leadership Council, which for many years "waged a scorched-earth campaign against 'populism' in the Democratic Party," wroteJohn Judis. These corporate Democrats blamed Gore's "people versus the powerful" speech at the 2000 Democratic convention for his loss, a hypothesis that Judis discredited long ago.

According to the Newsweek poll, Gore was down 48 percent to 38 percent just before the convention. At the end of August, he was ahead by 49 percent to 38 percent, a 21-point turnaround, the poll showed. Commented Washington Post columnist E. J. Dionne, "There can be no disputing the polls that showed that Gore's quasi-populist message at the 2000 Democratic convention helped send his numbers soaring past George Bush."

...If you look at Gore's poll ratings before and after his speech at the Democratic convention, his support shoots up among the very voters whom the DLCers believed were cool to such populist appeals. According to the NBC/Wall Street Journal poll, Gore's support increased 12 percent among voters who make between $50,000 and $75,000 per year (and by 19 percent among independents, according to the Gallup poll). If you look at the final results, Gore did relatively well among upscale voters, particularly those with high levels of education. Where he slipped precipitously from Clinton's margins in 1996 was among white working-class voters.

Gore lost the white working-class vote because of his stance on wedge issues like gun control and his negative association with Bill Clinton. Economic populism had nothing to do with it. Concluded Judis: "Gore's campaign on behalf of the 'people versus the powerful' almost lifted him to victory rather than plunging him to defeat.

Obama could lose the 2012 election for any number of reasons. But focusing on income inequality and fairness for the 99 percent will not be one of them.