Accessibility links
Myanmar's Isolation Gives Way To A Flood Of Visitors The rapid pace of political change in Myanmar in the past year — capped by the recent election of Nobel laureate Aung San Suu Kyi to Parliament — has tourists and foreign investors rushing to the country. And it's starting to get a little crowded. 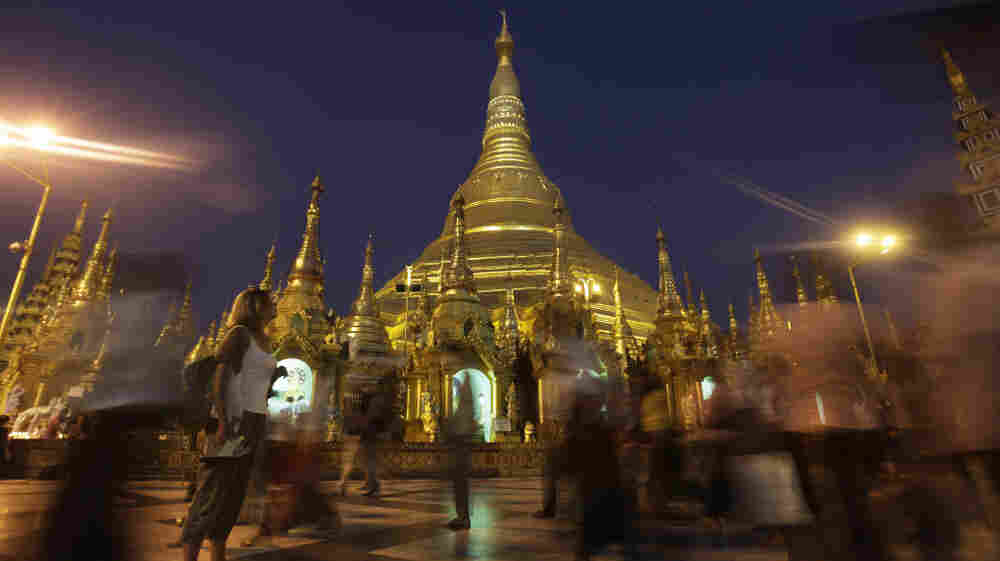 A foreigner pauses to look at the glittering Shwedagon Pagoda, a famous landmark in Myanmar, in Yangon in February. The country's tourism industry is racing to keep up with the rush of visitors now that Myanmar is opening to the outside world. Altaf Qadri/AP hide caption

Here's a word of advice for those who might be considering visiting Myanmar: Hurry.

The rapid pace of political change in the past year — capped by the recent election to parliament of Nobel laureate Aung San Suu Kyi — has many tourists and foreign investors rushing to Myanmar, also known as Burma. And it's starting to get a little crowded.

The Strand Hotel in Yangon, built in 1901, is arguably the city's finest. Mick Jagger stayed here. So did Rudyard Kipling, Prince Edward and many more of the rich and famous.

But for the past decade or so — thanks to the military's repressive rule and a lack of customers — it felt more like a museum, a lonely outpost where the hotel's general managers, who had been brought in from abroad, used to count the days left on their contracts.

"The future is a lot brighter. It's very nice to work in a hotel that is busy, generates some revenue, and you don't have to ask the owners each month for salaries," he says. 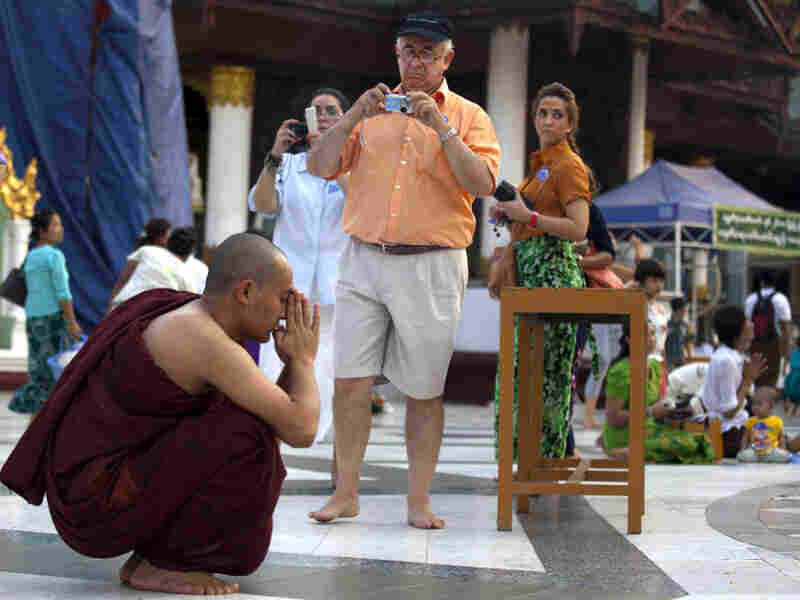 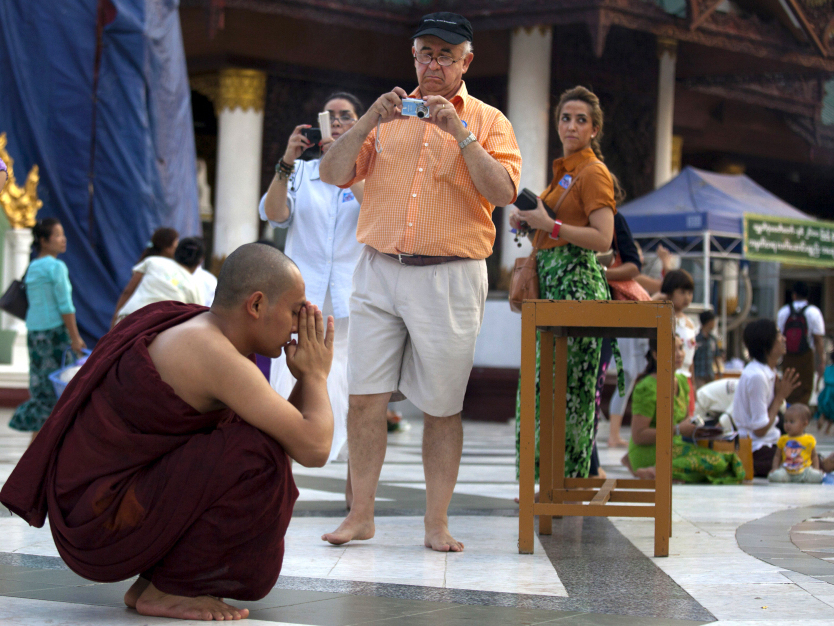 Foreign tourists photograph a monk praying at the Shwedagon Pagoda in Yangon, Myanmar.

Belmonte says the political changes have led to a run on rooms not just at The Strand, but all over Myanmar's largest city and former capital.

"The low-end hotels have doubled or quadrupled their price in the past six months, which means the gap between the top hotels and the entry ones is shrinking," he says.

In Yangon these days, he says, a room at a decent hotel runs about $200 a night, roughly what it used to cost to stay at The Strand — which now costs about $350.

And the boom times aren't limited to the former capital. Up north in Mandalay, the city's famous Mahamuni Paya Temple is busier than ever, as is Ashwin Kumar's boutique Hotel by the Red Canal.

Kumar, a Mandalay native, says business isn't just a little bit better this year — it's so good that he says the 25-suite hotel is 50 percent overbooked. He also says he is almost fully booked — and has gotten paid — for next year as well.

"The Europeans, Americans, they have no problem to come Burma. They love to come here now," he says.

Kumar says he is looking to build another hotel to keep up with demand and add more workers to the 70 he already employs — all of this in one of the region's poorest countries.

The Paradox Of Progress

Myanmar has vast untapped tourism potential, as the result of 50 years of brutal military rule and isolation that have kept much of the country seemingly stuck in time.

It's an unfortunate and heartbreaking situation for the people of Myanmar. But paradoxically, it's something that now makes the country more attractive to foreign tourists, such as American Marge Weiser and her husband, Irv.

She hopes Myanmar doesn't go the way of Vietnam, which she and her husband have visited twice. The first trip occurred just before the U.S. and Vietnam normalized relations in 1995.

"And I love Vietnam, and we went back again 10 years later. Such a dramatic difference. So beautiful the first time, and then so Western the second. I do a lot of traveling to places that are unusual," Marge Weiser says.

When asked if she likes to visit places "before they're ruined," she laughs.

"If you look at where this country has been the last 30 years, I'd rather have what's going to be than what was. I think it's exciting," he says. "I've always enjoyed seeing countries undergo change, and it's not always beautiful, but it'll be better. That's all."

Many of Myanmar's impoverished residents would wholeheartedly agree.