Accessibility links
The Case Of An Accused Leaker: Politics Or Justice? In a Virginia courthouse Friday, former CIA official John Kiriakou is expected to plead not guilty to violating the Espionage Act by sharing information with reporters. But some critics say his prosecution has more to do with his public comments about waterboarding than with damage to national security. 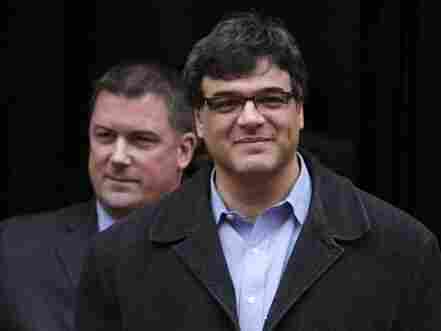 Former CIA official John Kiriakou heads to a Virginia courthouse Friday, where he's expected to plead not guilty. He's the sixth person accused of violating the Espionage Act during the Obama presidency.

Prosecutors say Kiriakou, 47, broke a solemn pledge he took when he joined the CIA in 1990 by sharing information about his former colleagues with reporters at The New York Times and ABC News.

"This is really all about politics and has little to do with justice," says Jesselyn Radack, who works on security and human rights for the Government Accountability Project.

Radack says the pursuit of Kiriakou has more to do with his public comments about waterboarding, or simulated drowning of terrorism suspects, than with any real damage he did to national security.

After all, Radack says, the biggest leaker in the U.S. is the government itself, happy to share details about its success, such as the mission to kill Osama bin Laden.

"I think everybody would agree that transparency within government is a good thing and is necessary to a functioning, democratic form of government," says Ken Wainstein, who used to lead the national security division at the Justice Department and is now a partner at the Cadwalader, Wickersham & Taft law firm in Washington, D.C.

But he says that goal can conflict with the running of sensitive intelligence operations.

"When you sign on for employment in a national security agency, you promise to maintain confidentiality in what you're doing," Wainstein says, "and you promise that you will not disclose government secrets."

And that, the Justice Department says, is a promise that Kiriakou broke — repeatedly — in his contacts with at least three reporters.

He's accused of violating the Intelligence Identities Protection Act for sharing the name of an undercover CIA operative.

Steve Aftergood, who follows government secrecy for the Federation of American Scientists, says that law has never been used in a case that actually went to trial. And there's another hole in the argument, he says.

"The name of the undercover officer never became public, so, you know, what's a jury going to do with that? It seems unlikely they're going to throw the book at the defendant if the offense was a technical one," Aftergood says.

Kiriakou is also charged with three counts of violating the Espionage Act, in part for telling reporters that another colleague worked on the capture of al-Qaida suspect Abu Zubaydah.

Aftergood says the Justice Department may face a big hurdle there, too.

"The government will have to show that Mr. Kiriakou did not simply reveal classified information, but that in doing so he specifically intended to harm the United States or to aid some other foreign country," Aftergood says. But there's no public evidence that Kiriakou, a 14-year CIA veteran, had any such intention.

Last year, the Justice Department mostly backed off another controversial espionage case, against Thomas Drake, a former worker at the National Security Agency.

But the legal process took a heavy toll, Radack says.

"I think the human cost is that people at best end up blacklisted, bankrupt and broken," she says. "John Kiriakou right now is selling his house to be able to pay legal bills."

Those are bills that could run upward of $1 milllion. His friends have set up a website to take donations.

But Wainstein, the former Justice official, says authorities weigh the importance and sensitivity of a leak, among other factors, before they ever decide to move forward with a serious criminal case.

"The reality is the Justice Department does not willy-nilly prosecute every leak of classified information," Wainstein says.

Kiriakou faces as many as 30 years in prison.