Accessibility links
There's A Reason It's Called Rocket Science The history of rocket launches is filled with failure, but out of those failures came knowledge that helped lead to success, experts note. The question is whether North Korea's latest failure will put it on a successful path. 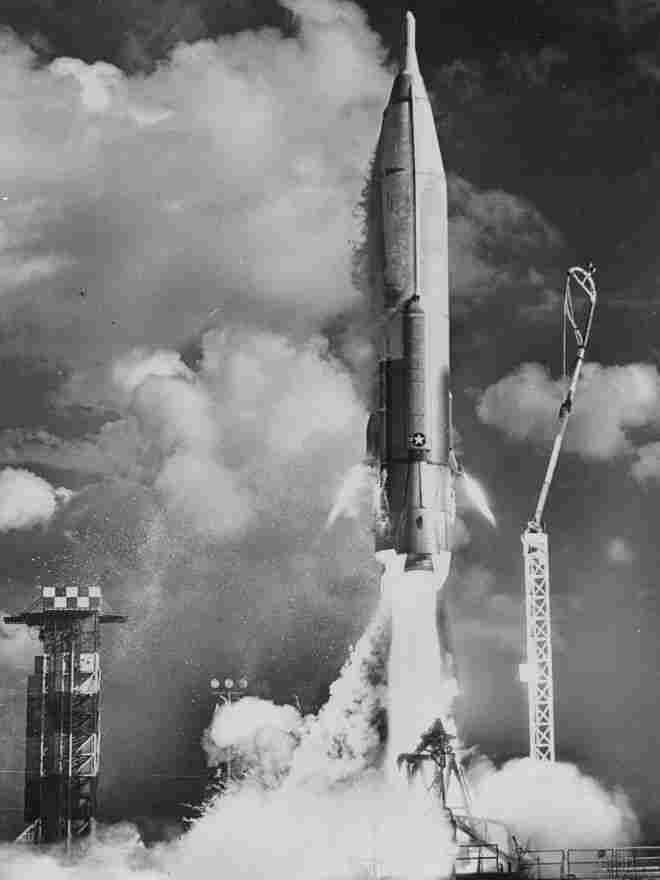 An Atlas missile is launched from Cape Canaveral, Fla., in October 1964. Cape Canaveral has been the site of numerous launch failures as the United States developed missile and rocket technology. Fox Photos/Getty Images hide caption 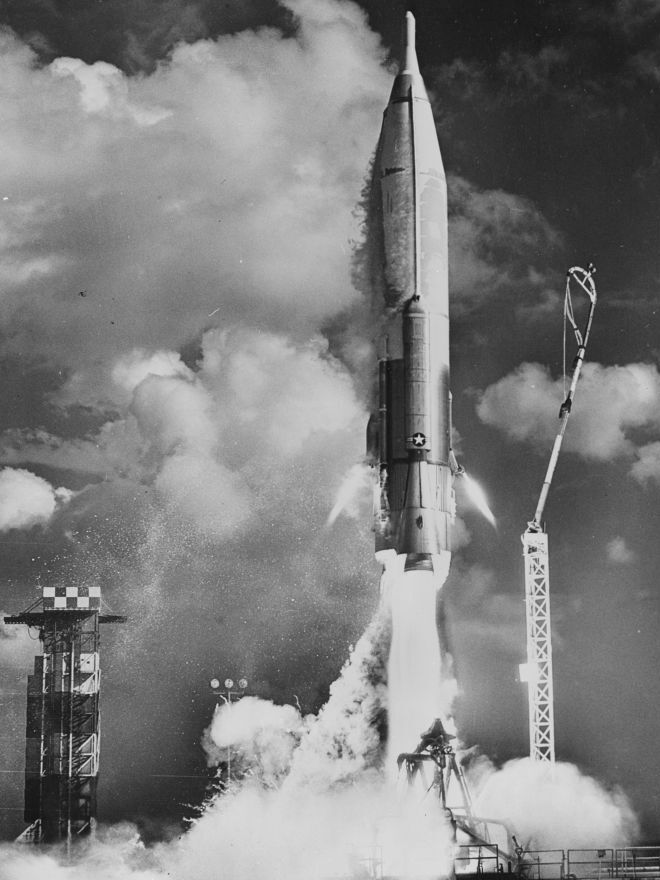 An Atlas missile is launched from Cape Canaveral, Fla., in October 1964. Cape Canaveral has been the site of numerous launch failures as the United States developed missile and rocket technology.

North Korea this week quite literally demonstrated an old truism, with the world as an anxious witness. It turns out that reaching space is, as the saying goes, as tough as rocket science.

The much hyped launch of the Unha-3 rocket, which North Korea said was meant to place a satellite into orbit to celebrate the centenary of the country's "Great Leader" Kim Il Sung, apparently failed Friday shortly after launch. It was the fourth time North Korea had tried and failed to do it, adding to the growing worldwide history of failed rocket launches.

So why is missile and rocket technology so difficult to get right?

Failure Is Always An Option

Jim Walsh, a research associate at the Massachusetts Institute of Technology's Security Studies Program, says the first thing to consider is that lots of things can go wrong.

One of the biggest technical challenges to getting a satellite into orbit — or a long-range missile to its target — is "getting the staging right, so that the separation and ignition occurs at the right time and in such a way that it doesn't change the rocket's trajectory," says Greg Thielmann, a senior fellow at the Washington, D.C.-based Arms Control Association.

The more stages, the greater the difficulty. Like most satellite launch vehicles, the Unha-3 is a three-stage vehicle.

"It's not just that adding a second stage just makes it doubly difficult or that adding three stages makes it three times as difficult," says Walsh. "It goes beyond that. You're trying to integrate those stages and, in this case, carry a payload into orbit. So, it's substantially more challenging and that's why you have so many failures."

And in rocket science, failure is always an option, says Walsh. He points out that while the capability to launch either a spacecraft or a warhead is substantially the same, producing a nuclear bomb such as the one North Korea successfully tested in 2006 "turns out to be far easier to do than to develop a three-stage rocket that can carry it halfway around the world."

For Pyongyang, the talent pool for engineers and rocket scientists is shallow. While some of that expertise exists elsewhere, it takes thousands of qualified individuals, Walsh says.

What you really need to launch satellites is people who have had experience — and lots of it — at getting things wrong, says Guy Ben-Ari, deputy director and senior fellow with the Defense-Industrial Initiatives Group at the Center for Strategic and International Studies.

You really need to have a talent pool that has experience working on these issues.

"It's not enough to have access to the published papers, the plans and the documents," he says. "You really need to have a talent pool that has experience working on these issues."

There's another complexity that may be more important than the complicated inner workings of a rocket. It has less to do with technology than it does culture, says Ben-Ari.

"How do you structure an organization with so many working parts that need to come together for a common goal? How do you incentivize the right amount of risk-taking, how do you manage knowledge and information-sharing among different parts of the organization? That's not easy," he says.

Even in the United States, those hundreds of thousands of individuals worked together under the NASA rubric that eventually sent men to the moon. In North Korea, a society in which the individual consequences of failure could be quite severe, creating a workable management structure could be supremely difficult, says Walsh.

"In a society like North Korea, people are risk-averse and extremely cautious. That's probably not the best culture for a huge, technical endeavor like this," he says. "When mistakes happen, they may not get corrected out of fear."

The evidence that North Korea's rocket program may suffer from disorganization goes beyond the obvious string of failures, says the Arms Control Association's Thielmann.

"We can see evidence that they are digressing from a well-managed program," he says.

Each of the four failed launches involved a different staging configuration, he says.

"Testing is everything in a rocket program, and you can't control the variables that way," Thielmann says. "The more you change things around, the less likely you are to get usable results."

If North Korea is going to successfully weaponize its nuclear arsenal so it has the capability to rain warheads on the West, it's going to take a lot more work, Thielmann says.

Thomas Donnelly, a defense and security expert at the American Enterprise Institute, acknowledges that North Korea's rocket program faces some steep obstacles. At its core, ballistic missile technology is still rocket science — but it's getting easier, he said.

"As it was for us, the engineering challenges are difficult," he says. "But you're not inventing new science here. You just need the resources to do this repeatedly. This is definitely a case of practice makes perfect."

Sooner or later, North Korea will have rockets that work, he warns.

"Relying on them to fail is not a great plan. They are trodding a path that many nations have trod before," he says.