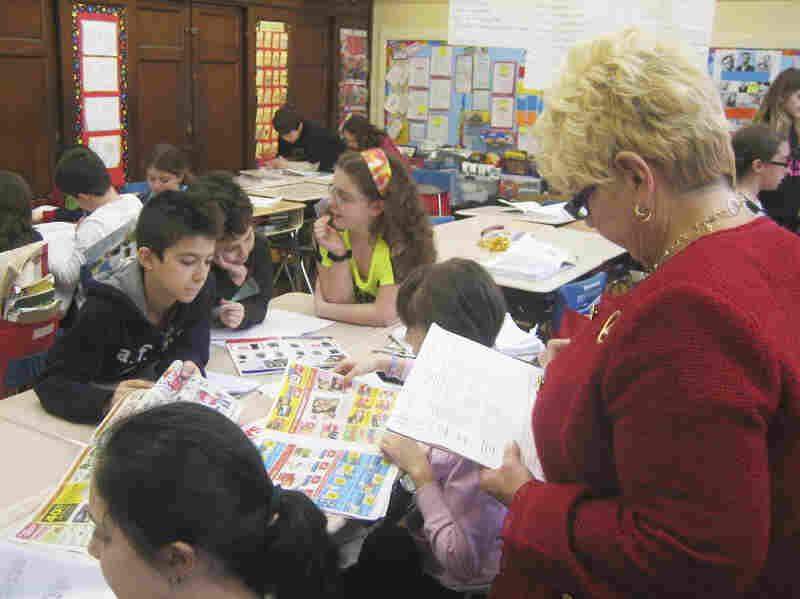 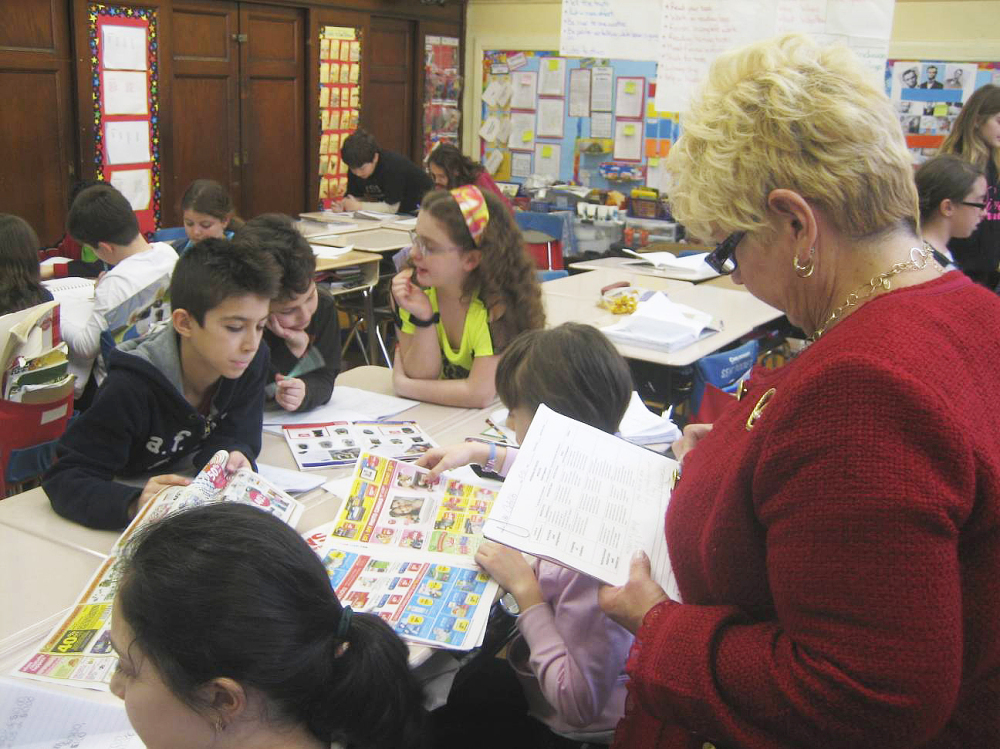 Katherine Moloney, principal of P.S. 100 in Brooklyn, says that evaluating teachers on test scores alone is not enough.

How do you measure who is an effective teacher?

More states are wrestling with that question, now that the Obama administration is encouraging schools to evaluate teachers with a combination of student test scores and classroom observations.

The question of whether teacher evaluations are reliable indicators for teacher effectiveness has long been controversial. But New York City reignited the debate when it rated thousands of teachers with test scores alone — and then released those ratings to the public.

On a recent day, Moloney observed fifth-graders poring over recipe books. Their teacher is using the books to show how fractions are used in daily life.

The students won't actually make the recipes they're studying, but they will use them to create mathematical problems. Moloney is delighted by the teacher's creative touch.

"The work that's going on in there — the discussion, the excitement — that's what good teaching is about," she says.

And yet that teacher, Nicole Weingard, received one of the lowest scores in the school when the city released its ratings in February. She wound up in the bottom 20 percent citywide.

But most of Weingard's students easily passed their state exams.

"I was very upset about the rating," Weingard says. "I don't think it reflects any way, shape and form how I am as a teacher. I've been teaching for eight years. I can probably count on one hand how many of my students didn't perform well."

That's just one reason why New York City's ratings were criticized: The system gave less weight to student performance than to how much progress students made on the state exams from one year to the next. Because Weingard teaches an honors class, her high-scoring kids don't have a lot of room for improvement.

The ratings didn't affect Weingard professionally. But during the three years in which the ratings were calculated, principals throughout the school system did use them to make tenure decisions.

The city also acknowledges the ratings had huge margins of error: as many as 30 to 50 percentage points. That bothered Moloney.

"The data itself that this is based on is so disproportionate to real, actual teaching practices," she says. "And the data itself is not good."

Moloney says these problems could explain why no parents at her school voiced concerns about their teachers when the ratings were released to the public. Although a citywide poll found most parents approved of releasing the ratings, only 20 percent said they trusted them.

Jeff Jacobson, whose daughter also attends elementary school in Brooklyn, says he sympathizes with the teachers.

"I'm sure they're under a lot of pressure," Jacobson says. "I hate to see good teachers go just because a couple of kids didn't test well. And that determines whether they keep their job or not."

New York City's experiment has given new ammunition to critics — especially teachers unions. But the Obama administration is making some federal funds contingent on the adoption of new teacher-evaluation systems that include student test scores.

Eric Hanushek, a senior fellow at Stanford University's Hoover Institution, says scores can be useful in identifying teachers who are consistently at the top and bottom.

"There are systematic ways that you can get the error rates quite low and within reasonable bounds," he says. "And most systems that talk about using this information would not make a judgment on a teacher based on a single-year observation."

Most school systems also have an appeals process to ensure that the data used were accurate, Hanushek says.

The ratings in New York City were released to the media when the teachers union lost a lawsuit to keep them private. Mayor Michael Bloomberg says parents have a right to see them.

"The arrogance of some people to say that the parents don't have the ability to look at numbers and put them in context and to make decisions is just astounding to me," Bloomberg said at a press conference.

New York state has given its school districts until next January to implement their teacher evaluation systems. If they don't, they risk losing state education aid.