Accessibility links
The Magnetic Fields: 'Out Late At A Bar, Writing A Song' While composing the songs on his band's latest record, frontman Stephin Merritt felt most inspired with a cocktail in one hand and a pen in the other. 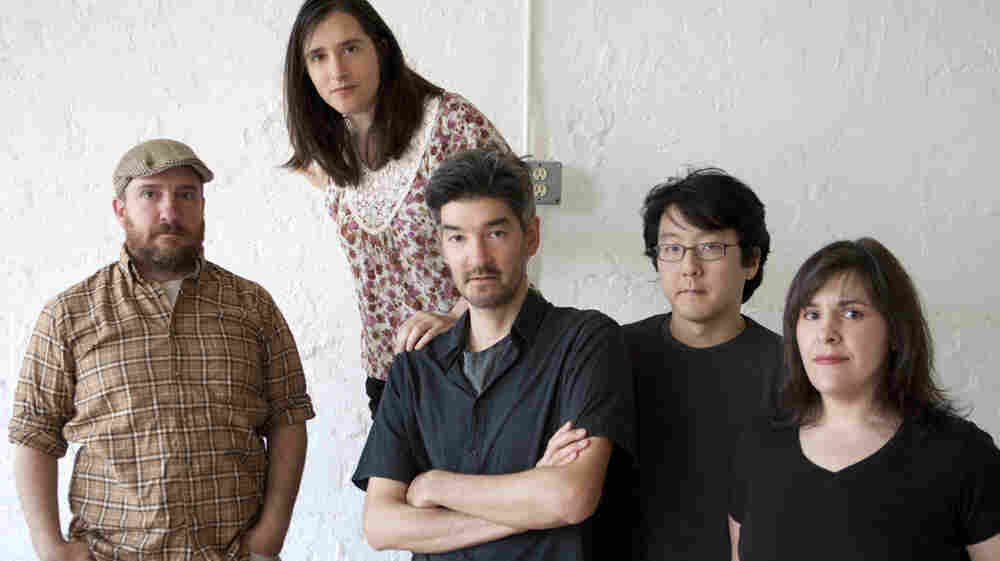 Stephin Merritt (far left) has led The Magnetic Fields since the early 1990s, with a songwriting style that ranges from sincere to bitter to ironic. Marcelo Krasilcic hide caption

For more than 20 years, the indie-pop group The Magnetic Fields has been singing songs about love, though not always in the traditional sense. With a style that ranges from bitter to sincere to ironic, Stephin Merritt — the group's frontman, writer and producer — has created a growing cast of characters surviving love's vicissitudes.

In his characteristic deadpan, Merritt tells NPR's Linda Wertheimer that he owes the inspiration for many of those characters to a particular ritual of his.

"I sit around in gay bars and write with a cocktail in one hand, and a pen in the other, and a notebook in the other," he says.

In fact, some songs on the band's new album, Love at the Bottom of the Sea, stemmed specifically from Merritt's nights on the town.

"I woke up one morning and saw that my car was not in the driveway," Merritt says. "And I thought, 'I must have left the car at the bar so I wouldn't kill anyone on Santa Monica Boulevard.' So I looked in my song notebook, and there was [the song] 'Andrew in Drag.' And that's all I know about the writing of 'Andrew in Drag.' "