Accessibility links
Who Is A Parent? Surrogate Technology Outpaces Law For thousands of years, there was no doubt. A woman who gave birth was that child's mother, and her husband the presumed father. Thanks to scientific advances, multiple people may be involved in creating a child now, but the law has not caught up. 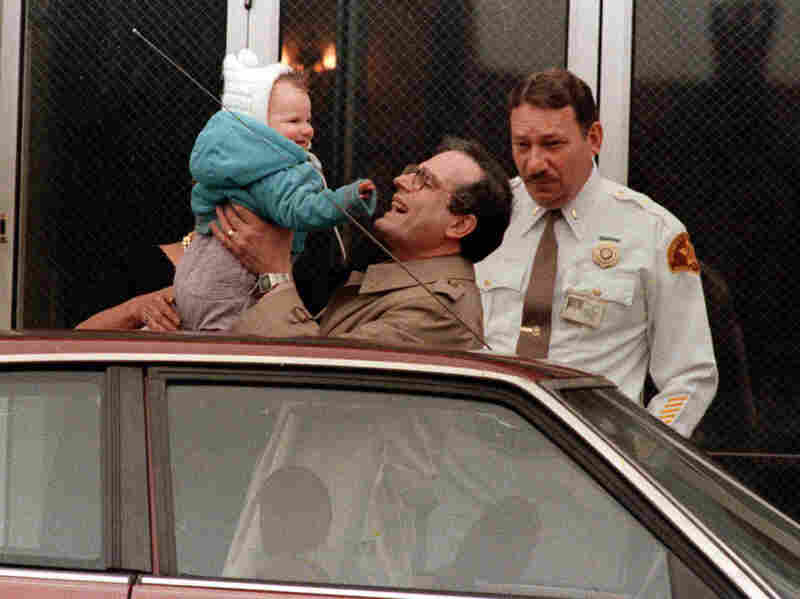 William Stern holds his daughter, then known as Baby M, in 1987. The Sterns' surrogate tried to keep the baby after she was born. Their court battle became the first public debate about surrogacy. M. Elizabeth Fulford/AP hide caption 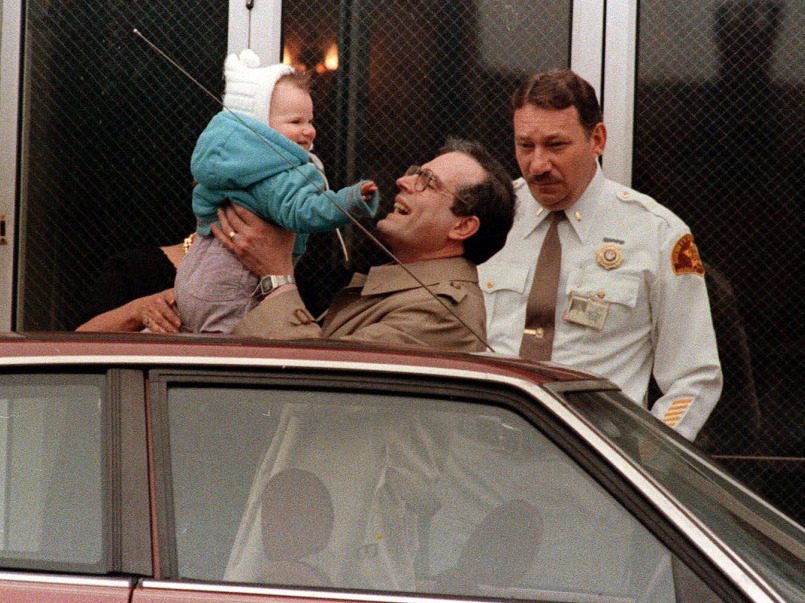 William Stern holds his daughter, then known as Baby M, in 1987. The Sterns' surrogate tried to keep the baby after she was born. Their court battle became the first public debate about surrogacy.

Third in a four-part report

These days it can take a village to create a child. Technology means someone who never thought they'd be able to conceive can use a sperm donor, an egg donor and a surrogate — a woman who bears a child for someone else. But the law has not kept pace with technology, and with so many people involved, a key question remains: Who is a legal parent?

For thousands of years, there was no doubt. A woman who gave birth was that child's mother, and her husband the presumed father. But 25 years ago, a challenge to this notion exploded into a courtroom battle that riveted the nation.

A couple in New Jersey hired a woman to have a baby for them, but after delivering a daughter, the woman changed her mind. A protracted custody battle ensued. In 1988, New Jersey's Supreme Court declared surrogacy contracts invalid, saying, "There are, in a civilized society, some things that money cannot buy."

The Baby M case, as it was known, was the first public debate about surrogacy, and its ruling had a profound effect. Many states passed laws to restrict surrogacy. Yet since then, the practice has exploded, with more than 1,400 babies born to U.S. surrogates in 2010, according to the Society for Assisted Reproductive Technology. Many more births were likely unreported.

"Oh yes," says Michele Zavos, a family law attorney in Maryland. "We've got surrogacy companies, we've got the Internet. It is a big, big change."

The surrogate in the Baby M case used her own eggs. Today, though, nearly all surrogates become pregnant through in vitro fertilization, using another woman's eggs. Sometimes those eggs are from the woman who wants to be a mother, sometimes they're from a donor.

Read More From This Series

Steve Snyder of the American Bar Association says many family laws were written years — if not decades — ago. Even basic legal terms like "biological mother" can now seem unclear.

"Well, now, if one woman can give birth," he says, "and another woman can provide the egg, so what did they mean by 'biology?'"

Snyder and Zavos are among a growing number of lawyers pushing for a broader definition of parent, one based simply on someone's "intent."

"Is [a parent] somebody who decides to have children with somebody else?" Zavos asks. "[Someone] who acts as a parent throughout a child's life? Is it somebody that the biological or legal parent invites in to be a parent?"

She believes the answers should be yes, yes and yes.

A few courts have recognized "intent," and some states have passed laws to make surrogacy easier. But the practice is largely unregulated, and lawyers are left to work through a tangle of varied and conflicting state laws. Their aim: to create legal parenthood where it never existed.

They may use adoption, or something called "voluntary acknowledgment of paternity." Some states now allow a "pre-birth order," which designates the intended parents and allows their names — instead of the surrogate's — to go on a birth certificate. Attorney Snyder says each case can feel like a puzzle.

"So the question is like a Rubik's cube," he says. "How do we get intended mom on the blue side, with all the other blue pieces, and get the surrogate, the yellow piece, off of there."

"This is not for some trial judge in a family court to make up law," says attorney Harold Cassidy.

Cassidy represented the surrogate in the Baby M case, and he still defends surrogates who change their mind. Pregnancy is profound, he says, and in aiming to help infertile couples, legal contracts ignore the rights of the woman who gives birth.

"In many ways these contracts are uninformed," he says, "because the woman is asked to make a promise to do something before the child is even conceived."

Gail Robinson is one of Cassidy's clients who found herself backing out of that promise. In 2005, she agreed to carry twins for her brother and his partner. But, she says, "The bond and love for the girls that developed was far more powerful than anything I ever expected."

The law has not embraced the concept of separating motherhood from giving birth.

After a falling out with the couple, she sued for custody. Because part of her case is on appeal, Robinson declined to be interviewed, but agreed to read a statement.

"The growing sense of moral obligation to my daughters increased as I realized that my daughters needed their mother," she told NPR.

Robinson lives in New Jersey, the same state where the Baby M case played out, and where the law still deems surrogacy invalid. A court found Robinson to be a lawful parent, and late last year she was awarded visitation rights, even though she has no genetic connection to the twins she carried.

"The law has not embraced the concept of separating motherhood from giving birth," Snyder says. He says society accepts that sperm or egg donors are not "parents." But pregnancy seems sacred.

"To believe that a woman can have no remorse or resistance to giving the child up is at direct odds with our societal notion of what motherhood is," he says, "even though that was her intent before she ever got pregnant."

Still, Zavos believes the law will eventually recognize those who arrange for the creation of a child with the intention of becoming a parent.

"Technology is leading it," the attorney says. "People can have children. And the most important thing is, are they going to be a good parent?"

One thing both sides agree on: the need for more legislation to regulate surrogacy. But that's not likely to happen without more consensus on who should be deemed a parent.