Accessibility links
Three-Minute Fiction: The Outliers She closed the book, placed it on the table, and finally, decided to walk through the door. I must avoid slipping into banal sentimentality, Justine thought. Easy to do after pressing flowers between law books. The weight of their antiquated decisions flattened columbines, penstemon and lupine. 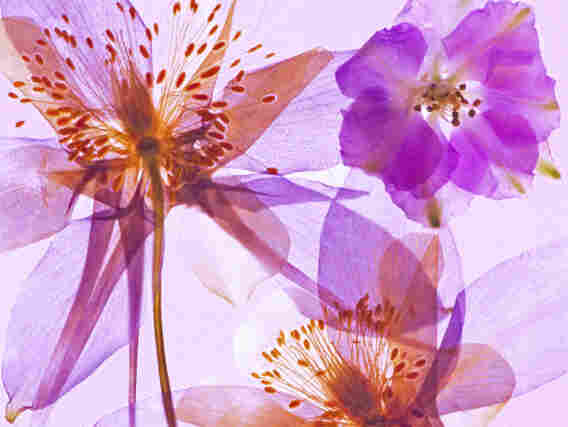 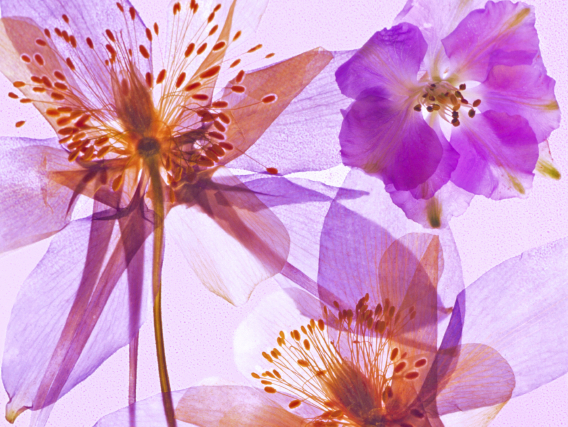 She closed the book, placed it on the table, and finally, decided to walk through the door. I must avoid slipping into banal sentimentality, Justine thought. Easy to do after pressing flowers between law books. The weight of their antiquated decisions flattened columbines, penstemon and lupine.

This time, the purple petals of a beardtongue had been put between Trans-Petroleum v. Colorado. An oil and gas case. She hadn't bothered to put wax paper or gold leafing between the pages. Let the pigment stain, she thought, make the words illegible.

Couple months from now, the ritual of preservation would begin. Trap the flower like an insect in amber. Three-milliliter pouch, lamination, trim and frame. Repeat every year, forever.

Summer tourists gathered them up, tissue paper wrapped them, shipped them, disappeared them. They never asked about supply chain, how the preserved flower became a commodity to hang on their wall, a conversation starter. Something to use in regaling their guests about the Southwest.

"Yeah," they would say. "Found this beauty near Durango. Grow all over the place."

They would be wrong. If any of the summer tourists were curious about beardtongue, she would tell them how they grew on the south-facing sides of the foothills, close to creek beds. Come in under the shadow of this red rock, she'd tell them. They would probably think she was talking about the adobe facade of her flower shop, not quoting T.S. Eliot. Certainly not of the sandstone cliffs rising over the canyons.

The Anasazi had used purple flowers as a dye in their basket weaving and clothing. They knew about supply chain under those red rocks. Kiva, mano and metate. Then they disappeared, chased by drought and famine. They, too, had walked through that door.

She used to place gold leafing on both sides of the flowers in the books. Not anymore. It was best done at the beginning of the process, when the flowers were still moist. After three months, the flakes of gold fused to the flowers, leaving a speckle of purple and blue to show through the gilded crust. Reminded her of mountain stratification. How many layers, she asked herself, will it take to bury this? Forget about him?

Kenneth's focus had been environmental law. And deception. He succeeded at both. He told her, "Keep your chin up, honey. You'll find your way."

Condescending prick. He kissed her on the forehead and ended with, "Keep on studying."

Bumper sticker slogans. That was Kenneth's forte. Similar to how tourists sought to encapsulate their mountain experience. "Mile High Club" or, "I Crossed the Continental Divide." Put it on a t-shirt and sell it for cash money. Not enough to put toward tuition, though.

Justine walked through the door to the showcase. Above the tubs of firecrackers and tulip bulbs hung the pressed flowers. Mummified remains of spring and summer, like corn cobs left behind by the Anasazi, perfectly preserved. These flowers will outlast all of my triumphs, she thought. They will outlast me.

The tour bus hadn't arrived yet. Soon they would spill through the door, asking for arrowheads and pottery shards. Their graceless bodies stepping on ghosts. She stared at the parking lot and knew. We are the outliers, disconnected from each other. Buying trinkets to give our lives significance. Photographs to preserve time and memory. Our visages flattened. Pressed into books.