Accessibility links
The Tax Man Cometh! But For Whom? It's tax week, and many Americans are likely scrambling to get their paperwork in before Tuesday's deadline. Weekends on All Things Considered takes a look at why the top 10 percent of income earners pay 70 percent of all federal income taxes. And, is it possible to live legally without paying any taxes at all? 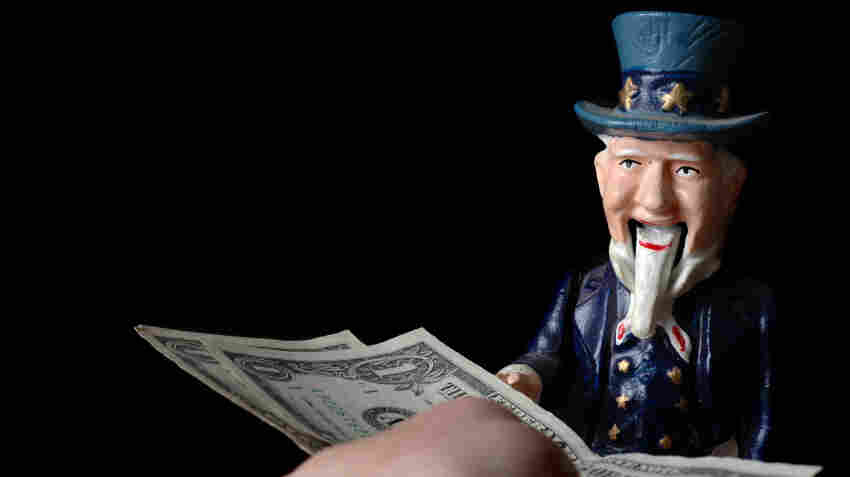 In the U.S., the top 10 percent of income earners pay 70 percent of all federal income taxes. iStockphoto.com hide caption 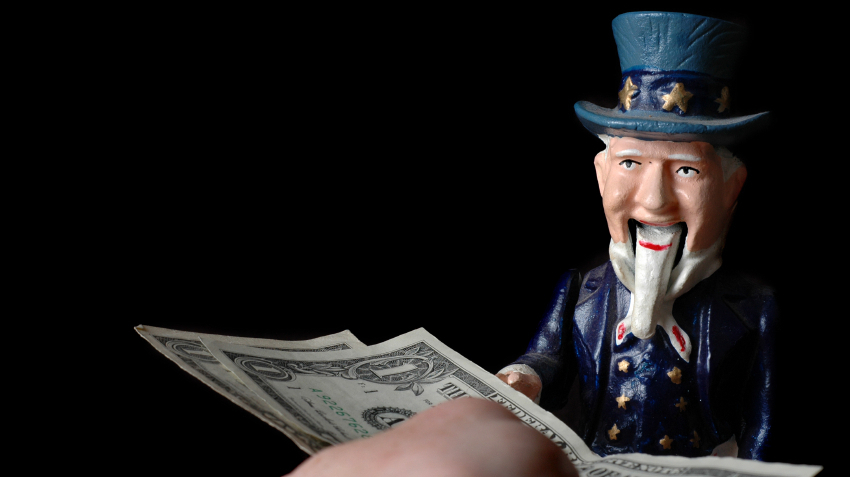 In the U.S., the top 10 percent of income earners pay 70 percent of all federal income taxes.

It's that time of year again – tax week.

With the deadline for Americans to file their income taxes looming, there's a good chance you've heard or will hear from politicians, on cable news and on talk radio about those who pay little or no taxes.

House Majority Leader Eric Cantor has said that we "have a situation in this country where you're nearing 50 percent of people who don't even pay income taxes." There are even those who say that there are nearly 50 percent of Americans who pay no taxes at all.

While it is true that about half of American households pay no federal income tax, the odds that half of Americans are paying no taxes at all are relatively low. Sales taxes, payroll taxes and state taxes make it difficult to avoid paying all taxes completely.

But is it possible?

Weekends on All Things Considered wanted to find out, so the first step was narrowing the search to a state with no sales tax: Alaska, Oregon, New Hampshire, Delaware and Montana.

John Steinhoff, a certified public accountant in Great Falls, Mont., tells host Guy Raz that it is possible to live legally and pay virtually no taxes.

"In Montana, basically, you'd have to be unemployed; so no earned wages," Steinhoff says. "You don't own any real property, you wouldn't pay any sin tax — so no liquor, tobacco, anything like that — and the state of Montana doesn't have a sales tax, so you could still buy food and supplies and not pay taxes."

Looking for a place where that would be possible led to northwestern Montana, and to the home of Lisa Block. She lives there with her husband in an area of the Kootenai National Forest.

The couple live on property owned by Block's father-in-law, so they pay no property tax. They live in the country and take their own trash to the dump, so they don't pay any municipality taxes.

Block makes a modest living running a sewing shop out of their home, but doesn't earn enough income to qualify for a federal income tax. As far as food, they have that taken care of, too.

"My husband and I, we both hunt – deer, elk [and] antelope," Block told NPR's Raz by phone. "We raise our own beef, pork and chickens, and we put in a garden every year."

It turns out, however, that even in one of the remotest parts of America, Block still pays taxes: gasoline taxes for the truck and a state self-employment tax of about $300.

It's not much, but it is certainly not nothing.

Who Does Pay A Lot? 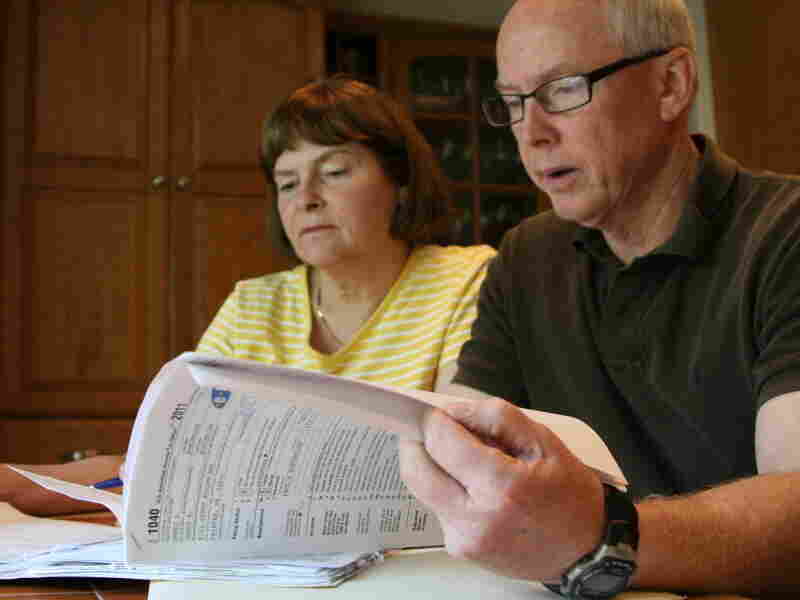 Jim and Janet Borcheller of Fairfax, Via., are in the top 10 percent of income earners. But last year, they had to withdraw money from their retirement account to pay their taxes. Brent Baughman /NPR hide caption 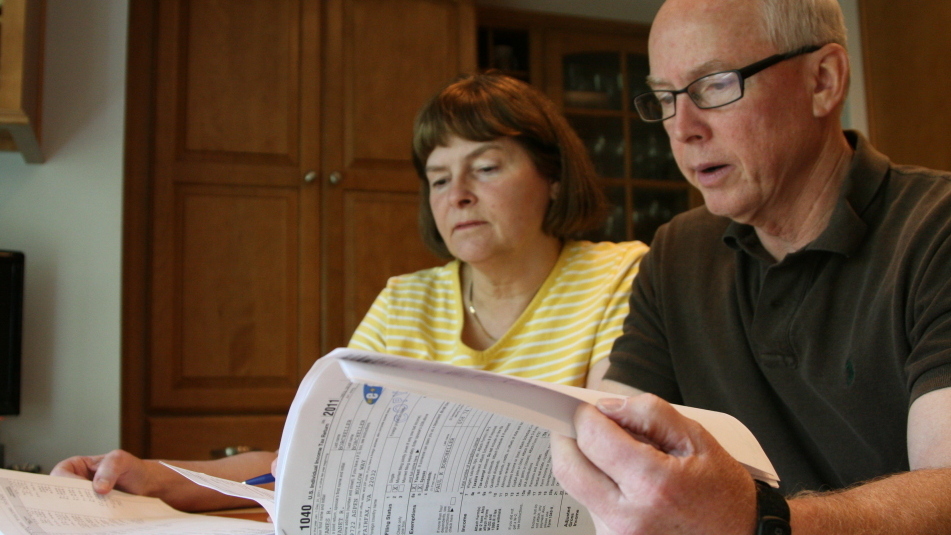 Jim and Janet Borcheller of Fairfax, Via., are in the top 10 percent of income earners. But last year, they had to withdraw money from their retirement account to pay their taxes.

Jim Borcheller, a defense contractor, is now the family's sole breadwinner. He earns about $110,000 a year. Once your household income exceeds $110,000, you are considered rich by the U.S. government and are in the top 10 percent.

Being "rich," paying your taxes should be easy, but in each of the past two years, the Borchellers have had to dip into their IRA account or savings just to pay their tax bill.

"If we're having trouble making it, I wonder how many other people are," Janet Borchellar told NPR producer Brent Baughman.

The Borchellers have put three kids through college, and between their mortgage, college loans, gas and utilities, they aren't left with a whole lot of disposable income at the end of the month.

Then there's their oldest son who, when he was 11 years old, developed a tumor around his brain stem. He still has it and lives a relatively normal life, but his medical bills are a huge expense.

"I don't expect Uncle Sam to pay for a lot of this stuff, or any of this stuff. We're doing that," says Jim Borchellar. "But ambition is good; wanting to improve yourself is good. And when the government takes away from those who are working hard to try and improve their lot to give it to those who don't work hard [or] don't work at all, that's wrong."

The Borchellers pay a much higher percentage of their income in tax than either President Obama or Republican presidential candidate Mitt Romney, or most millionaires for that matter.

"It may sound like a lot — 10 percent owe 70 percent of income tax — but the top 10 percent receive over 40 percent of the income," says Joel Slemrod, a professor of economics at the University of Michigan.

Slemrod tells NPR's Raz that most of us think it's appropriate that the fraction of income that's owed in tax is higher for higher-income people. He says the top 10 percent of income earners, like the Borchellers, pay 70 percent of income taxes because the tax code is supposed to work in a straightforward way.

"So that a millionaire not only would owe more tax than somebody who earned $50,000, but they would owe more as a percentage of their income than [that] person," Slemrod says.

In our current system, however, high-income earners who make their money through capital gains and dividends from corporations pay a much lower effective tax rate, about 15 percent, than the average person paying 25 to 35 percent, Slemrod says.

For those in Washington who want to fix the federal deficit through taxation alone, Slemrod says all of the rates would have to go up by about half: 10 percent would jump to 15 percent, and the top rate of 35 percent would become about 52 percent.

"That's only looking at this decade," he says. "Looking out at many decades ahead, we face a very large fiscal imbalance due to the promises made through Social Security and especially Medicare, [where] we're tens of trillions short."

Slemrod says most economists think we have to deal with that sooner than later, and increasing taxes should be part of that solution.

How Does The U.S. Compare?

The U.S. collects about a quarter of its gross domestic product through taxes. In countries like Denmark, Sweden, France and Belgium, it's closer to half of their GDP in taxes.

Eduarto Porter, who writes about economics for The New York Times, says that compared to many of these countries, the U.S. tax system is the most byzantine, arcane system in the developed world.

In other words, you do something to avoid a tax, get an exception or get exclusion, and this changes your desire to buy a house, to work or even invest, Porter says. This makes it harder to collect a lot of tax revenue.

"All these behavioral changes ultimately act as a drag on the economy," he says.

A more efficient system, Porter says, is one used in countries like New Zealand, Poland, Canada and Portugal – a value added. It's a federal tax on everything you buy, and it's an idea popular with many economists, Porter says, because it would collect more revenue from more people.

"States that have a much flatter tax structure ... tend to have systems of public finance of government that are much better at reducing inequality [and] at addressing the needs of the middle class and the poor than our does," he says, "because they raise much more money."

The last time an American politician proposed the idea was in 1979, when Oregon Rep. Al Ullman called for a 10 percent national sales tax. The next year, Ullman lost his bid for re-election.