Accessibility links
Spiritualized: The Man Who Fell To Earth Frontman Jason Pierce has been through a lot in the past decade: a bout of pneumonia, ongoing liver disease and a history of drug use. But in writing the band's latest album, he plays things safer. 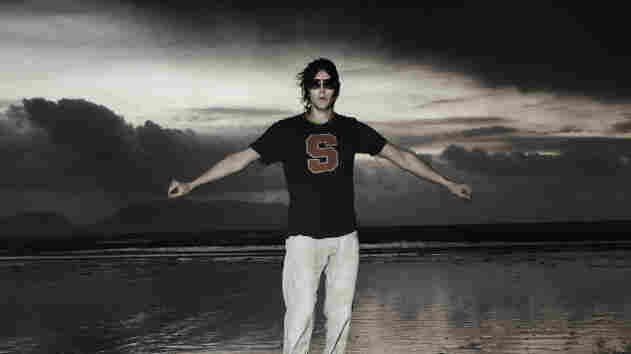 In 2001, a German nature magazine sent a crew to observe the eruption of Mount Etna, the volcano on the eastern coast of Sicily. The report they filed began with this line: "We got as close as we could for safety to the center of the eruption, and set up our equipment and our cameras. Then a man in a silver spacesuit marched up to where we were — and kept on walking."

The spaceman was Jason Pierce, leader and driving creative force of the British band Spiritualized, who was there shooting a video for the song "Out of Sight." It wasn't his first such stunt: In 1997, Spiritualized performed atop Toronto's CN Tower, 114 stories in the air.

"I think you can kind of go around and play all the normal venues — or you can look for places where, even before you start pushing the air around and making music, you're in a beautiful environment," Pierce tells NPR's David Greene.

Pierce is playing things safer these days — musically, anyway. The new album Sweet Heart Sweet Light begins with a languid instrumental, in keeping with the psychedelic sound of the band's earlier work. But 60 seconds later, a barroom riff announces the start of "Hey Jane," perhaps the peppiest, poppiest song Pierce has ever committed to tape. He says that in writing and recording the new album, he made a conscious decision to veer away from abstraction.

"[When] you make it more abstract, you move into a kind of 'emperor's new clothes' area — where it almost comes with a disclaimer that you're not hip to this music, or you're not musically bright enough to understand it," Pierce explains."I kind of wanted to make a record that didn't have any of that, that wasn't hiding behind any kind of disguise."