Accessibility links
Aboard 747, Space Shuttle Discovery To Make Final Flight The first of NASA's retired space shuttles will make its way to its new retirement home on April 17. The well-traveled orbiter will be flown low over the nation's capital before being placed on permanent display at the Smithsonian. 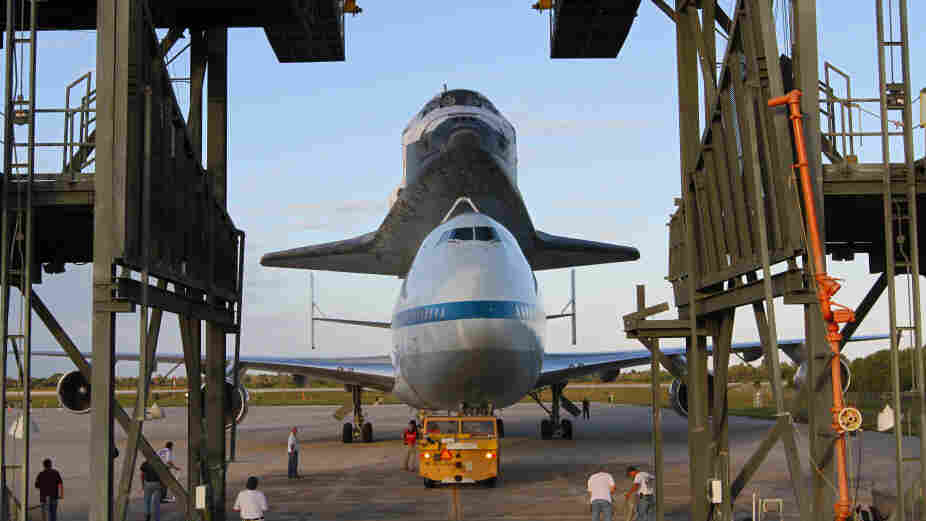 The space shuttle Discovery is loaded onto the back of a modified 747 at Kennedy Space Center on April 15. The plane will ferry the shuttle to Washington, D.C., on April 17, where it will be permanently installed at the Smithsonian National Air and Space Museum. Kim Shiflett/NASA hide caption

On Tuesday morning, space shuttle Discovery will become the first of NASA's three shuttles — plus a shuttle prototype — to travel to its new retirement home.

NASA flew its last shuttle flight in July. Since then, it's been prepping the spaceships to become museum displays. And even though the shuttles are headed to places like Los Angeles and New York rather than the space station, figuring out how to get them there has still been a major undertaking.

At daybreak, Discovery will leave Kennedy Space Center in Florida on top of a modified jumbo jet, headed for Washington, D.C. Assuming the weather cooperates, crowds are expected to gather and watch Discovery being flown near the city's famous monuments.

They'll see a sight that Jeff Moultrie first saw decades ago. He's a NASA pilot who will be flying the Boeing 747. NASA has routinely used this shuttle carrier to get its spaceships back to Florida if they had to land at a backup location. Decades ago, when the shuttles were a brand new technological marvel, and long before he ever thought he'd be working for NASA, Moultrie happened to see the shuttle carrier aircraft with the big white spaceship onboard, over Huntsville, Ala.

"It was sort of an image that I'll probably never forget. And so I think it's probably the same with most of the folks who are going to be seeing this thing overhead the nation's capital," says Moultrie.

Ready For Retirement, Shuttles Get A Deep Clean

He has mixed feelings about the upcoming flights to take shuttles to museums.

"On the one hand we're happy to be doing what we're doing. On the other hand, we're sort of sad to be seeing it going away," Moultrie says.

Discovery will land at the Dulles International Airport outside Washington, right next to the Steven F. Udvar-Hazy Center of the Smithsonian's National Air and Space Museum. For years, that facility, full of historic aircraft, has held Enterprise — a prototype shuttle that never flew in space. It will get swapped out for Discovery, since the museum wants a shuttle that was in orbit.

Then, Enterprise heads for its new home. Its turn on NASA's special 747 will come next week, when it flies to New York City.

The destination is the Intrepid Sea, Air & Space Museum, an aircraft carrier parked on the West Side of Manhattan. To get there from the airport, Enterprise will have to float up the Hudson River on a barge.

"She will be visible. She's not going to be shrink-wrapped or covered. So when she floats up the river, it's going to be quite a sight," says Susan Marenoff-Zausner, president of the Intrepid Museum, who says Enterprise will float by the Statue of Liberty and Ground Zero.

That river trip should happen in June, but the exact timing depends on the tides.

"You don't want to ground the barge, so you have to wait for a certain level of tide, so that when you're placing the weight on the barge that the barge remains floating," explains Marenoff-Zausner. "And then the bridges have a certain clearance, and so we want to wait for the lowest tide to make sure that the shuttle safely clears the bottom of the bridges that we'll be sailing under."

A crane will haul Enterprise to the aircraft carrier's flight deck, where a temporary structure will quickly be erected around it. The museum is still considering its options for permanent display.

Space shuttle Endeavour will be the next to head out, probably in September or October. It's going to the California Science Center in Los Angeles, which has actually owned Endeavour since last fall.

There, it will get loaded onto a huge vehicle normally used to transport construction equipment. And then Endeavour will travel about 12 miles through the streets of Los Angeles.

"We've had people from throughout the country and the world saying, 'Tell us when it is, we really want to be there and see it,' because it is the only time that you will ever be able to see a space shuttle traveling through the streets of a major urban area," says Rudolph.

Endeavour will spend some time in a temporary building. The center ultimately wants to display Endeavour upright, like it's on the launchpad, but doing that for the long term will involve a lot of structural engineering, especially since it will have to be earthquake-proof.

In November, NASA will say goodbye to its last shuttle, Atlantis. It will have the shortest distance to travel. It's just going next door, to the Kennedy Space Center's Visitor Center Complex. A new building is already under construction. Atlantis will be moved inside, and then the walls will be closed around it.

"Right next to where my office is we have a tremendous amount of construction ongoing. We just poured lots and lots of concrete in the last couple of weeks," says Bill Moore, chief operating officer at the visitors complex, which plans to display the shuttle with its payload bay doors open, as if it were in orbit.

At none of the museums will people be allowed to actually enter the shuttles. The spaceship's hatch and cockpit are too small for that, says Rudolph, who notes, "there's just no really viable way to put millions of people a year through that thing without destroying it."