Accessibility links
House Investigator Issa Has Faced Allegations As Well The man driving the investigation into the GSA is Republican Darrell Issa. He took the top seat on the House oversight committee after the GOP won the majority. Over the past year and a half, Issa has led several splashy investigations. But he's also been dogged by allegations of his own. 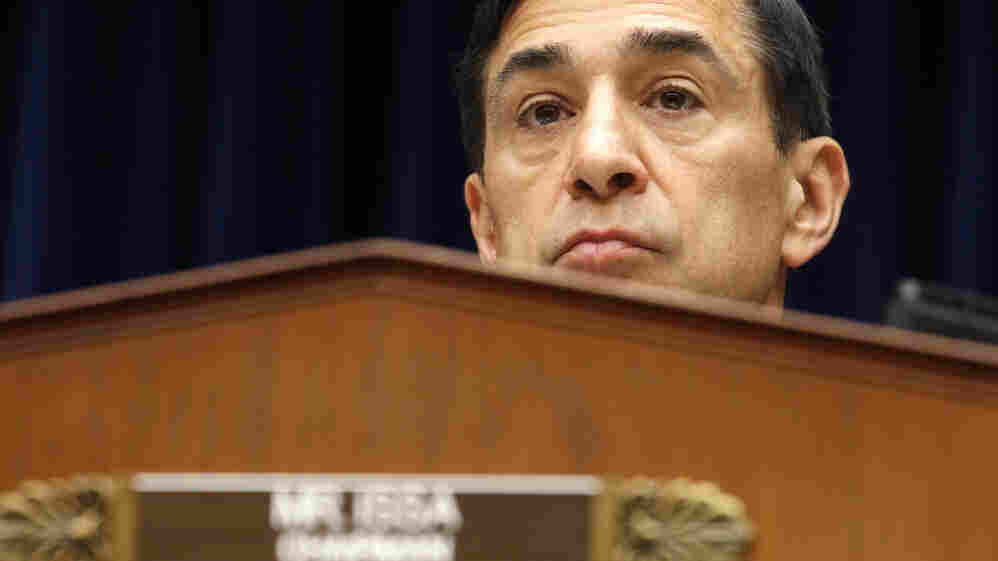 The man driving the investigation into the General Services Administration, California Republican Rep. Darrell Issa, took the top seat on the House Oversight and Government Reform Committee after the GOP won a majority in 2010.

Issa has led several splashy investigations since. But he's also been dogged by allegations of his own.

Issa has made news in recent months by threatening to subpoena Attorney General Eric Holder, and by calling a panel of only men to talk about women's contraception.

Issa made his fortune building and selling Viper car alarms. He is the wealthiest member of Congress, worth as much as $450 million. In fact, it's Issa's voice on the popular alarm's signature warning to would-be thieves: "Protected by Viper. Stand back."

What's less well known is how Issa got into car alarms in the first place.

"For years I used to tell everyone that I went into it because my brother was a car thief. Then they found out when I ran for office my brother did spend time in prison as a car thief, and it ruined the whole joke I'd had for 20 years in business," Issa said during an interview with WhoRunsGov.

Issa himself was accused several times of auto theft. In the early 1970s, he and his brother were arrested after police suspected them of stealing a Maserati sports car from a dealership in Cleveland. Issa says the police mistook his identity, and the charges were later dismissed.

Another time, Issa was arrested and eventually pleaded guilty to carrying a concealed weapon. Police found a handgun and a tear-gas gun — plus ammunition for both — in Issa's glove compartment.

Questions In The Past

These stories first arose when Issa ran for the Senate in 1998. An investigative reporter named Lance Williams was looking into the then-candidate's biography.

"He had been a soldier, and he claimed that he was part of an elite bomb detecting unit that guarded President Nixon at the 1971 World Series," said Williams.

Williams called up the Nixon Presidential Library, and was told that Nixon hadn't gone to any World Series games that year. Then Williams looked into Issa's purportedly stellar career in the Army.

"The biography that he was providing the press in the context of his campaign was all wrong. He had a bad conduct rating. He was demoted, and a fellow soldier accused him of stealing his car," said Williams.

Issa eventually took over the company that built car alarms.

Issa had a warehouse full of electronics that, one night in 1982, caught fire. Investigators later found "suspicious burn patterns," Lizza reported, and found that Issa had done some odd things.

A co-worker claimed that before the fire, Issa had put important electronic prototypes in a fireproof box, and that he'd removed the business's computer and financial files from the building. Investigators also found that less than three weeks before the blaze, Issa had increased the company's fire insurance from $100,000 to more than $400,000.

"So you add the more than quadrupling of the insurance along with the taking the computer and putting the other stuff in a fireproof box, and you can see why both the arson investigators and the insurance investigators pointed a finger, you know, at Issa after this fire," said Lizza.

Issa said he had nothing to do with the fire, but the insurance company refused to pay the claim. The two later settled out of court.

It was in part because of these allegations that Issa lost his Senate bid in 1998. He went on to win his House seat, he worked to recall the governor of California, and now he chairs the powerful House Oversight and Government Reform Committee.

Issa would not talk to NPR about this, but he has told several news outlets over the years that he's surprised the allegations from his past continue to dog him.