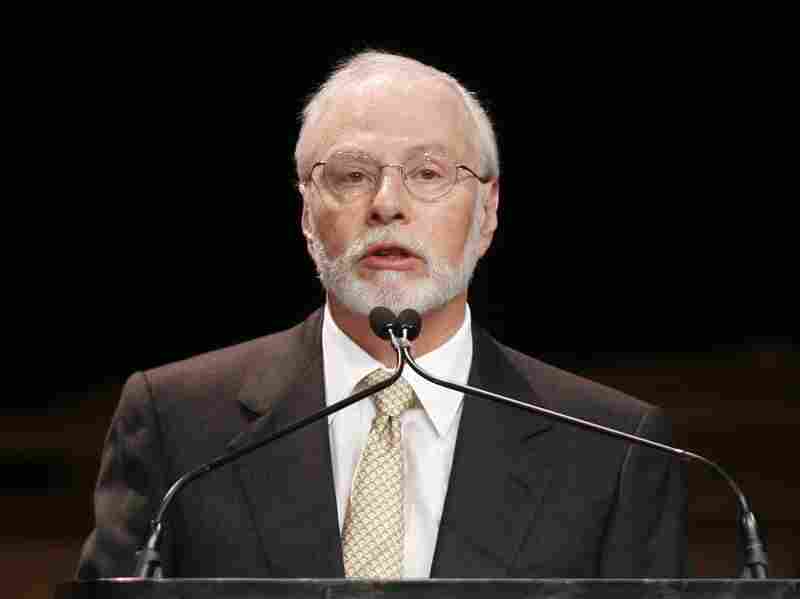 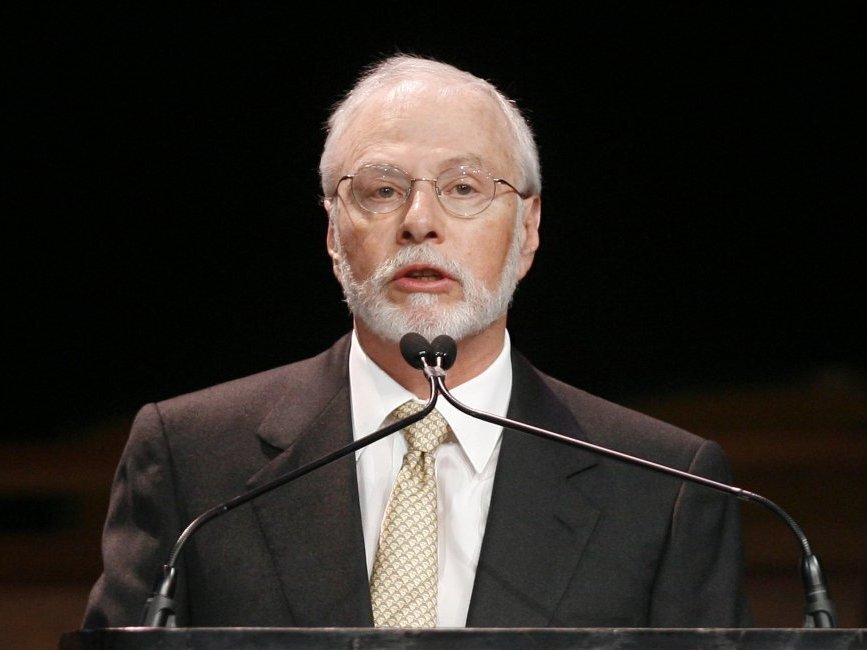 When it comes to campaign money, there's one industry GOP presidential candidate Mitt Romney can count on: finance.

Some of the single largest checks to the pro-Romney superPAC Restore Our Future come from hedge fund managers. People at securities and investment firms have contributed more than $16 million.

Paul Singer, the man behind the hedge fund Elliott Management, has contributed $1 million.

As of Dec. 31, Elliott Management had $19.2 billion in assets, making it one of the nation's largest hedge funds.

It is also quite successful, says finance journalist Michelle Celarier, who recently wrote a profile of Singer in Fortune magazine. She says that over Elliott's 35-year history, it has averaged 14 percent annual returns.

"Fourteen percent is more than double what the S&P has done during that time. So, you know, Elliott is highly regarded in the investment community," Celarier says.

Elliott Management makes its money through a variety of investments, but it is best known for investing in distressed or bankrupt companies and distressed countries. This is sometimes called "vulture investing." Elliott Management is a large holder of Lehman Brothers claims, and was involved in the bankruptcies of auto firms Chrysler and Delphi.

Celarier says Elliott has a reputation for aggressively pursuing payment.

"Their strategies are so fearsome, and they're being copied by other people too, because people are studying their legal tactics 'cause they've had such an influence," Celarier says.

Beyond his hedge fund, Singer has long been an influential GOP money man, making substantial campaign contributions. Within GOP politics, he's considered a coveted bundler, bringing other donors along with him to support a particular candidate.

He's joked that in some circles he's known as a "fundraising terrorist" because of his persistence. New Jersey Gov. Chris Christie was Singer's first choice for the Republican presidential nod, but when Christie opted not to run, Singer threw his money and his Rolodex behind Romney.

A Task Of 'Keen Importance'

In a note to his network of donors last October, reviewed by NPR, Singer said he was supporting Romney because of his policy agenda and because he believed Romney could defeat President Obama.

"Mitt Romney can defeat the incumbent president, a task that is a matter of urgency to me and of keen importance to the country," Singer wrote, adding, "I will work hard to help advance his endeavor." 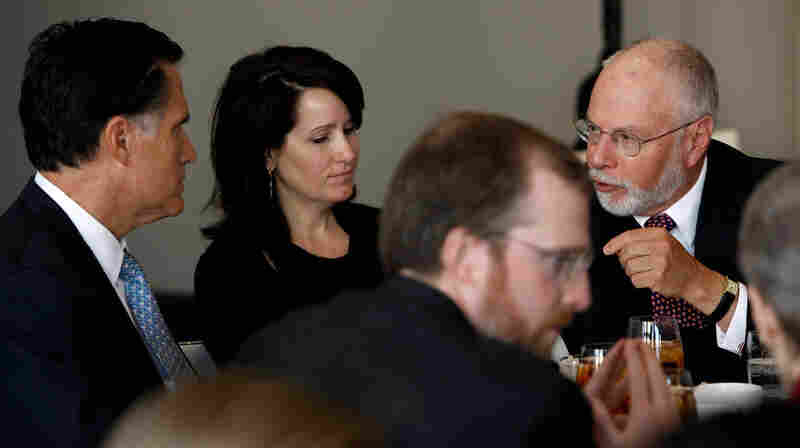 Paul Singer (right) speaks with Mitt Romney during a forum of the Foreign Policy Initiative in Washington in 2009. Chip Somodevilla/Getty Images hide caption 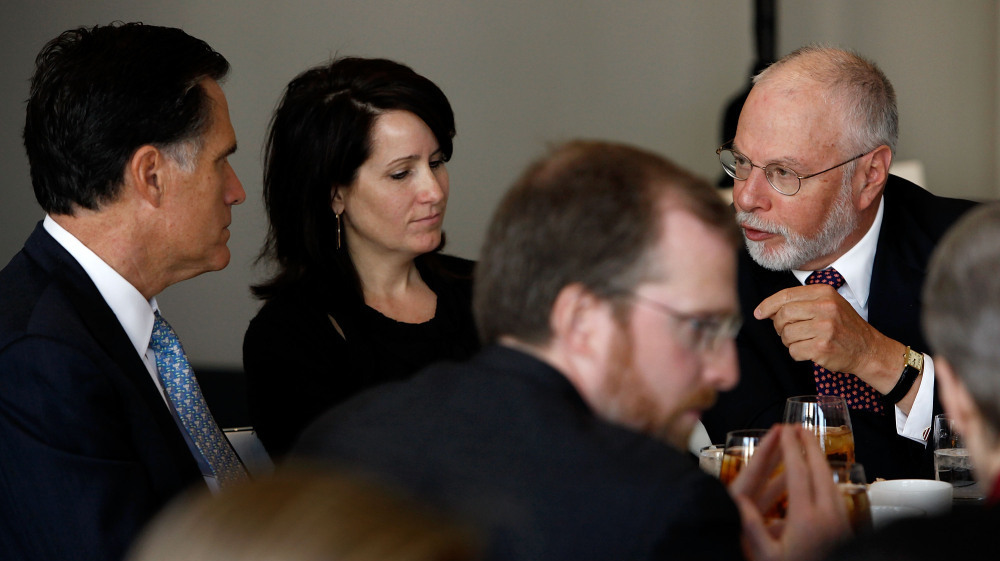 Paul Singer (right) speaks with Mitt Romney during a forum of the Foreign Policy Initiative in Washington in 2009.

Singer wouldn't agree to an interview for this story and, in fact, rarely does interviews.

But one area where we know he and the GOP front-runner have some agreement is the Dodd-Frank Wall Street Reform and Consumer Protection Act. Romney wants to repeal it. Let's just say Singer isn't a fan, either.

At a panel discussion last year sponsored by the Federalist Society, he remarked: "It's absurd. It's stupid."

Singer was talking about the provision of the law that aims to end the phenomenon of "too big to fail" firms by creating a new way to wind down companies deemed systemically important. He says the law actually preserves "too big to fail" rather than ending it, and could make the whole financial system even less stable.

"We'll only know the first time it's used, but we feel very, very pessimistic about the cascading effect of the use of Dodd-Frank and the fear of Dodd-Frank," Singer said.

But this is by no means the only issue driving his support for Romney, or even the most significant.

While Singer has long been active in GOP politics, he has also been deeply involved in another cause — gay marriage. His son and son-in-law were married in Massachusetts in 2009. And over the course of many years, Singer has given more than $8.5 million to the cause.

"I believe a generation from now, gay marriage will be seen as a profoundly traditionalizing act. It will have channeled love into the most powerful social institution on earth: marriage itself," said Singer in a video posted on the gay news blog Towleroad.

He was speaking at a 2010 fundraiser for the American Foundation for Equal Rights. Chad Griffin, a political strategist and board president for the group, says Singer supports gay marriage not in spite of being a Republican, but because he is a Republican.

"He is a real force in the fight for full equality in this country," Griffin says.

Griffin says Singer approaches the issue from a libertarian point of view, and having him onboard is a huge help to the cause.

"Having Paul, who is one of the largest donors and a prominent Republican, articulating the views of marriage equality and why that party and those candidates should support this issue is something that's absolutely necessary. And Paul gives us a seat at that table," said Griffin.

Griffin says Singer was instrumental in building Republican support for the New York state gay marriage law. Then he went out and raised more than $1 million for the re-election campaigns of the Republicans who supported it.

Romney has long opposed gay marriage — as have countless other candidates Singer has supported over the years. But Griffin says he has no doubt Singer makes his views on marriage equality known to any and all candidates he supports.