Accessibility links
Democrat Bob Kerrey Faces Uphill Race In Nebraska The former governor and two-term senator is vying for the Senate seat left open by retiring Democrat Ben Nelson. But he's been out of Nebraska for more than a decade, and Republicans now outnumber Democrats in the state by a wide margin. 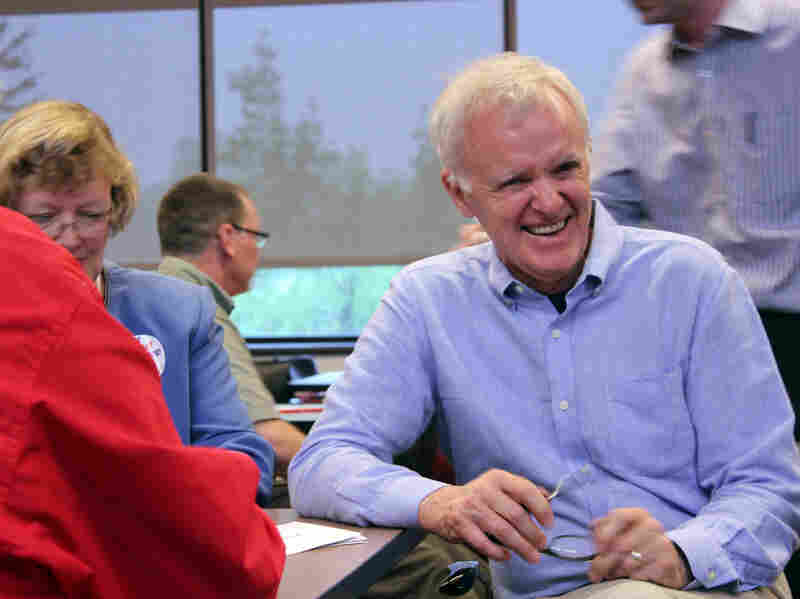 Former Nebraska Sen. Bob Kerrey campaigns at a Democratic caucus site on April 14 at Bellevue University in Bellevue, Neb. Kerrey has decided to run again for his old seat in the U.S. Senate. Clay Masters for NPR hide caption 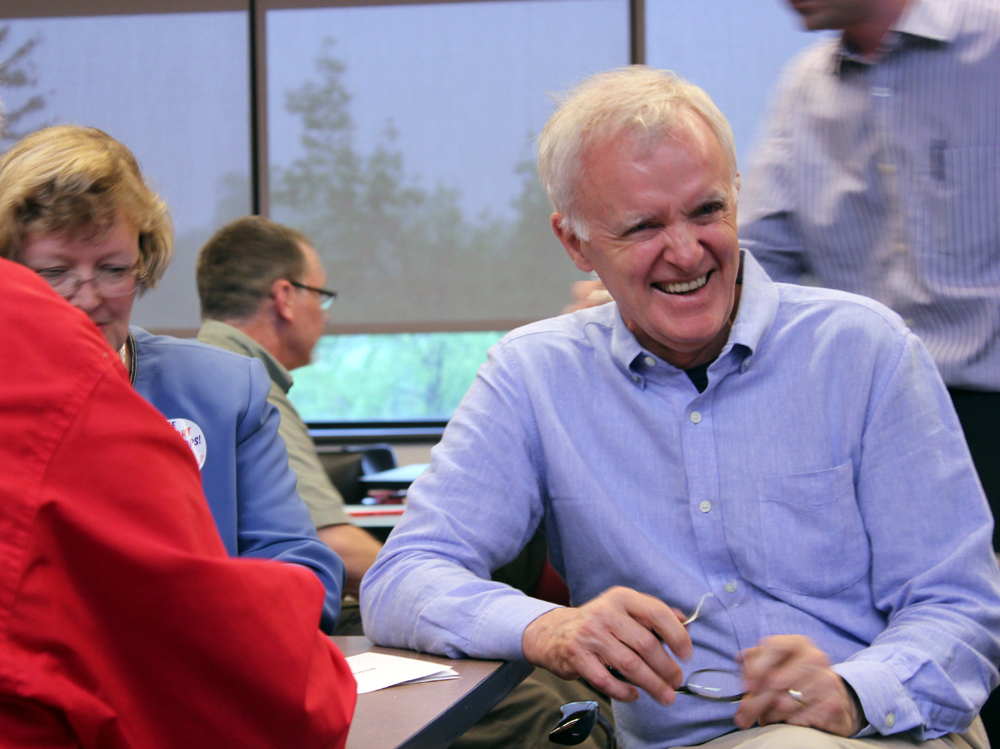 Former Nebraska Sen. Bob Kerrey campaigns at a Democratic caucus site on April 14 at Bellevue University in Bellevue, Neb. Kerrey has decided to run again for his old seat in the U.S. Senate.

Former Nebraska Gov. and two-term Sen. Bob Kerrey, who faces long odds in reclaiming the seat left open by retiring Democratic Sen. Ben Nelson, is in his home state trying to get his old job back.

After a full of morning of shaking hands, smiling and trying to win over voters, Kerrey settles on lunch at the Taqueria Tijuana in south Omaha.

After lunch, he takes off walking down 24th Street, telling his staffers to catch up with him. He says things are different now from when he first sought public office in 1982.

"It's the theory of quantum mechanics: Everything looks different depending on where you stand," he says. "So the world looks different to me at 68 than it does when I was at 38, or 48, even 58. I know what the Senate's like. I know what's there. I know it's hard, but I also know how to do the work."

The latest polls show Kerrey trailing not one, not two, but the top three GOP contenders by double digits. But sitting shotgun in a staffer's SUV, Kerrey says he's not worried about losing an election.

"What I was worried about is not making the argument," he says. "Not being willing to come and make the argument to Nebraskans about what I think this country ought to do."

Kerrey cites his time on the 9/11 Commission and serving as a Navy SEAL during Vietnam as experiences that give him solid national security chops. He promises, if elected, to work across party lines. But it's been 11 years since he served as senator and almost three decades since he was elected governor; plus he's been out of the state for a long time.

"He as just as much of a Nebraskan as somebody that's lived here their whole life," says Patrick McNamara, who served in the Air Force for 24 years and was gone from the state for 20 of those years.

"I still always felt like I was a Nebraskan and I could always come home," McNamara says. "And I think Bob Kerrey feels that way and is going to sell that also."

When Kerrey last ran for office, the voter registration numbers were much more competitive between Republicans and Democrats. And now Republicans outnumber Democrats by about 169,000, which in a state of, you know, just north of a million people is a lot.

"Would I just stay home and not vote for him? God, that's tough. That's like the lesser of two evils," she says.

Part of Kerrey's stump speech is acknowledging the fact that he's been out of the state for more than a decade. "Even people who say they aren't going to vote for me say it's nice to have you back," he said recently to laughter.

But opposition groups are targeting Kerrey's time out of the state, and his political record.

"Bob Kerrey is moving back to Nebraska," says an ad from the Americans for Prosperity, a group backed by conservative businessmen Charles and David Koch. "And he wants to bring his liberal agenda to our Nebraska home."

Mike Wagner, political science professor at the University of Nebraska, says given Kerrey's time away from the state, his chances in November are "very slim."

"When Kerrey last ran for office, the voter registration numbers were much more competitive between Republicans and Democrats," he says. "And now Republicans outnumber Democrats by about 169,000, which in a state of, you know, just north of a million people is a lot."

Kerrey says party registration is the least important characteristic of a state, that the values are exactly the same as when he was living in Nebraska.

"The fact it's a difficult and daunting challenge is not intimidating to me," he says.

And if he loses, Kerrey says for him personally it's not a catastrophe.