Accessibility links
Are Obama And Romney The Same Guy? Here's something you won't hear from the rival campaigns of President Obama and Republican Mitt Romney: Despite their obvious differences, they actually have a lot in common. A dozen things, at least. Here's a list. 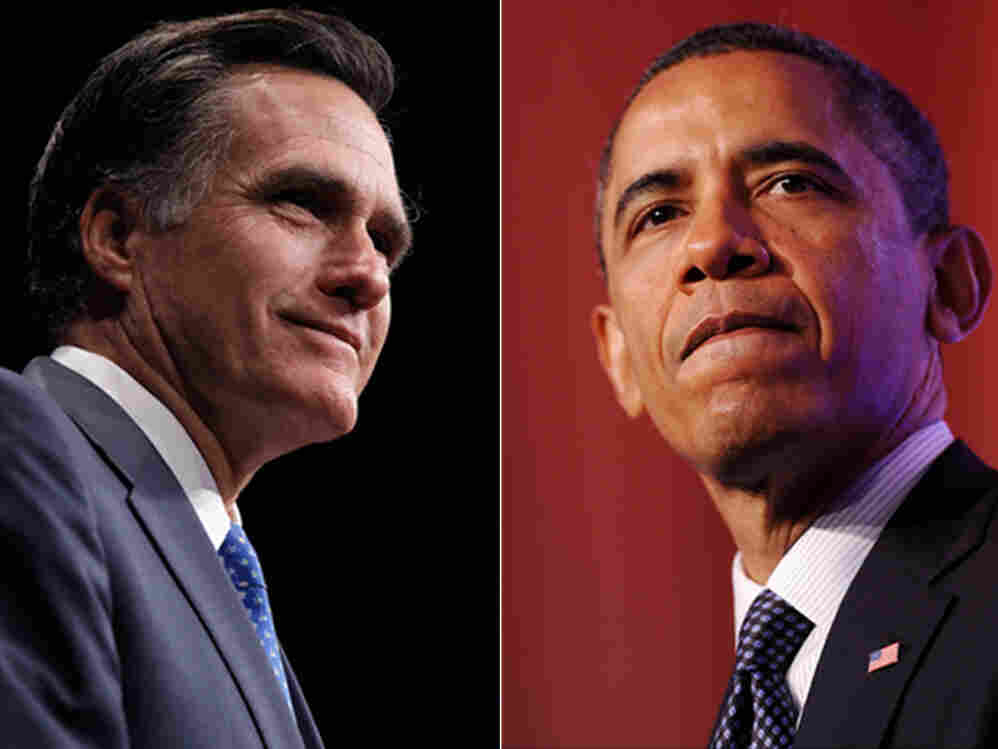 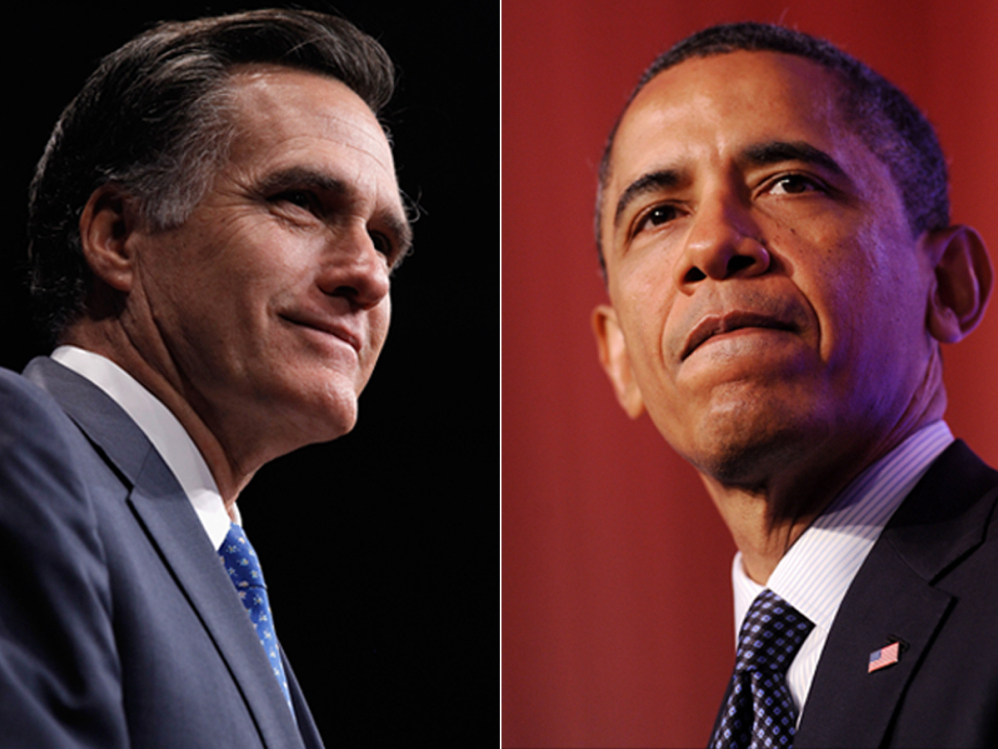 Former Massachusetts Gov. Mitt Romney and President Obama will spend the next six months highlighting their differences. But they also share some striking similarities.

Barack Obama and Mitt Romney just may be the same person. Think about it. Have you ever seen the two of them in the same limo?

All right. Of course, the pair of politicians who will in all likelihood be the major party nominees for the 2012 presidential election have their differences. Republican Romney, for instance, has been a governor and chairman of the Olympics; Democrat Obama has not. Obama, on the other hand, has been a senator and a president. Romney has not.

The two men do have different skin colors and they were raised with different religious beliefs. But we are here to explore their likenesses. Of which there are so many — major and minor — that political wags have referred to the two with mashed-up monikers, such as Barack Oromney, Baromney Obamitt and just plain Obomney.

President Obama, speaking at the recent White House Correspondents Association dinner in Washington, joked about his similarities with Romney: "He and I actually have a lot in common," Obama said. "We both think of our wives as our better halves. And polls show, to a alarmingly insulting extent, the American people agree."

Other people have noticed parallelisms between the pols. From the left, billionaire political activist George Soros told Reuters in January, "Between Romney and Obama, there isn't all that much difference."

From the right, Newt Gingrich agreed with Soros — which does not happen often. Gingrich, putting himself forward as different from Romney, told ABC News in January that Obama and Romney are "the same people." There are "a lot of parallels between these two guys," Gingrich added, pointing out that they both receive massive funding from Wall Street investors and share similar views on health care issues.

Both Obama and Romney "are very successful guys who kind of figured it out," says Mac McCorkle, who teaches the politics of public policy at Duke University. "They both have faced major challenges and they both have met those challenges."

And both Obama and Romney come across as cool and somewhat aloof. Larry Sabato, director of the Center for Politics at the University of Virginia, says, "I've joked that we may finally have found a political solution to global warming. Let these two campaign incessantly for six months and we'll lower the temperature by a few degrees."

Tale Of The Tape

Arguably, Obama and Romney see the world pretty much the same way — in very many ways. They have at least a dozen data points in common:

1) Neither man served in the armed forces. This would be the first election without a veteran representing a major party in the race since 1944.

3) Both men operate from out-of-the-norm religious backgrounds. Obama, the Christian son of a Muslim father, says that his faith guides his decision-making; Romney is the Mormon son of a Mormon father. Both religious upbringings can elicit prejudice.

4) Both men earned degrees at Harvard University. Romney spent four years among the ivied towers, graduating in 1975 with a joint degree in law and business. Obama spent three years in Cambridge, graduating from Harvard Law School in 1991.

5) Both men worked in the financial sector. In 1983, Obama took a job at Business International Corp., a New York-based multinational business counseling firm, as a researcher in the financial services division. "He wasn't there long — only about a year," NPR's Scott Horsley reported in 2008. "But the job at Business International Corp. provided a crash course in market economics." Both politicians have been heavily funded by Goldman Sachs, Bloomberg reports.

Romney migrated from the banks of the Charles River to the banking world of Bain Capital, a private equity firm. "What Bain Capital did — and was among the first, if not the first, to do it — was to look at the operations before buying the company, as well as after," Romney told NPR's Ari Shapiro in 2011, "and try to figure out, how can we make it better and then help the management team to improve the company."

6) Both served, for a time, as advisers to their communities: Obama as a community organizer in Chicago; Romney as a bishop — a spiritual lay leader — in the Boston area.

8) Both men have championed comprehensive health care initiatives. Romney, when he was governor of Massachusetts and Obama as president. "Romneycare and Obamacare are essentially the same," Gingrich told ABC News.

9) Both Obama and Romney stay fit, dress sharply and look vaguely out of sync when wearing blue jeans.

10) Both occasionally laugh uncomfortably at their own humor.

11) Both have been known to lapse into song during public speaking.

12) Both are political pragmatists. "This presidential election tells us something unexpected about American politics," writes presidential historian Julian Zelizer on CNN.com. "For all the talk about polarization and discord in Washington, it appears that both parties will have pragmatic problem-solvers at the top of their tickets."

The Party Trumps All

Watching the 2012 slates materialize — bringing together two similar political figures — reminds Sabato of certain similarities between the candidates in the election of 2000. George W. Bush and Al Gore "were crown princes who had gotten as far as they did because of their fathers' successes," Sabato says. "So the parallels between Obama and Romney aren't that unusual in American politics." (Which may raise another question about the type of person who runs — and whom we nominate — for president.)

But what is different this time, Sabato says, is the political climate and the potently partisan atmosphere. The major distinction between Obama and Romney is where their support comes from — their parties.

"What they don't share politically — their party — trumps all similarities," Sabato says. "We live in a highly polarized era, and in the modern age at least, Democrats and Republicans have never had less in common on politics and policy."

The fact that Obama and Romney, left to their own devices, might well meet in the middle and find common ground, Sabato says, "is literally irrelevant. Their party bases will not permit them to do so, and their own partisan activists will go after them hard if they try to compromise too much. Or maybe at all."

On Monday's Morning Edition, NPR will air the first in its series, "Parallel Lives," comparing President Obama and Mitt Romney.