Accessibility links
In Noisy Digital Era, 'Elegant' Internet Still Thrives Before Facebook and MySpace transformed how we interact online, there was another kind of Internet: the SDF network, made up of users connecting via phone lines and code. Around the world, 30,000 computing enthusiasts still use that network today. 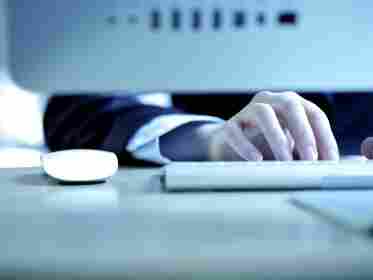 Many computer users today use tools like Facebook MySpace to connect online. But some computer hobbyists still use pre-Web technologies to interact. iStockphoto.com hide caption

Before Facebook and MySpace transformed how we interact virtually, there was another kind of Internet — a 1980s network, where users connected via phone lines and communicated through simple lines of text.

And while that may sound outdated, that version of the Internet is still very much alive.

Pat McNameeking, a college student in Concord, N.H., is one champion of this throwback social network known as SDF, or Super Dimensional Fortress.

McNameeking, who goes by the handle Bulywif, connects to the Internet via an Ethernet cable threaded into his parents' basement. Telephone and cable wires are tangled around his setup.

Perched over a small laptop, McNameeking, 23, logs on. SDF is reminiscent of Facebook, Gmail and an online gaming site all rolled into one. But unlike any of those networks, there are no videos, pictures or even ads on the screen.

"This is a lot more elegant, I think," says McNameeking. "This is just text. There is no mouse; it's just all in a command line. Using a mouse and having windows and dragging stuff around is distracting," he says.

The Backbone Of The Early Internet

SDF, known as a public access UNIX system, is the Internet for people who actually understand how the Internet works.

Instead of websites, users are accessing a shared operating system. They can chat, email and post within the system, but only by typing in commands.

SDF has been around since 1987 and currently has about 30,000 members. But at one time, this type of computing was the Internet.

Rod Fleischman, a computer scientist and Internet expert, says that these types of systems were once extremely popular. "They were the alternative to AOL and CompuServe back in the early days," Fleischman says. "But nowadays, they are ... very obscure."

Most of that business has since migrated onto the mainstream Web — along with more mainstream — and legal — social networking activities.

When Virtual Friends Were Real Friends

Today, SDF is primarily just a hangout for — and community of — computer hobbyists from around the globe.

That's another difference from the 1980s, when SDF users still connected via land-line phones. They would usually only communicate with users with local phone numbers, to avoid paying long distance charges.

Because users were typically in the same area code, it was common for them to get together in person. Online friends actually became real friends.

Today, the global SDF network makes that more difficult, but users still occasionally meet up in person. McNameeking, for one, likes the idea.

"I think that would be really cool," he says. "I haven't come across anyone in Concord, N.H. If I did, I would love to meet up with them."

Fleischman says this type of computing will never completely fade away. There will always be users, he says, who are willing to trade the bells and whistles of websites for the simple elegance of code.

But because navigating SDF requires some serious computer know-how, it is likely to stay relegated to the Internet's basement.