Accessibility links
Dick Clark, 'Bandstand' Host, Dies At 82 For more than 50 years, "the world's oldest teenager" was one of pop culture's most familiar figures.

Dick Clark, affectionately known as the "world's oldest teenager," has died. He was 82, and had suffered a heart attack while in a Santa Monica hospital for an outpatient procedure.

Richard Wagstaff Clark became a national icon with American Bandstand in the 1950s, hosting the show for more than 30 years. Clark also hosted the annual New Year's Eve special for ABC for decades. He weathered scandals, hosted game shows and renewed his Bandstand fame with a new generation by producing the nostalgic TV drama American Dreams. 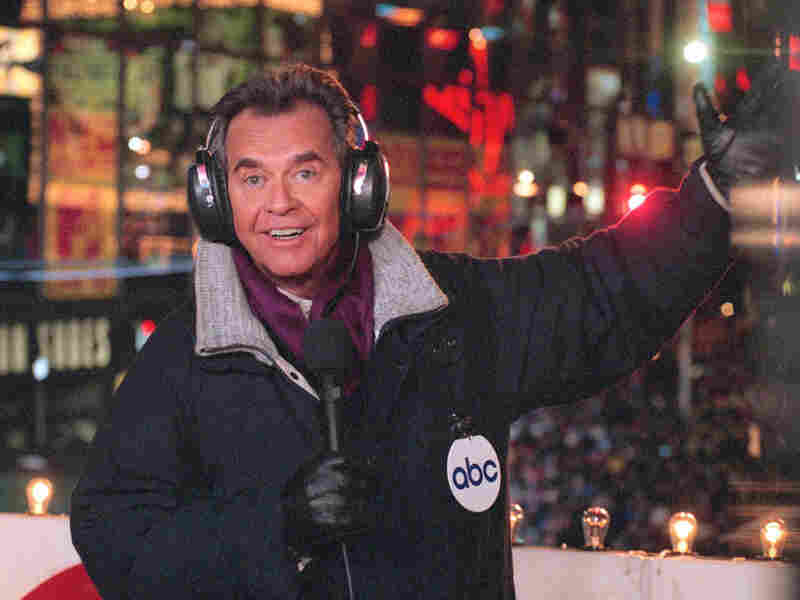 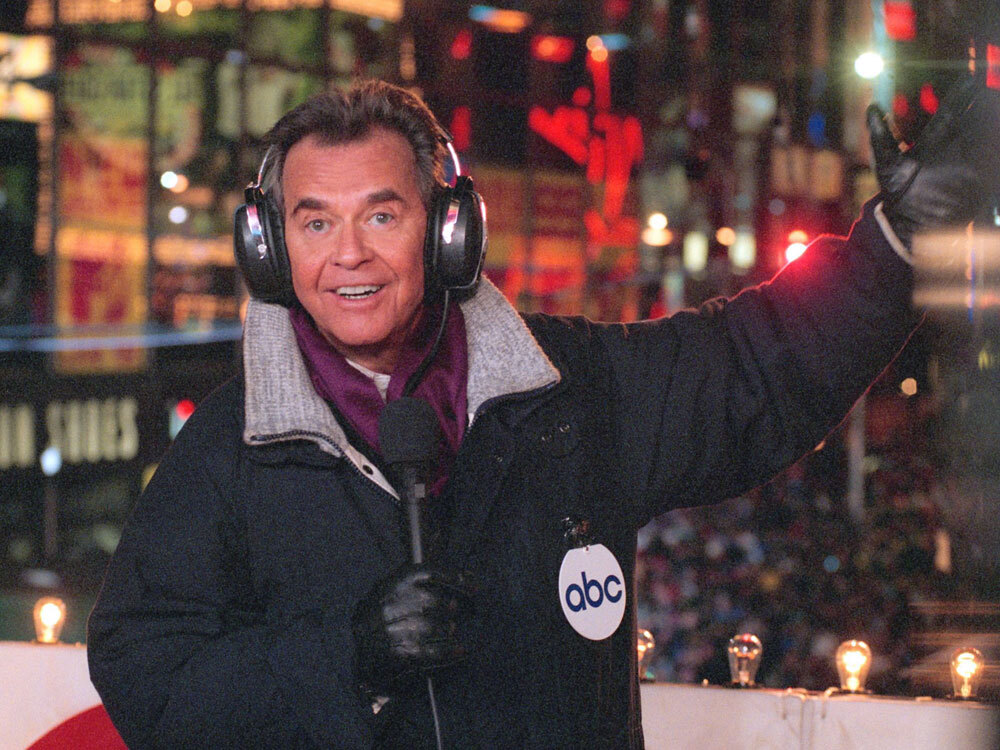 Dick Clark brought in the New Year from Times Square for over three decades.

Clark's emergence on the national stage owed much to his being in the right place at the right time. After a childhood immersed in the world of radio — his father worked as a station manager at WRUN in Utica, N.Y. — Clark became an announcer with WFIL radio in Philadelphia and hosted the local show Bandstand.

Four years into his time at WFIL, Clark got his big break. A Philadelphia TV host on a local teen dance program called American Bandstand had been accused of sexual impropriety with some of the teenage dancers and arrested for drunken driving. The station faced enormous pressure to cancel its most lucrative program, and the producers needed a new host.

Music historian John Jackson says Dick Clark "had a clean-cut, impeccable image. He had a boyish look about him, an innocent look." In other words, he was the ideal candidate.

At the time, rock 'n' roll still carried an air of danger and controversy, but as host of American Bandstand, Clark would make the scandalous look tame. He changed American pop culture by creating an image of wholesome American teen life to which bubbly pop music was fundamental.

Clark was one of the first to take kids seriously as consumers and use the music they liked as a marketing tool. Today the kids-as-consumers concept drives much of television programming, so it's hard to imagine the kind of resistance Clark met from ABC studio executives when he first proposed that Bandstand go national.

"He was laughed out of the studio," says Jackson. "They said to him, 'Who wants to watch kids dancing in Philadelphia?' "

As it turned out, a lot of people did.

American Bandstand premiered nationally on Aug. 5, 1957, with Billy Williams singing "I'm Gonna Sit Right Down and Write Myself a Letter." The show was an instant success, and in addition to bailing out the struggling ABC, it helped sell hundreds of thousands of records. 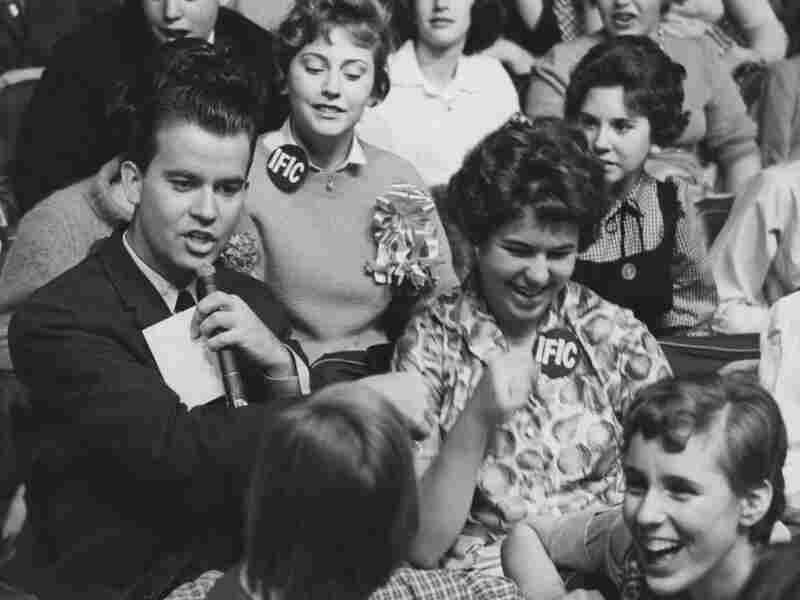 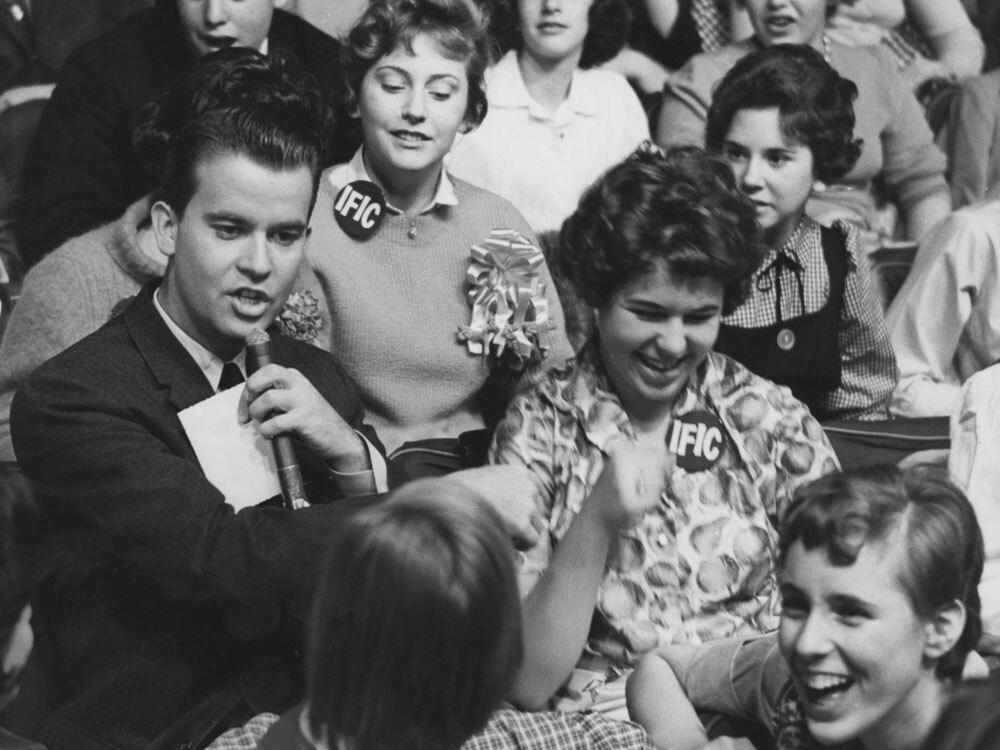 It's difficult to overestimate Bandstand's influence on the music industry — and as a cultural bellwether.

"We got serviced with the latest releases," Clark said in a 1998 NPR interview, "and we had a huge teen audience watching who were trendsetters. So radio-station program directors used to assign their assistants to watch the program and copy down what we played. And within a day it was being played everywhere."

Rocker Brenda Lee says the Bandstand experience was transformative for musicians like her.

"If you were on the Clark show with a new record, it was almost like Dick Clark giving his blessings and saying, 'This record is gonna be a hit,' " she told NPR in 1998.

Among those transformed were musicians Fabian, Frankie Avalon and Freddie Cannon — all of whom Clark and his show made into teen idols.

"People today can't imagine how much power he had. In the 1950s, when Dick Clark started, he was the only national disc jockey," says historian Jackson, who wrote a history of American Bandstand.

Using the earnings from his fabulous success, Clark began to acquire record companies — a move that got him into trouble in 1959 when Congress began to investigate "payola," or the exchanging of bribes for record promotion. Clark, it turned out, was hyping records that he secretly owned.

When the dust settled, Clark had to choose between his music-industry interests and hosting American Bandstand. Needless to say, Bandstand won.

Clark would continue to diversify his portfolio, though, buying radio stations and oil wells — and pouring money into TV. He produced and hosted game shows like The $10,000 Pyramid and TV's Bloopers and Practical Jokes, and ventured into the movie business with popular exploitation films like Psych-Out (1968), The Savage Seven (1968) and Killers Three (1968).

In an unlikely role reversal, Dick Clark plays a TV announcer critical of youth culture run amok in Wild in the Streets (1968).

"Who in America can truly resist the clarion call of youth?" the announcer asks. "Never has it been so brazenly sounded. Experience? It has brought you nothing."

It's an uncharacteristically cynical pronouncement from a man whose uncanny youthfulness was essential to his brand. More likely, Clark will be remembered for empowering youth culture — and for quotes like "Music is the soundtrack to your life."

And, of course, his signature Bandstand signoff: "For now, Dick Clark. So long" — followed by that jaunty salute to the camera.