Accessibility links
New Rules To Curb Pollution From Oil, Gas Drilling The federal rules announced Wednesday will, among other things, soon require oil and natural gas drillers to limit air pollution from drilling operations. Though the requirements stand to save companies money long term, producers say pollution regulations should be left to the states. 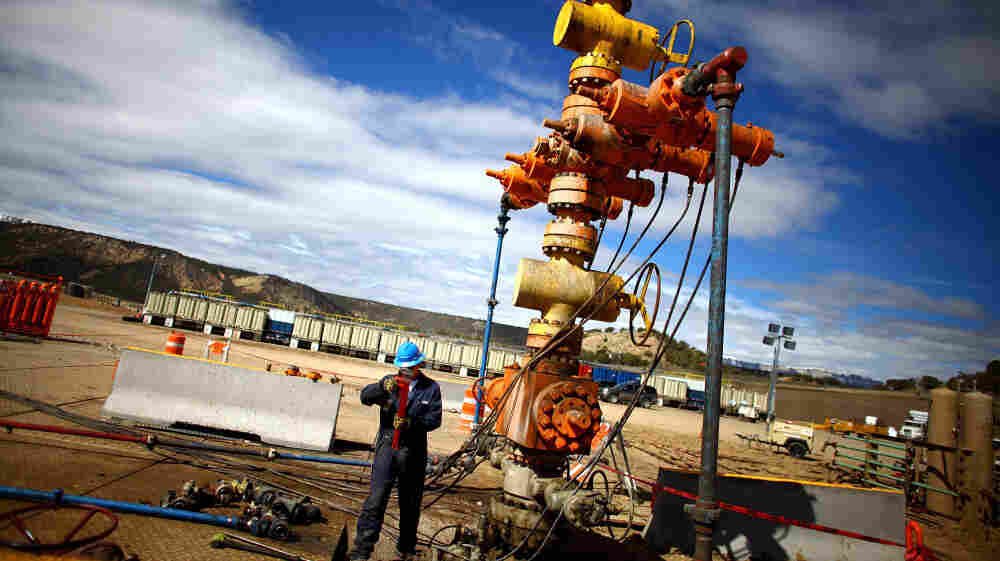 Oil and natural gas drillers use equipment like this to separate the liquid, gas and sand that come out of wells at the beginning of hydraulic fracturing operations. David Gilkey/NPR hide caption

The Environmental Protection Agency announced new rules Wednesday to control the problem of air pollution coming from wells being drilled by the booming oil and natural gas drilling industry.

Currently, waste products from the drilling operations, which include a mix of chemicals, sand and water, can be pumped into open enclosures or pits, where toxic substances can make their way into the air. The new rules will require this fluid to be captured by 2015, and flared — or burned off — in the meantime.

Some states, including Colorado, already require companies to do what the EPA will soon require everywhere.

Mark Balderston, who started working in the oil and gas industry 40 years ago, says that for most of his career, getting gas out of the ground has been an assault on his senses.

"It's going to give you a real heavy, industrial, garage-kind of smell almost," he says. "Real intense." 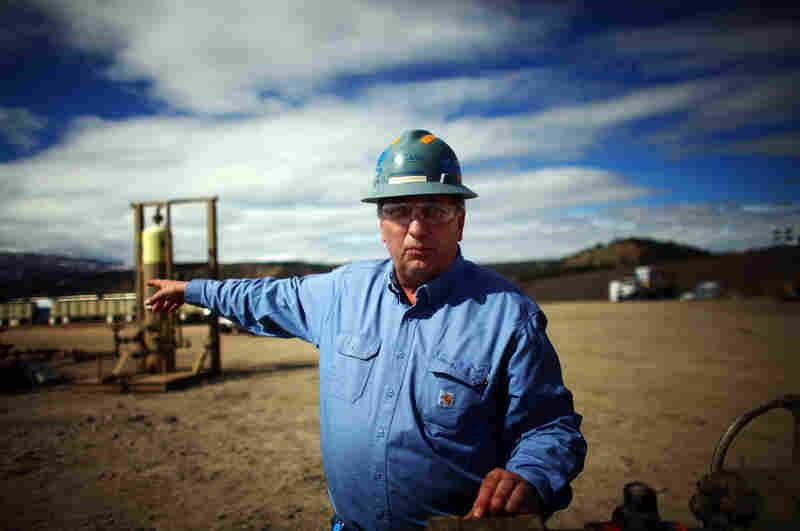 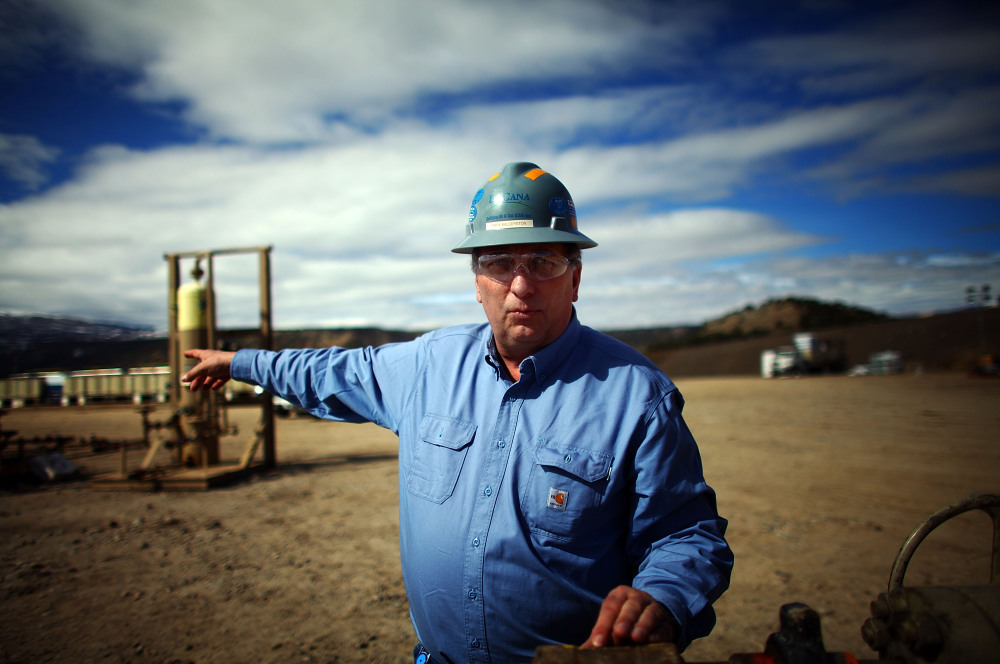 Mark Balderston, an engineer with Encana, a natural gas producer, points to a well pad completion site near Rifle, Colo.

Balderston, who is now a senior engineer overseeing well sites in Garfield County, Colo., is referring to the messiest parts of the operation, called well completion. It's the centerpiece of the EPA's new rules, and is the part of the process that pollutes the air the most. After a well is drilled, all the gas, mixed with water and other substances used to drill the well, comes gushing out.

In recent years, completions have become even messier because companies have started using an engineering technique called hydraulic fracturing, or fracking, which requires a lot more material to open up gas wells, and subsequently creates a lot more waste.

The general practice has been to send that waste into an open pit and let the gas coming up go directly into the air.

"A lot of that would be vented off — it's just let go, it's not contained anywhere," Balderston says. "And that's not good." Balderston says that venting could go on for weeks. But Colorado has been doing something different: "Now, it's all captured," he says.

Balderston is referring to a technique the industry calls "green completions" — that means the stuff gushing out of the well is collected right away. Colorado started requiring this on some wells a few years ago, as did Wyoming. The EPA's new rule will require them around the country.

At a green completion currently under way a few hours from Denver, Balderston points out a jumble of pipes, valves and tanks about the size of a UPS truck.

"The whole flow of the whole well — gas, water, everything — comes in one pipe," Balderston says. The equipment separates the gas from the water and the solids. "Basically oil floats on the water and gas floats on all that. It pretty much separates itself out all on its own."

Once the natural gas is separated and collected, it goes into the pipeline system, where Balderston's company, Encana, can sell it. So gas that was previously burned in a flare or vented as waste is now profit.

Though there are costs associated with the equipment and people needed to run it, "the benefits far outweigh those costs in the long run," Balderston says.

But he says green completions and other recent improvements greatly reduce the industry's impact on the environment.

"You just can't begin to imagine how fast things have changed [in the industry], just in the last few years — to the good," he says. "All of us guys that work out here feel more comfortable in what we do now because of that. These changes are positive for all of us."

The EPA says capturing these materials will reduce smog and protect people from toxic pollutants like benzene that can cause cancer. The new rule gives companies until 2015 to start doing green completions, and exempts certain kinds of wells.

But even with the caveats, some companies still oppose the EPA's rules: They say states and not the federal government should get to decide whether rules like these are necessary.