Accessibility links
Cruise Ship Didn't Aid Drifting Boat, Passengers Say It was international news when a small fishing boat was found adrift at sea several hundred miles from the Panama town where it launched, with only one survivor. Now allegations have emerged that weeks earlier, while the men were still alive, an American-based cruise ship saw them, but didn't help. 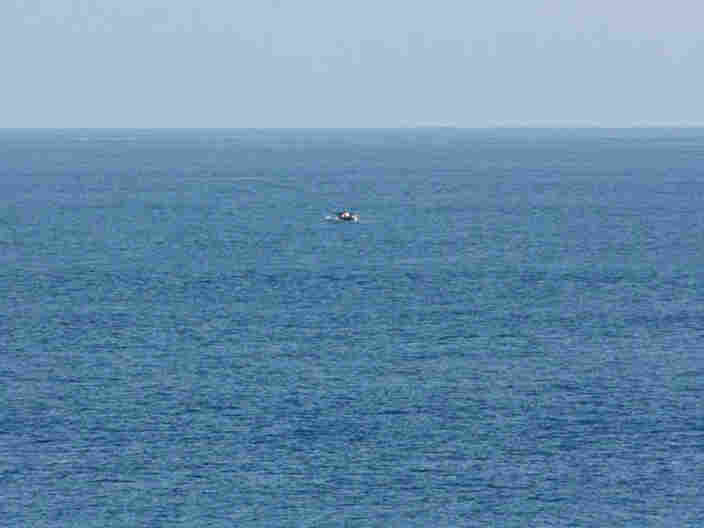 Bird-watcher Jeff Gilligan snapped this photograph of a small boat in distress. Gilligan and others say the cruise ship he was traveling on did not stop to help the stricken craft. Jeff Gilligan hide caption 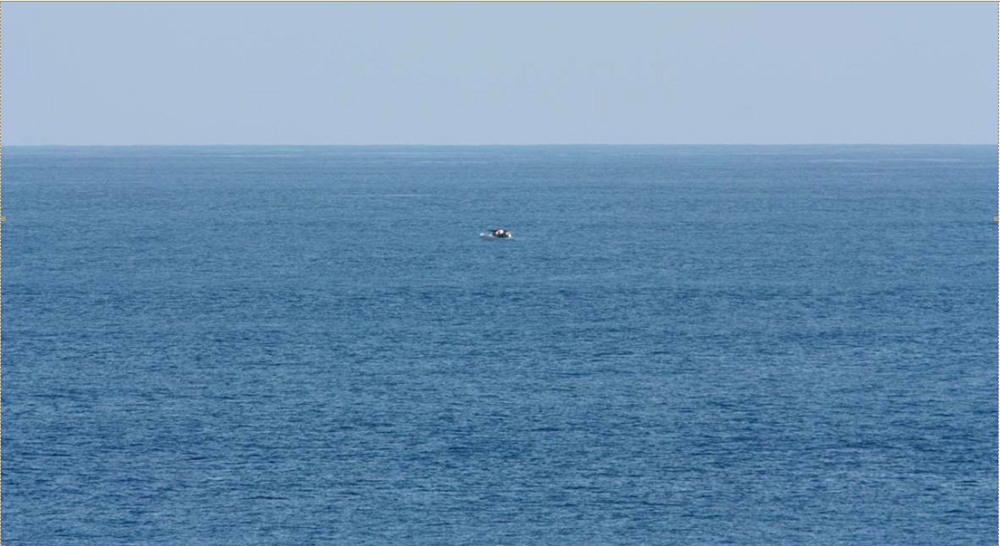 Bird-watcher Jeff Gilligan snapped this photograph of a small boat in distress. Gilligan and others say the cruise ship he was traveling on did not stop to help the stricken craft. 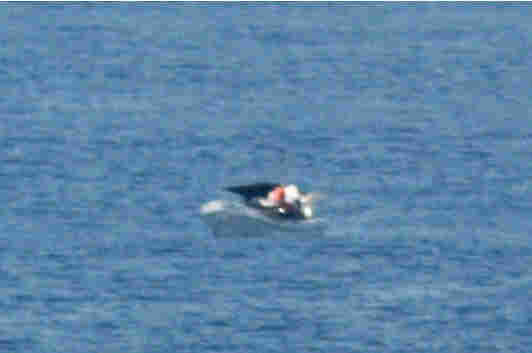 A zoomed-in view of the photo taken by Jeff Gilligan, of a boat drifting in the Pacific. When he saw the image, Adrian Vasquez — the boat's only survivor — said, "That's us." Jeff Gilligan hide caption 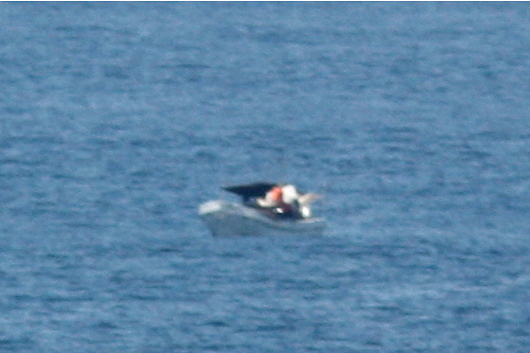 A zoomed-in view of the photo taken by Jeff Gilligan, of a boat drifting in the Pacific. When he saw the image, Adrian Vasquez — the boat's only survivor — said, "That's us."

It was international news recently when a small fishing boat was found adrift in the Pacific Ocean, several hundred miles from the Panama town where it launched. After 28 days at sea, only one of the three men who had been onboard was still alive. The other two died from lack of water and exposure.

Now there are allegations that weeks earlier, while all of the men were still alive, an American-based cruise ship, the Star Princess, spotted the drifting boat — but sailed on without stopping to help.

The Star Princess is a luxury cruise ship operated by Carnival. It has four pools, a nine-hole putting green, a casino, and cabins for some 2,000 passengers.

In March, on a cruise around South America, the passengers included three bird-watchers, two from Oregon and one from Ireland. They were on deck daily to watch for seabirds, using powerful binoculars and spotting telescopes.

On March 10, one of the birders, Jeff Gilligan from Portland, Ore., saw something through his binoculars out on the water, more than a mile away.

"We put our scopes on it," he says, "and we could see a moderate-sized boat with a person standing up in it, waving a dark piece of cloth."

One of the other birders on the Star Princess was Judy Meredith from Bend, Ore. She says, "We all watched him for a bit and thought, 'This guy's in distress. He's trying to get our attention. And he doesn't have a motor on his boat.' We could see that."

Meredith went inside to try to place a call to the ship's bridge, to alert the crew about what they'd seen. The only crew member she could find was with the ship's sales team.

"He called the bridge and I sort of talked through the story," she says. "And I was trying to have a sense or urgency in my voice — and tell them that the boat was in distress, and they were trying to get our attention."

A crew member used Gilligan's telescope to look at the drifting boat. Gilligan says, at that point, "We were a bit relieved because he had confirmed that he had seen what we were describing. We expected the ship to turn back or stop or something."

But soon, the bird-watchers realized that wasn't happening.

Gilligan says he and the other birders could only hope that the captain of the Star Princess was taking the appropriate steps — perhaps contacting Panamanian or other authorities, who would conduct search-and-rescue operations.

Meredith says they never heard back from the crew. In desperation, she marked down the ship's coordinates and sent an email to a Coast Guard website, without results.

When she got home, Meredith contacted Princess Cruises to see what action was taken. She says a customer relations representative told her the captain reported a different version of the incident — and that according to the captain's log, the ship had been passing through a fishing fleet.

Eventually, the bird-watchers learned of a news story from Ecuador. The Ecuadorean coast guard had picked up a small fishing boat near the Galapagos Islands with just one survivor aboard: 18-year-old Adrian Vasquez.

Vasquez told a harrowing tale of leaving Panama for an overnight fishing trip, then losing power and spending the next 28 days drifting. During that time, the two other fishermen with Vasquez died.

It seemed improbable, but Meredith and the other bird-watchers wondered, "Could this be the boat they saw?" In Panama, reporter Don Winner with the website Panama-Guide.com tracked down Vasquez and recorded video of the interview.

Winner showed Vasquez a photo the birders had taken of the fishing boat they saw.

"That's us," Vasquez said. He and the other men used their orange flotation devices to try to signal to get someone's attention, he said. Winner asked him about the Princess Star.

"Yes, we saw a cruise ship," Vasquez said. He said one of the other fishermen, Oropeces Betancourt, 24, died the following day. The third fisherman, Fernando Osario, 16, died five days later.

International maritime law clearly requires ships that come upon other vessels in distress to render assistance, if they can do so without endangering themselves.

In a statement, Princess Cruises says, "We're aware of the allegations that Star Princess supposedly passed by a boat in distress that was carrying three Panamanian fishermen on March 10. At this time we cannot verify the facts as reported, and we are currently conducting an internal investigation on the matter."

Princess isn't commenting on the earlier version of the story Meredith says she got from a company customer services representative.

Meredith says the experience has left her feeling sick about what Vasquez, his friends and their families had to go through.

"Three people were alive on the day they saw us and the day we saw them," she says. "They tried everything they could think of to signal us. And our boat went by, and his buddy died that night."

The Star Princess is registered in Bermuda. An official with Bermuda's Department of Maritime Administration says his office is in contact with Princess about the incident but hasn't determined yet whether it will conduct a full investigation.