Accessibility links
How A 'Western Problem' Led To New Drilling Rules New EPA rules would control air pollution coming from wells being drilled by the oil and natural gas industries. The rules are a result of a lawsuit by an environmental group that sued the agency to clean up the drilling industry after communities in Colorado, New Mexico and Wyoming complained about air pollution. 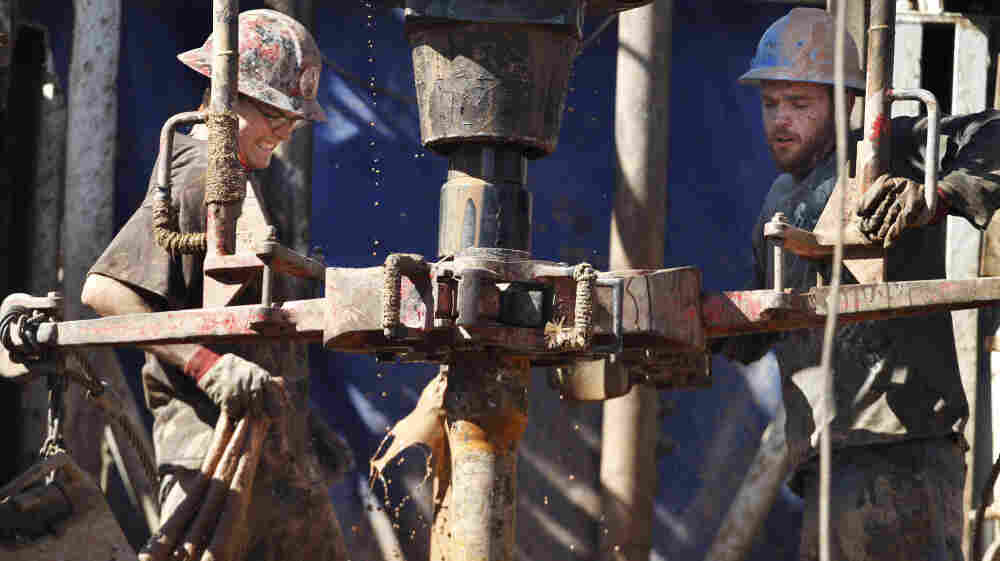 The Environmental Protection Agency's new air pollution rules for the oil and gas industry may seem like odd timing, as President Obama has been trying to deflect Republican criticism that he overregulates energy industries. But the rules weren't the Obama administration's idea.

Several years ago, communities in Colorado, New Mexico and Wyoming complained about air pollution from natural gas booms in their local areas.

Jeremy Nichols and his group, the WildEarth Guardians, decided to sue the EPA to force the agency to clean up the drilling industry.

The WildEarth Guardians prevailed, and the EPA set about making new rules.

Nichols had no inkling that by the time the rules were done, the drilling boom would have spread across the country, and energy regulations would shape up into an issue for the presidential campaign.

I think EPA pulled through in a big way here. I mean, this is going to have an immediate effect of keeping toxic pollution out of the air that people breathe.

"Back in 2008, we wanted to solve this distinctly Western problem, and in the meantime this issue became a national issue," he says.

An engineering technique called hydraulic fracturing — or fracking — sparked a nationwide drilling bonanza. The EPA says all of that drilling sends significant amounts of pollution into the air, contributing to smog and making people sick. A lot of pollution and natural gas spew out of the well while drillers are waiting to connect the gas stream to a pipeline. Starting in 2015, gas companies will be required to capture that pollution and wasted natural gas. In the meantime, companies will have to burn it in a flare, which makes it less harmful.

"I think EPA pulled through in a big way here," he says. "I mean, this is going to have an immediate effect of keeping toxic pollution out of the air that people breathe."

Gina McCarthy, who heads the EPA's air-pollution programs, says the initiative will save companies money because they will be able to sell natural gas that they've been wasting.

"It saves precious natural gas resources that otherwise would have been emitted into the atmosphere," she says. "It reduces smog, it protects public health, and it's certainly good for the environment."

This rule has a very large cost compared to the benefit.

McCarthy says it won't slow down the industry, but that's not the story you'll get if you talk with Kathleen Sgamma, a vice president of Western Energy Alliance, which represents drilling companies in the West.

"This rule has a very large cost compared to the benefit," she says.

Sgamma says gas drilling doesn't produce enough air pollution to be harmful. So it doesn't make sense to make companies buy all the equipment and do all the paperwork required by these rules. She says the initiative is contrary to what the president has been saying about his commitment to increasing domestic energy production.

"While we hear some good rhetoric, we're still seeing an administration that is making it more difficult and costly to develop natural gas," she says.

"This president has been an anti-energy president," he said.

"The intent, of course, is to slow down the development of our own resources," he said.

The boom is slowing down — because there's so much natural gas already on the market and prices are at historic lows. One thing is for certain: This issue will keep coming up all the way until Election Day.