Accessibility links
In Kashmir Conflict Zone, The Glacier Is The Enemy It's been years since shots were fired on the Siachen glacier, where troops from Pakistan and India face off. Still, both countries devote considerable resources and often pay high costs — a point driven home by the deaths of 140 Pakistanis in an avalanche. 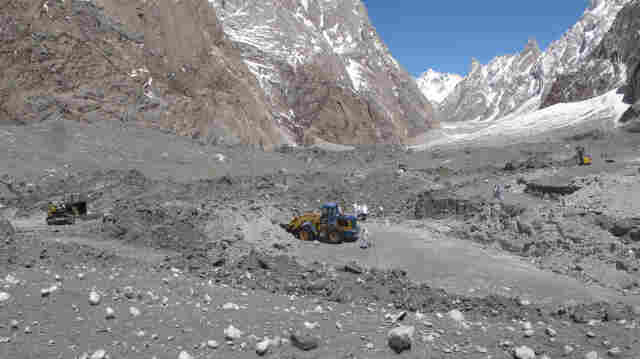 Pakistani soldiers work Wednesday at the site of an avalanche that buried 140 people, including 129 soldiers, April 7 on the Siachen glacier. The incident revived debate in Pakistan over the price of patrolling the frozen area in the Kashmir region along the Indian border. Julie M. McCarthy/NPR hide caption

In the chill of the world's highest combat zone lies the prospect of warmer relations. Pakistan's army chief said Wednesday that there's a need to resolve the conflict that has Indian and Pakistani troops facing off at frigid altitudes of up to 20,000 feet in the Himalayan Mountains. An estimated 3,000 Pakistani soldiers have died from the atrocious weather conditions since deployments on the Siachen glacier began in 1984.

Gen. Ashfaq Kayani conducted an aerial tour Wednesday with President Asif Ali Zardari of the massive landslide that buried a battalion of Pakistani soldiers in their headquarters on the glacier. In a rare encounter with reporters afterward, Kayani said the standoff is costly in many ways and called for "peaceful co-existence" with India.

The Siachen disaster has revived a debate in Pakistan over the price of patrolling the frozen area that required a transport plane, a helicopter and a bone-crunching drive to reach.

The majestic peaks are worth the price of admission, but a menace looms on the Siachen glacier: Along this northern tip of Kashmir, the emotional heart of the Pakistan-India conflict, troops from the two nuclear powers are "eyeball to eyeball" in unforgiving conditions.

Not a shot has been fired in years in this conflict, though. The main enemy in this craggy outpost 13,000 feet above sea level is the cold. More soldiers have been killed by the atrocious weather conditions — temperatures plunge to 50 below zero — than by combat.

Twelve days after rescuers descended on the icy scene of the latest avalanche, not a single person has been pulled out, dead or alive. The anguishing incident raises the question of whether the uninhabitable Siachen glacier is worth fighting for.

Bulldozers have been operating around the clock to unearth the headquarters of Pakistan's 6th Light Infantry Battalion and the 140 souls smothered beneath a square kilometer of ice and rock.

Soldiers in snowy white down jackets swarm the area that has suddenly turned springlike and thus more prone to fresh landslides. Members of the media escorted to the area are given a primer on what to do if there is a slide: "If you listen to long blast of whistles and the shouting 'avalanche!' you have to run, that way — look at that back [rock]."

Siachen commander Brig. Saquib Mehmood Malik explains that the landslide encased the 129 soldiers and 11 civilians under 200 feet of crushed granite and ice. 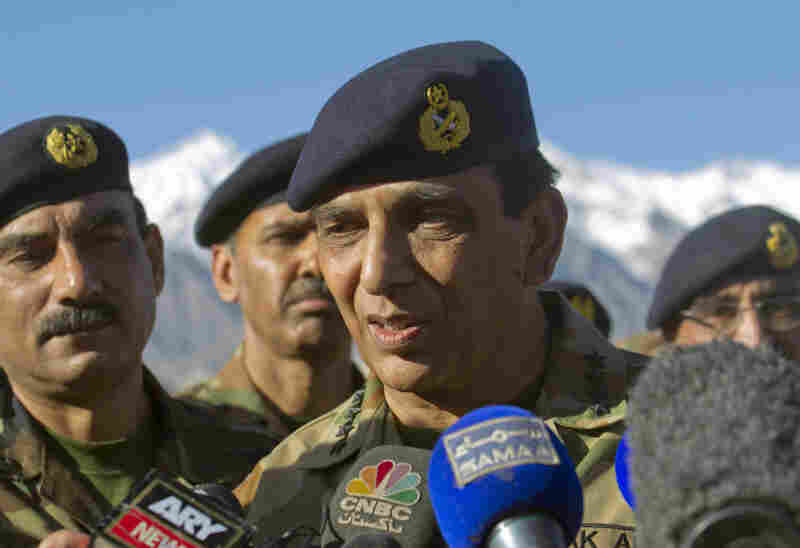 Pakistan's army chief, Gen. Ashfaq Kayani, talks with reporters after visiting the avalanche site on the Siachen glacier Wednesday. Kayani has called for the peaceful resolution of the regional dispute with India. B.K. Bangash/AP hide caption 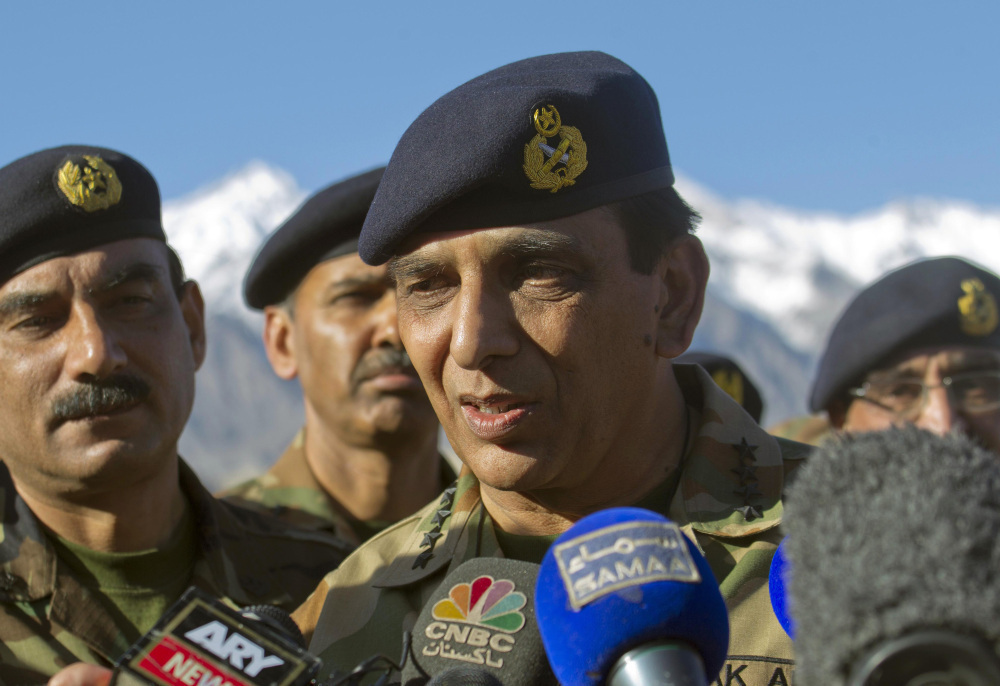 Pakistan's army chief, Gen. Ashfaq Kayani, talks with reporters after visiting the avalanche site on the Siachen glacier Wednesday. Kayani has called for the peaceful resolution of the regional dispute with India.

"Therefore, this effort is a very, very large magnitude. And the boulders are as big as the one you can see at the back," says Malik. The boulder he points out sits like a cenotaph above the site where workers now dig.

Kayani, the Pakistani army chief, said Wednesday that the army will dig as long as it takes to retrieve the men. He also suggested that Pakistan is interested in demilitarizing the frozen installations that are costing $5 million a month and polluting the environment — pollution that Kayani said must end.

"For us, Pakistan, it is very important. You see, this is the glacier which feeds our rivers, which feeds the Indus River, which is the main river in Pakistan," Kayani said. "So we understand that physical deployment of troops in these areas, the ... environment gets affected.

"If there is no other reason, I think ... this area should not be militarized. You can't afford to be firing guns in the glacier regions. We understand that."

Depression and oxygen deprivation also play havoc with the men. Sardar Mohammad Tariq Aziz, 37, lost his toes and heels to frostbite serving on Siachen in 1999. A fellow soldier had to have his legs amputated after they both fell from their post on a moonlit night during a landslide.

"I fell into a crevice — it must have been 15 to 20 feet down," Aziz excitedly says in Urdu. "We were lying there the whole night, crying out of pain. It took about 26 hours for them to finally pull us out and get us to a hospital."

This veteran of Siachen adds that no soldier should be there.

Retired Brig. Javed Hussain says the Siachen glacier is strategically unimportant and calls the deployments for the past 28 years pointless. He says the governments on both sides must show statesmanship and negotiate a withdrawal. The agreement "could be based on demilitarization of the zone, pulling out of the forces by the two sides, with the United Nations acting as a guarantor."

With a tentative peace process under way, Pakistan-India relations are at their warmest in years. For a growing number of Pakistanis, the disaster on the frozen ridges of Siachen should accelerate that thaw.