Accessibility links
Ignoring Critics, Argentina To Nationalize Oil Firm The oil company is the largest in Argentina, and is owned mostly by a private Spanish company. The move has raised howls of protest from Spain, and seems to harken back to an earlier era in Latin America. 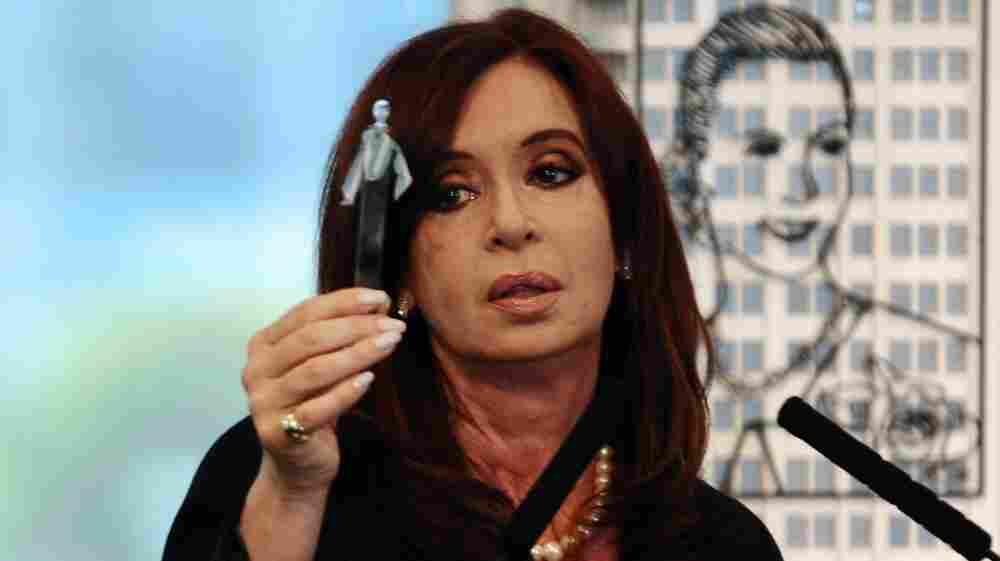 Argentine President Cristina Fernandez holds a petroleum sample as she announces plans for her government to nationalize a giant oil company that is largely owned by a private Spanish company, Repsol. Behind her is an image of the country's former first lady, Eva Peron. Daniel Garcia/AFP/Getty Images hide caption

It's sounds like a story from the past: A Latin American leader announces plans to nationalize a large foreign company, touching off a high-stakes battle that involves money, politics and diplomacy.

Yet it's happening right now. Argentina's President Cristina Fernandez said this week that her country plans to take over a giant Spanish oil company at a time when the economies in both countries are facing challenges.

Spanish officials are threatening to retaliate against Argentina for seizing a majority of shares in the biggest oil company in Argentina, YPF.

The move also raised concerns about foreign investments in the region and whether Argentina's move points to the possibility of additional expropriations of foreign companies.

The Argentine plan calls for the state to take 51 percent of the company, all of it coming out of the 57 percent that is now owned by Repsol of Spain. Other shareholders in the company would be untouched.

Fernandez said it is necessary to nationalize YPF, because Repsol had taken most of the company's profits back to Spain, leaving Argentina without the resources to develop new energy sources.

She said it was a matter of Argentina's national security, because the country has had to start importing fuel.

It's a turnabout for an oil-producing nation. Argentina began importing fuel in 2010, and could face a bill for imported energy of as much as $14 billion this year.

Fernandez knew that she would face condemnation from Spain and other countries. When she made the announcement, she declared, "I am a head of state, and not a hoodlum."

Argentina says it will compensate Repsol for the shares, but the amount will be determined by an Argentine panel. 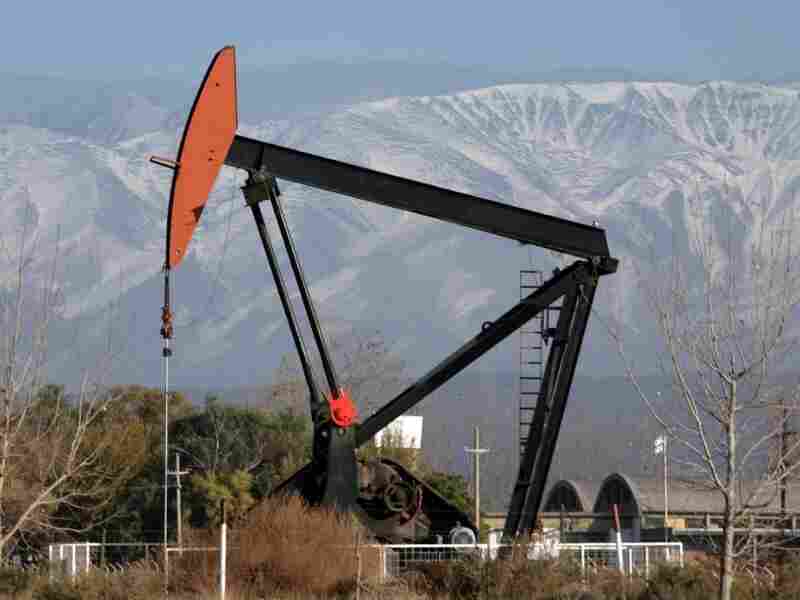 A pump extracts crude oil in western Argentina, at the foot of the Andes mountain range near the border with Chile, in 2007. The refinery is owned by the Spanish company Repsol, but Argentina's government plans to take over the company, which is complaining about the move. Diego Giudice/Bloomberg via Getty Images hide caption 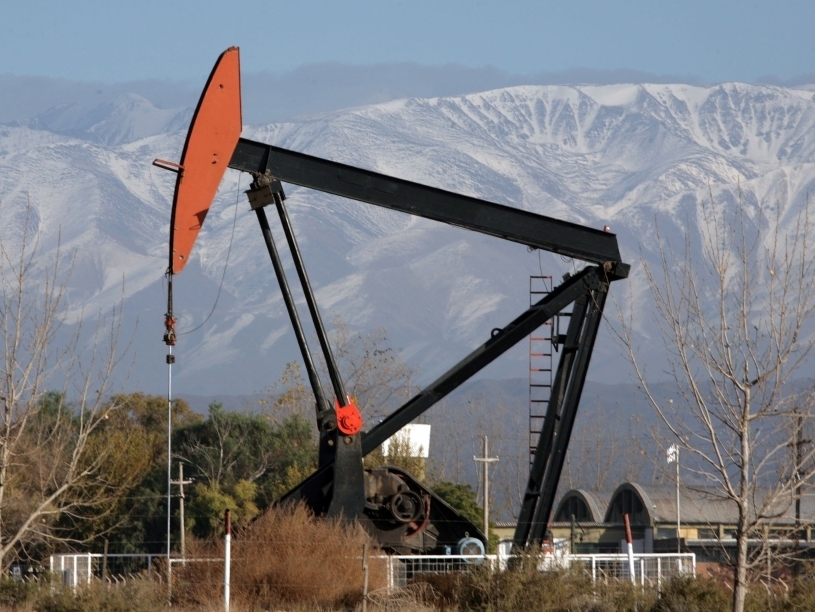 A pump extracts crude oil in western Argentina, at the foot of the Andes mountain range near the border with Chile, in 2007. The refinery is owned by the Spanish company Repsol, but Argentina's government plans to take over the company, which is complaining about the move.

Repsol officials say their stake in the company is worth at least $10.5 billion. The company's shares have tumbled this week after Fernandez announced her plan. Argentina's Senate plans to vote on the move next week, and there appears to be overwhelming support for nationalization.

YPF announced a major shale oil discovery in November, in a part of southwest Argentina with the unpromising name of Vaca Muerta, or "dead cow." Developing the reserves in that region will be expensive, analysts say.

So why would Fernandez take this step now?

"In one word, politics," says Moises Naim, a political columnist for Spain's El Pais and other papers. Naim says that Fernandez's left-leaning government has mismanaged the economy and is in need of money.

"Latin America is divided between countries that are doing well, and some that are lagging behind," Naim says.

He cites Colombia, where he recently attended the Summit of the Americas, as an example of "what was once an untouchable, radioactive country that is now doing quite well," both in promoting development and reducing income inequality.

Naim says Argentina is one of the region's laggards "because of policies that have made it impossible for investors to invest." He cited the government's failure to maintain infrastructure and its earlier nationalizations of two utilities and an airline.

But Fernandez is a popular figure in Argentina, having won re-election last year with more than 54 percent of the vote and a wide margin over her nearest rival.

She's often compared with the fiery Eva Peron, and she chose to make the announcement nationalizing YPF in front of an image of Peron, Argentina's former first lady and the inspiration for the musical Evita.

Economist Mark Weisbrot isn't buying the claim that Argentina's economy is on the ropes.

Weisbrot, the co-director of the Center for Economic and Policy Research in Washington, points to International Monetary Fund projections that show the Argentine economy has grown by more than 90 percent in the decade since the country's economy collapsed and it defaulted on its debt in 2001.

The IMF is projecting that Argentina's gross domestic product will gallop like a gaucho this year, growing by nearly 5 percent. That's more than twice as fast as the United States.

Weisbrot says Argentina's real problem is that it needs a steady flow of foreign exchange, in part because international lenders are still wary after the country defaulted on its debt.

That means the country needed to get more out of its oil resources than the Spanish company was providing.

Weisbrot says it was a mistake for Argentina to privatize its oil industry in the early 1990s, though he thinks it makes sense for the government to take YPF back now.

The big mistake is to say, 'Here comes another wave of nationalizations.' As the world was spinning out of control, the region that navigated [the global economic crisis] the best was Latin America. Because Latin America is the world champion of these crises, and society has learned what not to do.

He points out that most of the world's biggest oil-producing nations, such as Saudi Arabia and Russia, capture their profits through state-run oil companies.

A History Of Nationalizations

Nationalizing foreign companies has long been a temptation for cash-strapped developing countries in Latin America and elsewhere. It's been much less common in recent years, though there are still examples.

In Bolivia, President Evo Morales has nationalized oil and gas, telecommunications and electricity, and silver mining.

But other countries with left-of-center governments have moved toward policies that are generally welcoming toward foreign investment, including Brazil, Peru and Uruguay.

"Labels of left and right don't mean that much," says Naim. "There are likely to be more nationalizations in the countries that are not doing well, but this is not an ideological issue."

Will There Be A Backlash?

Analysts agree that the Argentine nationalization is likely to hurt the country's ability to attract foreign investment. But they disagree on how serious the consequences may be.

"Investors don't like this, but does that matter?" asks Weisbrot. "South Korea relied very little on foreign direct investment [during its major expansion], so it's not an essential ingredient of economic growth."

On the other hand, there's the question of whether Argentina can come up with the money needed to develop YPF's oil holdings.

"I don't think any country with [Argentina's] size of reserves can develop the company without the aid of international investors," says economist Eduardo Levy-Yeyati. "In Argentina, where the financing costs are already so high, this is doubly true."

Levy-Yeyati, a senior fellow at the Brookings Institution, is a former chief economist at the Central Bank of Argentina.

He says much will depend on whether Argentina pays what is perceived as a fair price for Repsol's stake in the oil company.

Despite the threats of retaliation from Spain, Levy-Yeyati says the cash-strapped Spaniards don't have much leverage against Argentina.

Argentina exports a lot of biodiesel to the European Union, and particularly to Spain, he says. But it's unlikely that other EU members could be persuaded to take part in a boycott of Argentine products.

Because of its financial problems, Levy-Yeyati says, "Spain is in no position to ask for more solidarity from the rest of Europe."

Still, he adds, even if Argentina goes unpunished, "this doesn't look like the first chapter in a long-running saga."

Moises Naim agrees. "The big mistake is to say, 'Here comes another wave of nationalizations.' As the world was spinning out of control, the region that navigated [the global economic crisis] the best was Latin America. Because Latin America is the world champion of these crises, and society has learned what not to do."