Accessibility links
Ariz. Immigration Law Limbo Sees Mixed Results Arizona's immigration law is about to have its day in the Supreme Court. But in the nearly two years since it passed, things in Arizona have been changing — crime has gone down and labor violation complaints have gone up, though the law's contribution to those changes is up for debate. 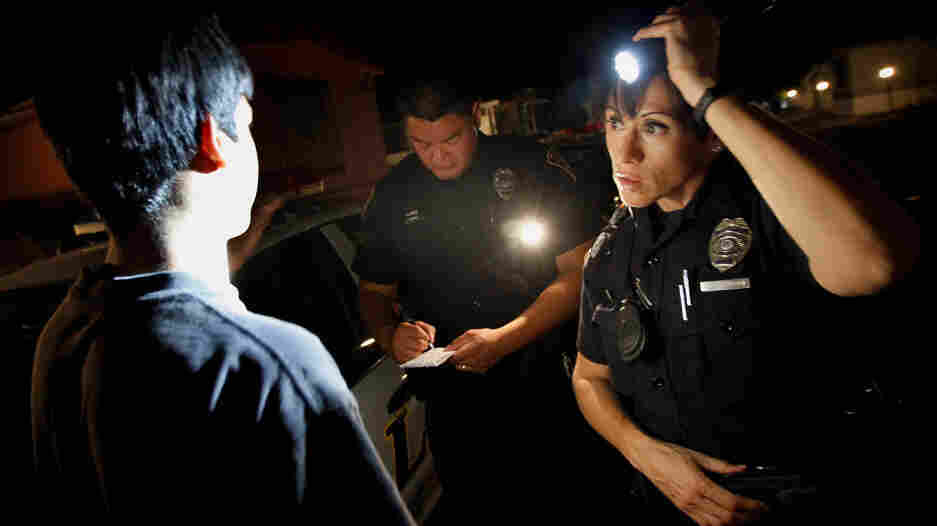 Tucson, Ariz., police officers work in the city's predominantly Hispanic South Side in May 2010. Since April 2010, when Arizona's controversial immigration bill passed into law, crime in the state has hit a 30-year low. Some attribute this to the law, but others are not so sure there's a connection. Scott Olson/Getty Images hide caption

The Supreme Court is about to take up one of this term's biggest cases. Next Wednesday, the court will hear arguments challenging Arizona's controversial state immigration law, known as SB 1070.

Among other things, the law makes it a state crime to be in the country illegally and requires police to question the immigration status of people they stop. Lower courts blocked parts of the law when it was passed nearly two years ago.

But in that time, things in Arizona have been changing.

Back in 2010, when SB 1070 passed, opponents protested in the streets of Phoenix while police around the state prepared themselves. Every local police officer and sheriff's deputy had to take a class and watch video instruction on the law's enforcement.

And while a federal judge blocked key parts of the law, she couldn't block the law's intent — stated right there in the bill — to make Arizona so inhospitable to illegal immigrants that they leave.

Migrant-rights activist Lydia Guzman says that's just what they did. "They left to New Mexico or they left to Utah or somewhere else where they thought it might be a friendlier place," Guzman says.

'An Unprecedented Drop In Crime'

Ariz. Immigration Law Is A Challenge For Police

Russell Pearce, the former state Senate president who authored the law, says it's already having an impact — and it hasn't even been fully implemented yet.

"Crime is at a 30-year low — an unprecedented drop in crime," he says. "The prison population is on the decline."

It's debatable whether SB 1070 can get all the credit, though. The exodus from Arizona actually began before the law passed, when jobs in Arizona's construction industry dried up in the recession.

As for the falling crime rate, Pima County Sheriff Clarence Dupnik says there has been a significant drop in his jail population, but he points out that FBI statistics show crime rates are down in many states, including neighboring states that haven't passed immigration laws.

"This is going on all over the country," Dupnik says. "This isn't just Tucson, Ariz., or Pima County or Arizona."

Labor Violations In The Shadow Of SB 1070

As crime rates have gone down, Guzman says abuse against illegal immigrants who stayed in Arizona has gone up.

Guzman says she and her colleagues have gotten close to 1,000 calls from immigrants who've been taken advantage of by employers and landlords. But, again, it's debatable how much SB 1070 is responsible, since federal immigration enforcement has also picked up.

One thing that isn't up for debate is the political backlash. When the law passed, polls showed the majority of Arizona voters supported it. But last November, Pearce, the law's architect, became the first elected Arizona official to be removed from office in a recall. Hispanics mounted a heavy get-out-the-vote effort to defeat him.

"If this is what it takes for us to get angry [enough] to go out to the polls, well then you're going to have a lot of folks that are angry [and] going to the polls," Guzman says.

She says she and other activists are pushing legal residents toward citizenship and mounting voter registration drives. But getting Arizona's Hispanic citizens to the polls is going to be another challenge — four years ago, their turnout was 16 percent below the overall electorate.