Accessibility links
As Workers Age, Oil Industry Braces For Skills Gap Two years after the Deepwater Horizon disaster, one issue has received little attention: the oil industry faces a shortage of experienced workers. Some analysts are concerned more inexperienced workers could compromise safety, but the industry says training is more rigorous than ever. 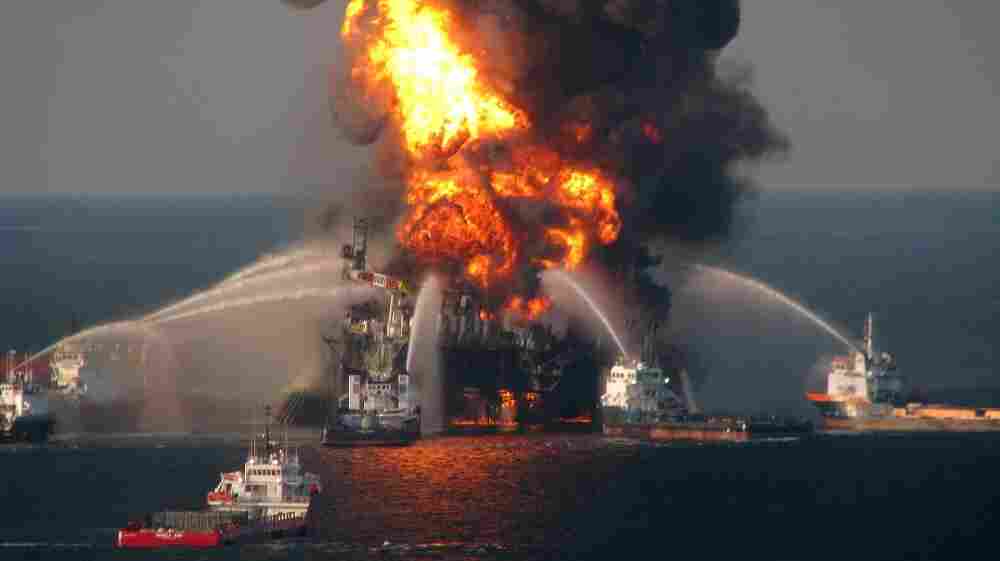 The Deepwater Horizon oil rig burns in the Gulf of Mexico in April 2010. The rig's crew were new to their positions just before the explosion. Such staffing reorganizations are increasingly common as the industry grapples with a staffing shortage. U.S. Coast Guard/Getty Images hide caption 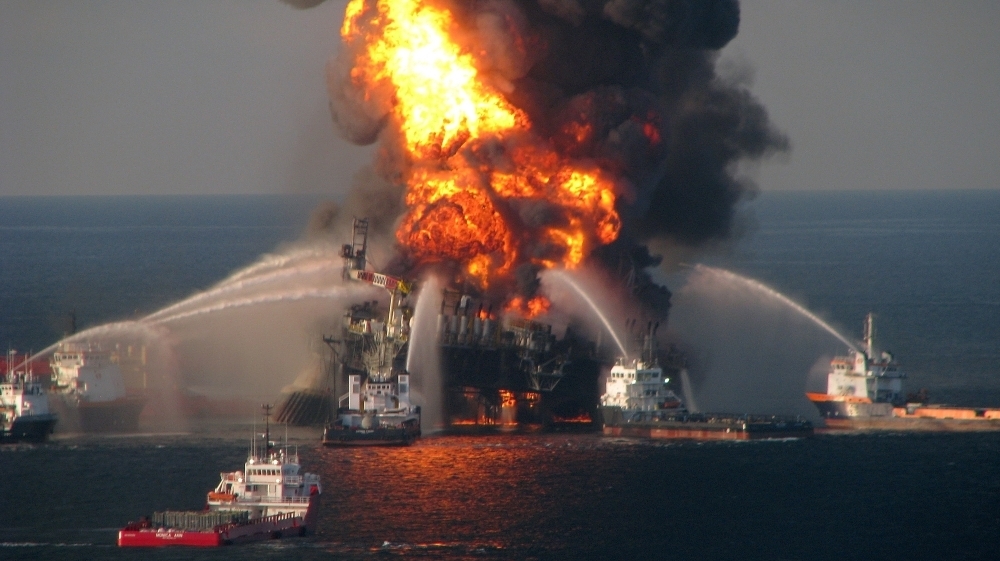 The Deepwater Horizon oil rig burns in the Gulf of Mexico in April 2010. The rig's crew were new to their positions just before the explosion. Such staffing reorganizations are increasingly common as the industry grapples with a staffing shortage.

Two years after the Deepwater Horizon accident killed 11 men and sent oil spewing into the Gulf of Mexico, the oil industry says it has learned valuable lessons from the disaster that are making drilling safer today.

Dubbed "the great crew change," the staffing challenge comes even as crews venture into places where drilling is more difficult, like the Arctic and below the world's oceans.

Investigations into the 2010 Deepwater Horizon disaster point to a series of mistakes, including a failed blow-out preventer and results of a key test that managers ignored.

But investigations by the U.S. Department of the Interior and a presidential commission also point to an issue that has received much less attention: there was a reorganization of personnel on the rig just before the accident. While the new crew leaders had years of experience, they were new to their positions.

"When the Deepwater Horizon exploded, no one in the BP engineering team had been on the job for more than six months," says John Konrad, a former drill ship captain and co-author of Fire on the Horizon: The Untold Story of the Gulf Oil Disaster.

When the Deepwater Horizon exploded, no one in the BP engineering team had been on the job for more than six months.

John Konrad, author, 'Fire on the Horizon: The Untold Story of the Gulf Oil Disaster'

Konrad says such staffing reorganizations are becoming more common. Around the globe, as more huge drill ships like the Deepwater Horizon are built to take advantage of high oil prices, companies have had difficulty finding enough experienced workers.

And just as demand for more experienced workers is rising, their numbers are declining. A survey by Schlumberger Business Consulting finds that 22,000 experienced geoscientists and engineers will leave the field by 2015.

While workers currently rising through the ranks will replace many retirees, the survey shows a quarter of those positions will be filled by much younger workers with less experience.

The oil bust of the 1980s helps explain the demographic shift in the industry. As crude prices plummeted from $35 a barrel to $10, companies laid off workers and, in many cases, stopped hiring.

Three decades later, those staffing changes have left an age gap in the industry's workforce.

A growing number of training programs are attracting new potential workers who hope to fill that gap. Marvin Harris, a student at Lone Star Corporate College outside of Houston, hopes to transition from a warehouse job to a position in the oil industry.

"There's always opportunities in the oil field to move up, move around, see different countries and travel," Harris says. "I love to travel, and in the oil industry you get to travel quite a bit." 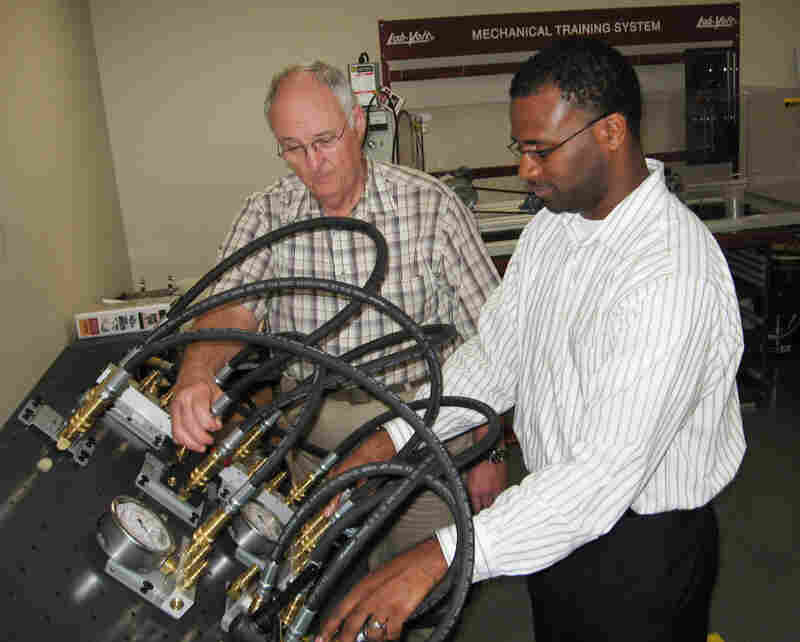 George King (left) with student Marvin Harris in a training lab at a Lone Star College campus in The Woodlands, Tex. Harris plans to work in the oil and gas industry upon completing his program. Jeff Brady/NPR hide caption 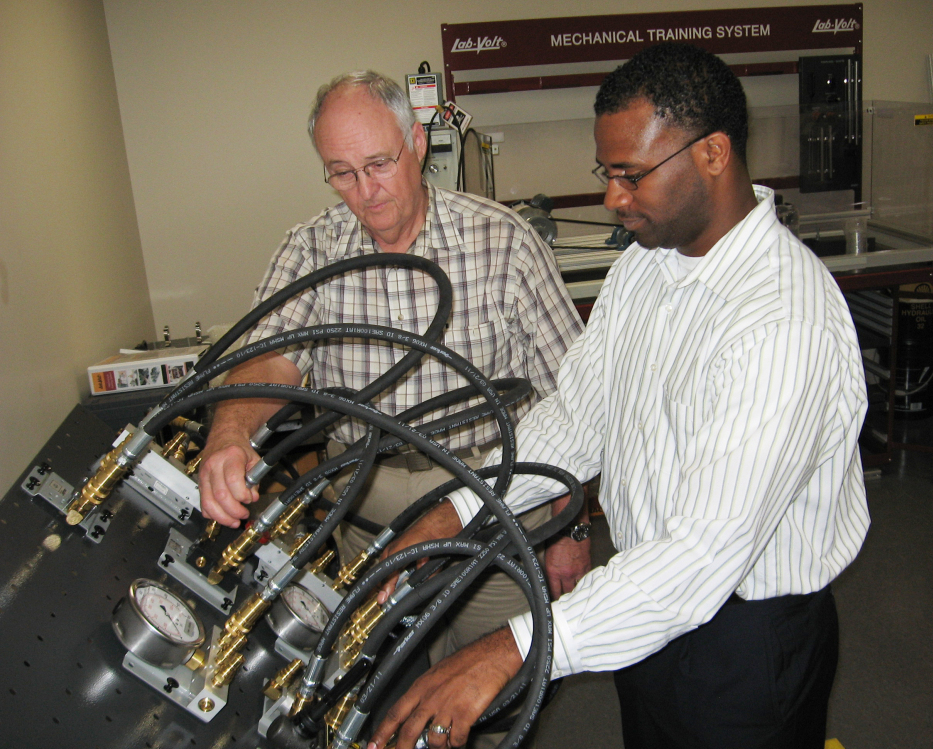 George King (left) with student Marvin Harris in a training lab at a Lone Star College campus in The Woodlands, Tex. Harris plans to work in the oil and gas industry upon completing his program.

George King, an instructor at Lone Star, spent a career as a mechanical engineer in the oil and gas industry before turning to teaching.

"A significant amount of technology, expertise and knowledge — know-how — is leaving the industry," King says. "So those of us that are ending our careers in industry are coming back into education, because we have a story to tell — and we have skills and experiences that can be relayed through teaching."

The question for the industry now is whether expertise, once developed over a decade or more on the job, can be taught in classrooms in a matter of months.

Another concern for many industry observers: if transitioning from a workforce with decades of experience to one that's just getting its bearings will compromise safety.

Noe points to federal Bureau of Labor Statistics data showing the trend for injury accidents in the oil business has been heading down. He says there are incentives to make sure that continues.

"I think we've all seen what happens when you have a big incident — and how much of a business interruption and how much business impact that can have — by looking at BP," Noe says.

BP estimates the disaster will cost the company more than $40 billion, and is selling assets to help pay those costs.

Today, BP wants to demonstrate that it will operate safely. Even quarterly earnings calls begin with Chief Executive Bob Dudley issuing a safety message about what to do if the fire alarm goes off.

Mark Denkowski, vice president of accreditation and certification at the International Association of Drilling Contractors, says extensive safety briefings and long training programs are quite a change from his experiences early in his career.

"Thirty years ago ... when I saw my first rig ... there was little or no training," Denkowski says. "It was literally, 'Here's your hard hat, here's some safety equipment, and go to work,'"

"No longer would you have a person that's just hired and literally put on a boat or on a helicopter and flown out to a rig with little or no orientation or training," Denkowski says. "Companies are going to be required to prove that that individual has been through that orientation."

Two years after the Deepwater Horizon disaster, the industry says it's doubling down on safety. The real test — as a generation of experienced workers retires and a new generation takes over — is ahead.