Accessibility links
The St. Cuthbert Gospel: 1,300 Years Old, And Looking Pretty Good The St. Cuthbert Gospel was buried alongside its titular saint in the late seventh century, making it Europe's oldest intact book. After a massive fundraising campaign, the British Library acquired the handwritten, leather-bound tome, which is in surprisingly good condition. 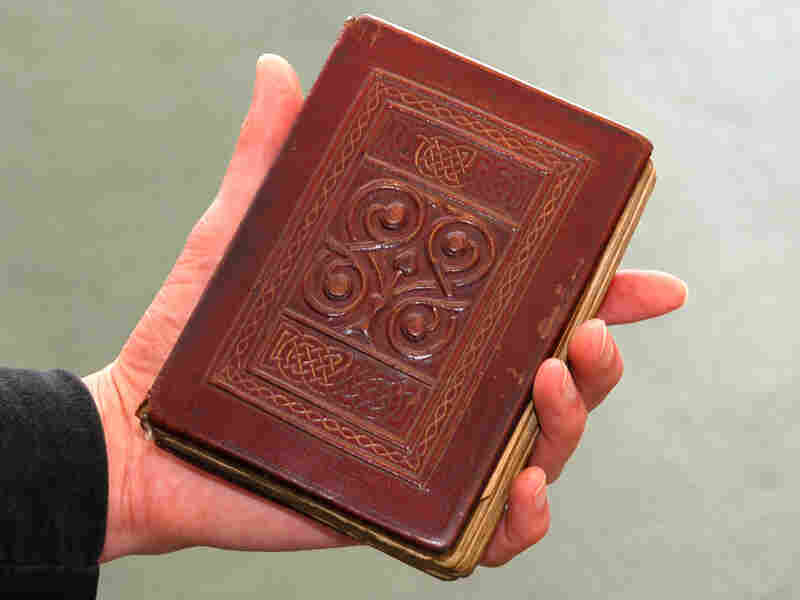 The Gospel, buried with St. Cuthbert in 698, was recovered from his grave in 1104. Its beautiful red leather binding is original. Courtesy of the British Library hide caption 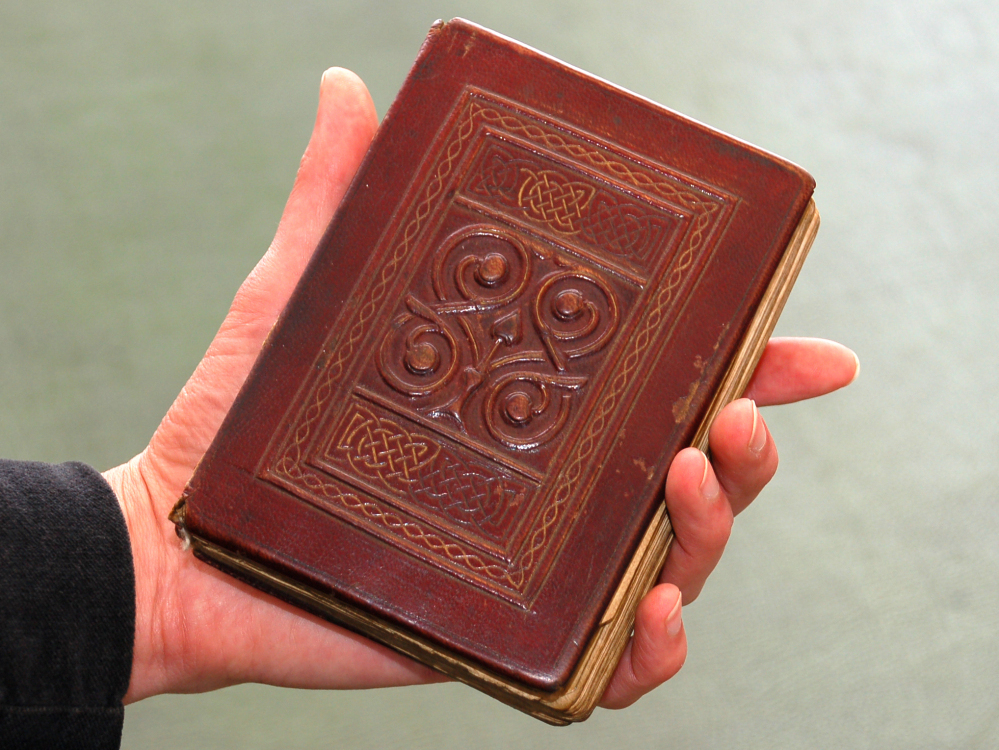 The Gospel, buried with St. Cuthbert in 698, was recovered from his grave in 1104. Its beautiful red leather binding is original.

How much would you pay for a very rare book?

The British Library in London has just paid about $14 million to purchase Europe's oldest intact book, known as the St. Cuthbert Gospel. It's a copy of the Gospel of St. John, thought to have been produced in northeastern England sometime during the seventh century.

Claire Breay is the curator of medieval and early modern manuscripts at the British Library. She says the book's beautifully decorated red leather cover is a wonderful example of Anglo-Saxon leather work, and the inside is astonishingly well-preserved. "The text is beautifully clearly written, looks almost as if it were written yesterday," she says.

"It is the earliest intact European book. So its pages, and the stitching that holds them together, and the covers that protect the pages are intact, as it was made at the end of the seventh century," she adds. "So it's really the starting point of our evidence for the history of the Western book."

The book also has a colorful history because of its association with St. Cuthbert, whom Breay describes as one of the most significant saints in early medieval Britain. "He was ... a great missionary, responsible for the conversion from paganism of a lot of English," she says. "And he was also a famous healer and miracle worker." 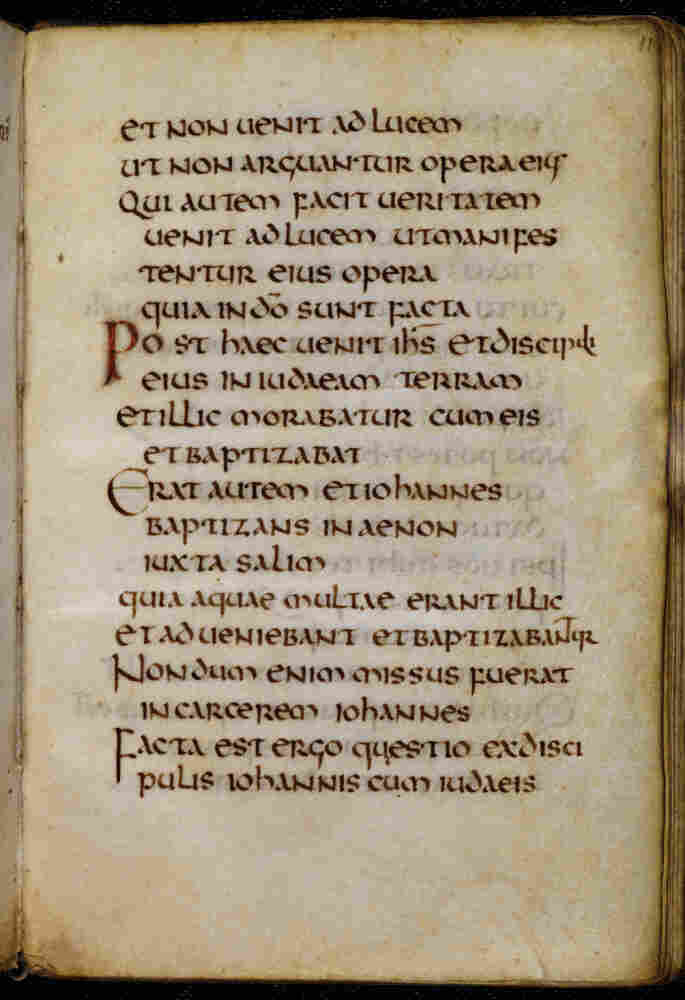 The manuscript is a copy of the Gospel of St. John. Courtesy of the British Library hide caption 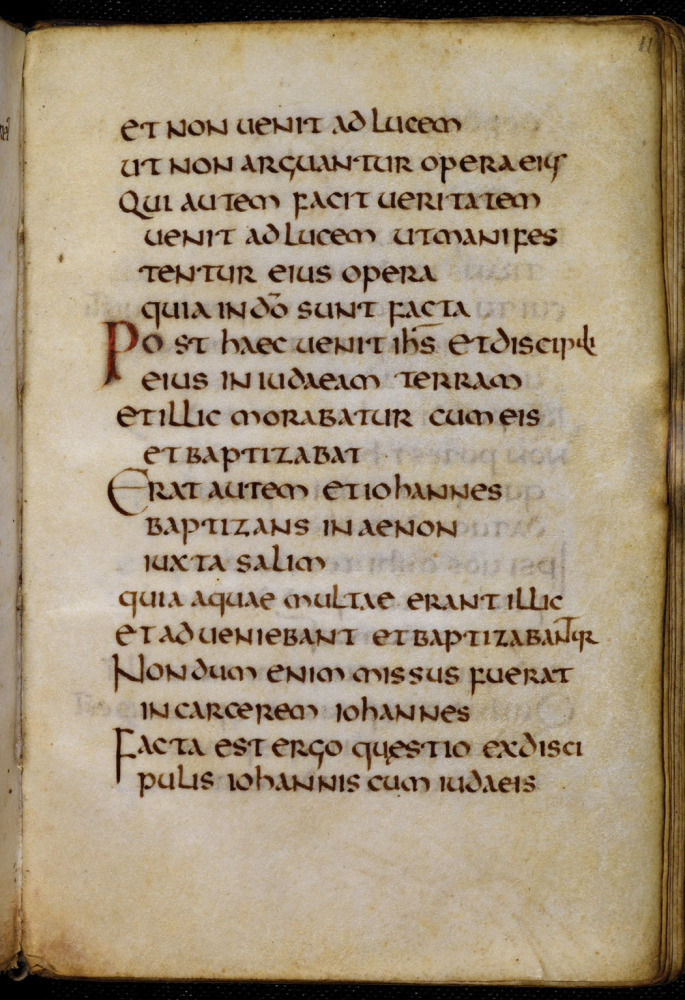 The manuscript is a copy of the Gospel of St. John.

"The Gospel was placed in the coffin of St. Cuthbert, right at the end of the seventh century, so over 1,300 years ago, when he was elevated to sainthood," Breay adds.

The book stayed in the coffin even after Vikings began raiding the northeast coast of England, forcing St. Cuthbert's monastic community to leave their island home of Lindisfarne. But they carried the coffin — and the book — with them when they left in about 875.

"Eventually they settled in Durham," Breay says. "And then after the Norman conquest [of 1066], with the foundation of a new Norman cathedral in Durham and the creation of a new shrine for St. Cuthbert, the coffin was opened in 1104, and the book was discovered intact inside the coffin."

The story doesn't end there. By the early 17th century, the book was in private hands, and in 1769 it was donated to a Jesuit community in Belgium. "And they have owned the manuscript for almost 250 years, until it's been bought now by the British Library as the result of the largest fundraising campaign that we've ever held," Breay says.

The book had been on loan from the Jesuits since 1979, but Breay says the purchase means the British Library will now be able to invest public money in long-term preservation and interpretation of the Gospel.

"One of the things we really want to achieve through having it in public ownership is to raise awareness of the importance of this book," she says. "Because for a book that is so important, it isn't really very well known."