Accessibility links
Grief In Greenness: Two Melancholy Poems Of Spring Some of the best poets of spring are masters of the minor key. So it's no surprise that the famously dour Philip Larkin wrote two of the finest spring poems of the last century, according to critic David Orr — who offers his appreciation. 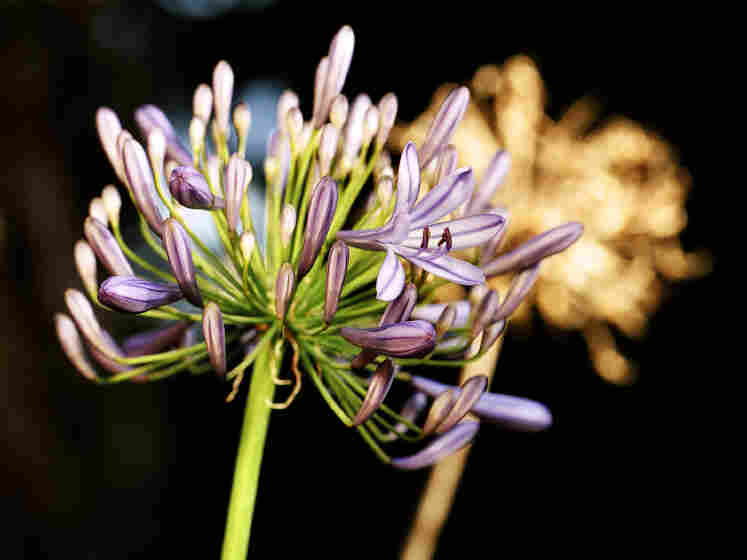 Springtime is the season of renewal, but it can also be a season of ambivalence. After all, for something to be made new and fresh, it first has to have gotten old and worn. Perhaps this is why some of the best poets of spring are masters of minor-key feelings like doubt, sadness and regret — every rebirth, as they know, contains a little death.

The English poet Philip Larkin (whose Complete Poems were recently published) is a famously melancholy writer, so it's no surprise that he also wrote two of the finest spring poems of the last century. Larkin's poetry usually involves a wry, sensible, self-mocking persona that serves as a barrier against an oceanic emotional current — reading his best work is like being served tea on the edge of a steadily eroding cliff.

Often, this unstable arrangement emerges as a shift in diction and tone. He'll begin a poem in an aggressively conversational idiom ("Announcements, splutteringly loud. // Clash with the quack of a man with pound notes round his hat"), and then end in a very different register ("Let it stay hidden there like strength ... something they share / That breaks ancestrally each year into / Regenerate union. Let it always be there."). Other times, the tension between Larkin's persona and his actual feelings resolves into a classical balance that is as poignant as it is precarious.

That balancing act is evident in both of Larkin's spring poems. The first is from 1950, and is called "Coming."

On longer evenings,
Light, chill and yellow,
Bathes the serene
Foreheads of houses.
A thrush sings,
Laurel-surrounded
In the deep bare garden,
Its fresh-peeled voice
Astonishing the brickwork.
It will be spring soon,
It will be spring soon --
And I, whose childhood
Is a forgotten boredom,
Feel like a child
Who comes on a scene
Of adult reconciling,
And can understand nothing
But the unusual laughter,
And starts to be happy.

Spring, Larkin tells us, speaks to emotion, not reason. Just as a child can't understand adult conflict, yet is instinctively pleased by its resolution in laughter (which Larkin carefully notes is "unusual"), we can neither comprehend nor control our response to seasonal renewal. We just like it. And we like it even though the reality of the state to which it reduces us — childhood — isn't necessarily desirable ("I, whose childhood / Is a forgotten boredom").

"Coming" therefore gives us a kind of circular thought process: Spring makes us happy, but it is irrational happiness — but it is still happiness ... and so on. Those competing conclusions churn beneath the smooth surface of the poem and give it a rotating force that is practically seasonal.

The trees are coming into leaf
Like something almost being said;
The recent buds relax and spread,
Their greenness is a kind of grief.

Is it that they are born again
And we grow old? No, they die too,
Their yearly trick of looking new
Is written down in rings of grain.

Yet still the unresting castles thresh
In fullgrown thickness every May.
Last year is dead, they seem to say,
Begin afresh, afresh, afresh.

"The Trees" sets up a contrast between what trees "seem to say" and what we can actually learn from their springtime revival. First, Larkin tells us that "their greenness is a kind of grief," and asks whether this sadness comes from our knowledge that "they are born again / And we grow old." But he rejects this notion: "No, they die too."

Indeed, despite what the trees' new leaves "seem to say" and what is "almost being said," the truth is "written down" in the growth rings inside their trunks (and of course, in the poem itself). Trees grow older. At some point, there will be no more rings, and they will die. The rings — usually a symbol of eternity — here convey the opposite: the trees' mortality. The poem's penultimate line is therefore delicately ironic: "Last year is dead, they seem to say" — but this, as we know from the previous stanza, is a "trick." The only thing that doesn't actually end is time.

And yet, as in "Coming," the tone of the poem argues against its bleaker conclusions. "Begin afresh, afresh, afresh": The words are attributed falsely to the trees (which can't speak), and they aren't even true, in the sense that birth is the only truly "fresh" beginning. But they feel true. Again, we're in the grip of a circular debate between what we know to be the case and what we want the case to be.

The desire that Larkin frames is the same one Emerson writes about in his essay "Circles." "The one thing which we seek with insatiable desire," Emerson says, "is to forget ourselves, to be surprised out of our propriety, to lose our sempiternal memory and to do something without knowing how or why; in short, to draw a new circle." Or, one might say, to see another spring arrive, in all its ambiguous glory.

David Orr writes about poetry for NPR Books and other publications. His most recent book is Beautiful & Pointless: A Guide to Modern Poetry.

"The Trees" and "Coming" are excerpted from The Complete Poems by Philip Larkin, edited and with an introduction and commentary by Archie Burnett. Published by Farrar, Straus and Giroux, LLC. Copyright 2012 by The Estate of Philip Larkin. All rights reserved.