Accessibility links
Working Moms' Challenges: Paid Leave, Child Care The past week's political firestorm has focused on stay-at-home moms. But more than 70 percent of women with young children now work. And they're hoping the presidential candidates address some of the challenges they face balancing a job with kids. 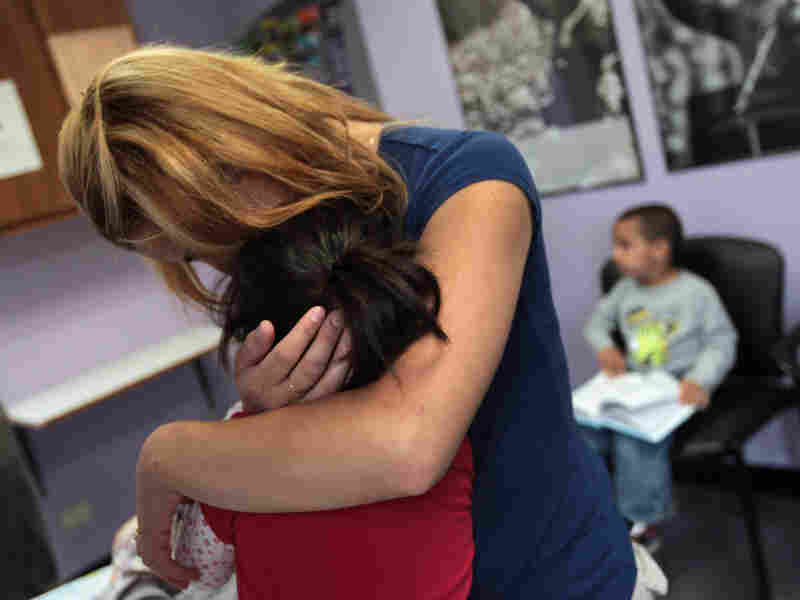 Many working mothers say their employers don't support them when they need to tend to a sick child. In this file photo, a single mother holds her child at a health clinic in Colorado. John Moore/Getty Images hide caption 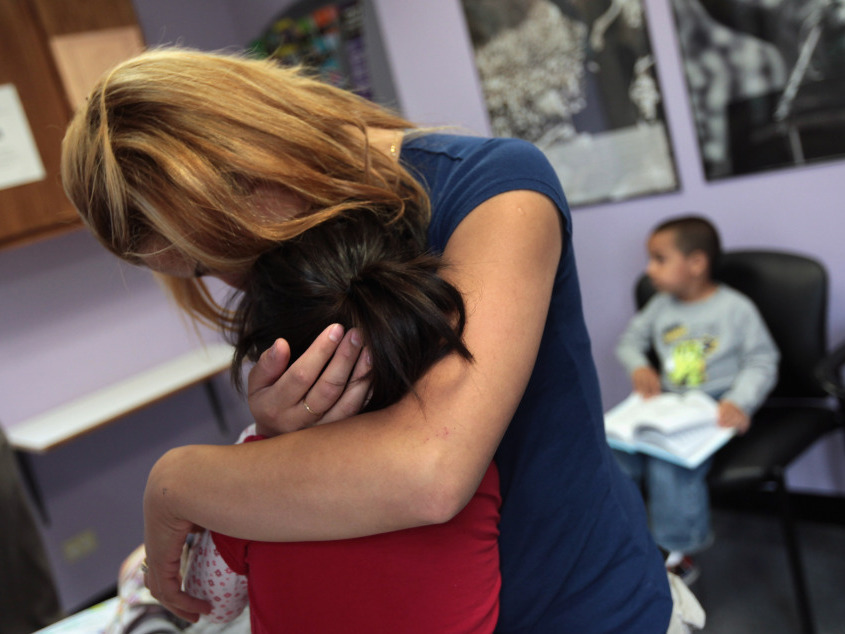 Many working mothers say their employers don't support them when they need to tend to a sick child. In this file photo, a single mother holds her child at a health clinic in Colorado.

The past week's political firestorm in the presidential race focused on stay-at-home moms, but two-thirds of women with young children now work. Nearly half are their family's primary breadwinner. What some feel is being lost in the political debate are the challenges they face in the workplace.

When Kids Get Sick

"We unfortunately have a number of workplaces that operate as if workers are still men, with wives at home full-time," says Ellen Bravo, who heads Family Values at Work, a coalition that promotes paid-leave programs.

"So many moms are dying to be able to stay home at the most important moments — namely, when they give birth, and when their kid is sick — and aren't allowed to do so," she says.

That was the case for Marianne Bullock a few years ago, when her 18-month-old had a stomach virus.

"It was the first time that my daughter had really been sick," she says. "She was not nursing, and she was lethargic."

Bullock was a personal care assistant in Massachusetts; that day, she called in sick. The next day, she had to take her daughter to the hospital, where she was hydrated. The third morning, her daughter seemed better and Bullock got ready to leave for work.

"As I was walking out the door, she vomited again," Bullock says. "And I was like, 'I just have to take her to the hospital.' And so I called in — and when I called in, the care manager that I spoke to said, 'You just might as well not come back.' "

Bullock was fired. She says the manager actually told her they'd rather hire someone without a child. 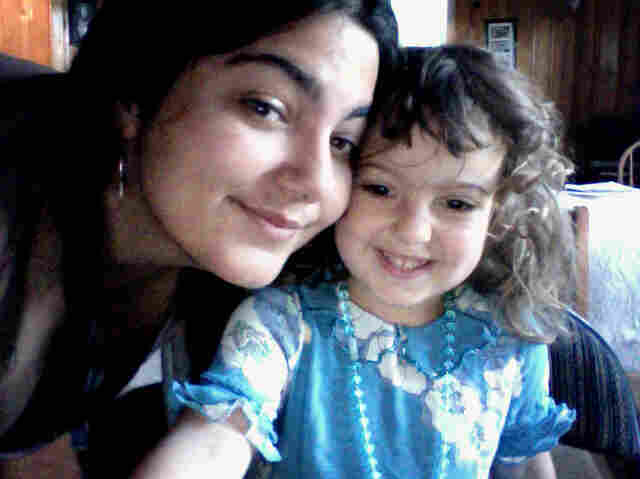 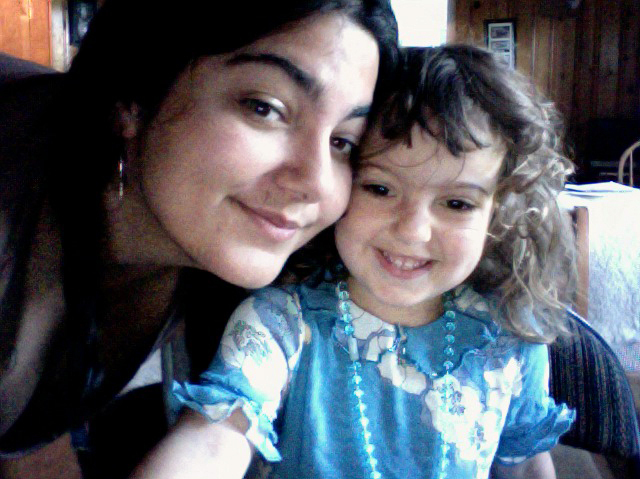 A few years ago, Marianne Bullock lost her job after she took time off to take care of her daughter, who was suffering from a stomach virus.

Many companies do offer generous leave policies, and this year Connecticut became the first state to mandate sick leave. But the United States is one of the only developed nations with no federal policy requiring paid leave.

Like many mothers, Amy Krohn works part time — in her case, for a municipal government in Ohio.

"I didn't, for about five years, have any paid time off," she says. "So, I had no sick time, no vacation time."

For her, staying home with a sick child has meant economic hardship. Even when Krohn was sick, money came into play. She once got strep throat when her husband was out of town. She took her two kids to day care because she didn't feel able to care for them. But then she worried.

"The fact that I had to take them to day care, and pay for it, really made me feel like I needed to go to work," she says. "So I actually went to work with strep throat, and just tried to avoid people and not get the whole office sick."

Kristin Rowe-Finkbeiner, head of the mother's advocacy group MomsRising, says having a baby is a leading cause of temporary poverty. Many women with no maternity leave end up quitting their jobs to care for a baby.

"And when they lose those needed jobs, it's very hard to get back into the labor force," she says, "because all of a sudden, we have a cascading impact of motherhood. Right now, child care costs more than university costs in many states in our nation."

Combine that with women's unequal pay — and it's worse for mothers — and, Rowe-Finkbeiner says, some see no choice but to stay home, because they can't afford child care.

She feels these issues help explain the current political gender gap. It's largely Democrats who champion paid leave and equal pay legislation. Republicans tend to join business groups in speaking out against them.

"We think employers are in a better position to offer that voluntarily, rather than having a one-size-fits-all federal leave mandate," says Lisa Horn of the Society for Human Resource Management.

Horn says more businesses are trying to be more family-friendly on their own. But she says a mandate creates problems.

"It hampers an employer's flexibility in tailoring those leave programs," Horn says, "and at the same time adds that compliance burden, and that's costly. Many simply just can't afford it."

Especially, she says, in this bad economy, when businesses are trying to create jobs.

Whatever the solution, the challenges of balancing work and family may yet play big on the campaign trail. Women make up more than half the electorate, and both parties will continue to heavily court their votes.