Accessibility links
'Marley': A History On Film Of The Man Turned 'Legend' Bob Marley has been used to brand everything from a clothing line and coffee company to his own museum and a resort in the Bahamas. A new documentary seeks to reconstruct what the reggae singer was like in real life. 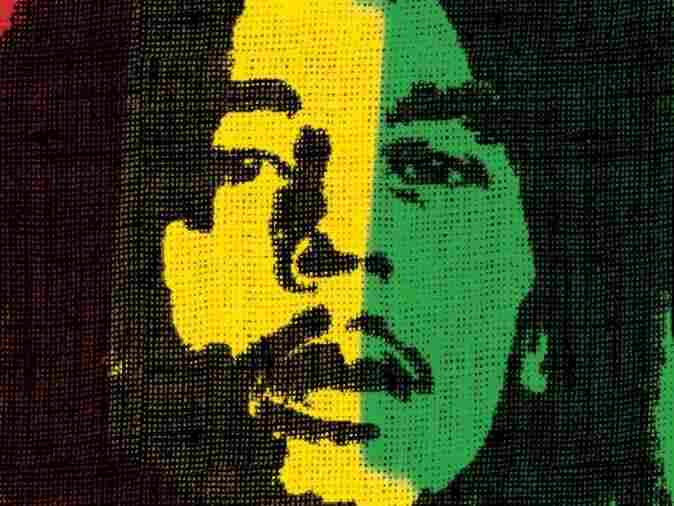 Detail from the Marley movie poster. Courtesy of the filmmaker hide caption 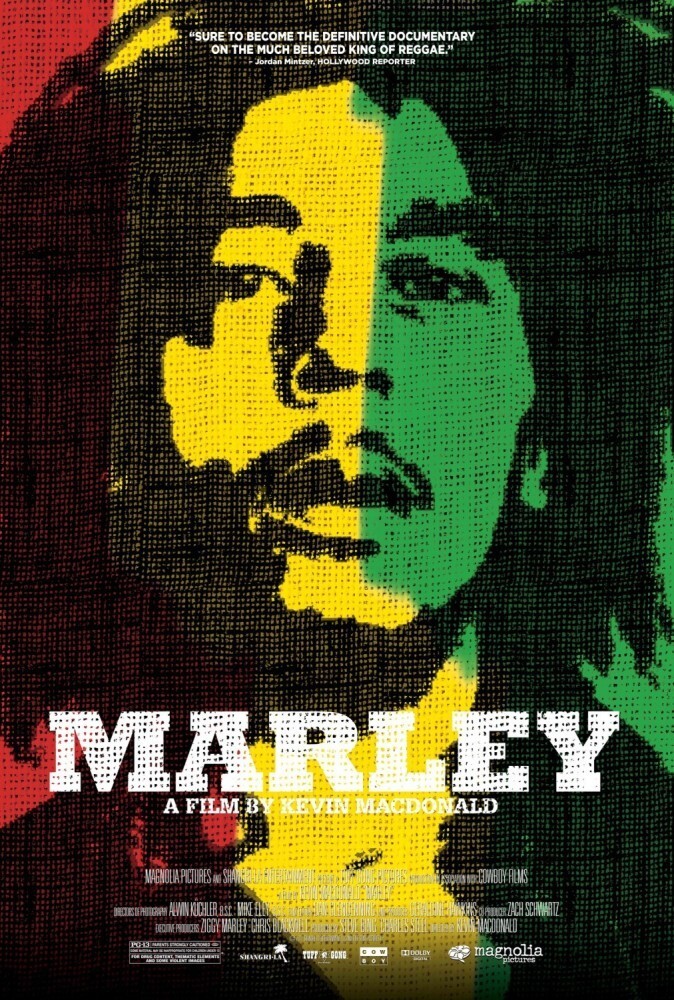 Detail from the Marley movie poster.

Courtesy of the filmmaker

Do you know Bob Marley? Sure, you do. Maybe you're among his 33 million Facebook and Twitter followers. Maybe you own a Bob Marley ashtray, or one of 400 or so books about him. You definitely know a few of his tunes by heart — like "One Love," which Jamaica's tourism board has featured in commercials for years. But the reggae singer's son Ziggy has news for you: You don't really know Bob Marley.

"Over time, he has been summed up as just a ganja-smoking reggae singer, all love and peace — which is a part of it, but not the full story," Ziggy Marley says. "There was another side."

That other side is what Ziggy set out to capture in the film Marley, which he executive-produced.

"Being Bob's eldest son, I never read a book or anything that anyone did on Bob, because I was like, 'Who are these people?' " he says. "I reached a point where I said, to represent my father properly, I need to be involved in a definitive thing."

Ziggy Marley enlisted Scottish director Kevin Macdonald to make that definitive film. Macdonald is best-known for his feature films, including The Last King of Scotland. The filmmaker recalls his first meeting with Ziggy Marley as one of initial skepticism and eventual agreement.

"He said, 'What kind of film do you want to make?' And I said I want to make a film about the man behind the icon," Macdonald says. "We're all so overinundated with Bob Marley imagery and the commodified version of Bob Marley. His music is everywhere, and yet I never felt like I knew who the man was, and what he was really singing about."

But can any film really capture the man behind the myth? It's a daunting task — and Macdonald isn't the first to attempt it. British director Jeremy Marre has made several documentaries about Marley and says there's precious little interview footage of the man himself. The Jamaican Broadcasting Commission even recorded over early footage of The Wailers because the broadcaster was short of tape.

"He's a tough one. He's very difficult to read," Marre says. "He didn't give much away, he didn't give many interviews; he was deliberately obscure in many of the interviews. So how close can you get to the real Bob Marley?"

The new documentary relies on other accounts: interviews with everyone from Marley's mother, his wife, Rita, and two of his 11 children, to his only surviving original bandmate, Bunny Wailer. There are also interviews with several girlfriends and the mogul who took Marley mainstream, Island Records chief Chris Blackwell. Macdonald calls his film an "oral history."

"Bob's voice is quite faint in the film," Macdonald says. "But through all these different voices around him, you build a rounded portrait."

Those voices are not foolproof. Christopher Farley, author of Before the Legend: The Rise of Bob Marley, says sifting through accounts of the singer is quite a feat.

"Here's the thing with Bob Marley and any famous figure: When you go back and talk to people who knew them way back when, everybody feels that they were an important part of their lives," Farley says. "'I taught him how to play guitar! I helped him write his first lyric! I helped him eat soup first!' Everyone sees them at the center of the great man's story. Sometimes it's very sincere, sometimes to the best of their knowledge it's honest — but not the whole of it is true."

Farley's book proved that there were still revelations to be had about someone as overdocumented as Bob Marley. Much has been made of the singer's mixed-race background: His teenage mother was black and his father was always thought to be a white Jamaican in his 60s. But Farley says Marley's father was racially mixed, not white. Macdonald's film puts this other side of Marley's family on camera for the first time.

"I said to [Marley's daughter] Cedella Marley, 'I really want to talk to the white Marleys.' And she said, 'Oh, I know them — they're our cousins. We used to live next to them when we lived in Kingston,' " Macdonald says. "So she gave me the number and I phoned them up, and one of them was willing to talk."

In that interview, Peter Marley, Bob's second cousin on his father's side, talks about the time Bob walked into the family construction business seeking money from his relatives — who rejected him. Bob wrote the song "Cornerstone" about that rejection.

Another candid moment in the documentary is Rita Marley's admission that she was less of a wife to Bob than a "guardian angel," skilled at ejecting girls from her husband's dressing room. Macdonald says such moments prove that although his film is authorized by the Marley family, it's no whitewashed portrait.

"You only have to see the film to know that they're not being very protective, because there's a lot of stuff which one would think Rita might find difficult, to do with other women in Bob's life — and there were many, many of them," Macdonald says.

Authorized or not, the new documentary does not solve the biggest mystery about Bob Marley: Who was behind the attack on his life in 1976, when bullets were fired on his Kingston home? One of the Jamaican political parties' gang enforcers, or the CIA, anxious about Marley's influence? Unsolved mysteries like that, author Farley says, ultimately fuel the Marley industry.

"That is part of the fascination with Bob Marley," Farley says. "No matter how close you get to him — like those mountains in Jamaica, shrouded by mist — you keep walking toward them and they are still shrouded by mist. There's still more to find, a path to get past the mist."

That adds up to good news for authors and filmmakers: When it comes to Bob Marley, it seems, there's no such thing as the last word.